Why do earth cuts sometimes have steps on their walls

A neat image from Wikipedia: 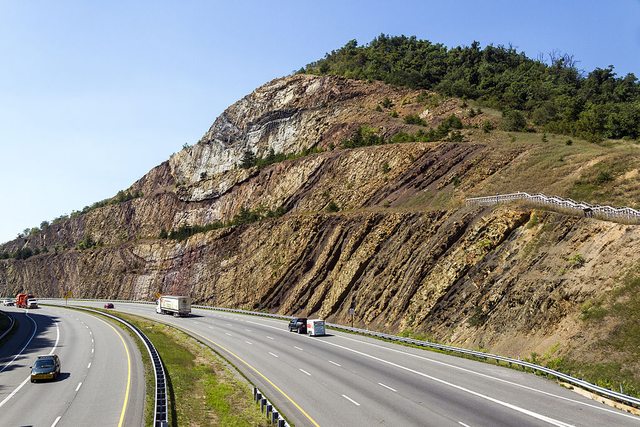 There're clearly visible steps on the cut wall. This makes the cut wider at the top and so requires more work so those steps have some serious reason behind them.

What's the purpose of these steps?

The main reason for the stepped arrangement of the slope is slope stability and safety.

Such walls/cuttings are divided into two components:

By having a stepped arrangement, material and hence weight, is removed from above the toe of slope (where the bottom part of the slope meets the ground). This reduces the pressure at the toe of the slope and assists with the stability of the slope. This is critical because should the toe fail, the whole wall/slope will fail. To further assist with toe pressure reduction and slope stability, the sub vertical parts of the wall generally have a slope themselves. The maximum angle of each wall component is determined by a geotechnical analysis, which considers things such as: rock mass rating, joint orientation, joint persistence, conditions of joints (joint infill, joint friction, presence of slippery minerals such as talc), RQD (Rock Quality Designation), rock strength. In stronger and more component rock the angle can be steep. In weaker and less component rock, the wall angle will be shallower.

Depending on local terminology and whether the slope is for civil or mining purposes, the flat sections of the stepped slope are called benches, catch benches or berms. In addition to stepping the slope back into the in-situ rock, the benches catch smaller rocks and rubble that can fall off the wall from time to time. The wider the benches the better, firstly due to the increased offset of the wall and pressure reduction at the toe, but also the increased capacity to catch rocks falling from the slope above.

They provide a terrace on each level.

Which result in a more stable pyramid shape of the remaining hill that is less likely to collapse onto the road. And it removes/alleviates the need for a strong retaining wall.

Not the answer you're looking for? Browse other questions tagged civil-engineering geotechnical-engineering roadway or ask your own question.

7
Building a steel footbridge over a railway line and its catenary
8
Why build a cell lattice tower with square cross-section instead of triangular cross-section?
3
Are light coloured roofs more durable? If so, why aren't they more common?
8
Why are creeks sometimes piped underground in urban areas?
6
Concrete formwork - best approach to counter uplift forces, for a freestanding pour?
0
Why do we have profiles with fraction millimeter dimensions?
24
Why does this fence have a kink?