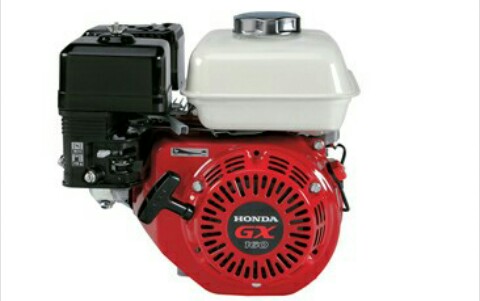 The engine you picture has a "comfortable" design speed of about 3600RPM. It has valves operated by pushrods. Inertia in the valve-actuating mechanism limits its rotating speed to no more than about 2X 3600RPM or 7200RPM. To go faster than that requires re-engineering the engine for an overhead cam system (with reduced inertia) for a start, but there are other issues that must be dealt with.

For example, the induction system which supplies fuel and air mixture to the cylinder is proportioned to support a flow rate which matches the design speed of the engine. Tripling the design speed requires re-engineering this with a much-shortened manifold tube and a carburetor which can supply 3X the flow rate so the engine does not choke out at the new, higher RPM.

The "3X" engine will be generating heat at 3X the rate of the original, which must be gotten rid of. Since the fan that cools this engine runs at the same speed as the crankshaft, one would think that heat rejection is not a problem, but the finning pattern in the engine must be modified so as to pull heat out of the head (where the valves and valve seats reside) much faster than that required to support a 3600RPM engine, to prevent the valves and seats from overheating and getting burnt.

Similar comments apply to the lubrication system in the engine as well.

Now we come to final drive and reliability issues. Tripling the engine speed requires a redesign of the reduction system in the final drive, to maintain the prop tips subsonic. It also requires a prop redesign, to absorb 3X the power of the original engine.

Your "3X" engine will wear itself out in 1/3rd the time as the original design since its parts are moving 3X faster- but even if that were acceptable, what won't be is the overall reduction of reliability which accompanies an engine that fundamentally runs hot. So while racing motorcycles can use engines that run at 16,000 RPM, it's OK for them to blow up after one season's worth of races since they get torn down and completely rebuilt after ~tens of hours at 16,000RPM. For high-reliability applications like aircraft, you want a two-thousand-hour engine to statistically ensure an acceptably low failure rate in 1,000 hours of operation.

5
How can I increase the CFM of my ceiling fan?
0
Twin cylinder engine opposed cylinders
3
What is this V-shaped strut on the landing gear for?
1
What does the torque curve of an engine mean?
0
Relation between engine's displacement (cc) to its power
1
How to calculate the output power of engine exhaust
0
Would this air amplifier attachment increase a leaf blower's effectiveness?