In spring design, there a a variety of parameters to consider. Some of the parameters are solely physical (wire diameter, coil diameter, length, etc.) and some are determined from the physical dimensions in combination with the material properties (spring constant, allowable stress, etc.).

One physical characteristic of a spring is whether or not it will experience set. This is a permanent deformation of the spring after it has been compressed. Whether or not set is an issue depends on the level of stress that the spring undergoes versus the material's tensile strength.

The reason that spring set can be compensated for is that it occurs after only a few cycles and then the full amount of set has been reached.

Creep is a separate phenomenon from set. Set happens immediately, but creep happens with constant load over time. Since the metal is under stress, it should exhibit creep. Creep is also affected by temperature.

I want to know how a spring is affected by long-term constant load. I have not been able to find any information about creep in springs or how to calculate it during spring design.

Your question is insufficiently constrained.

The short answer is that you haven't provided enough information to give a complete answer: creep is complicated enough for a single material, however there are a variety of mechanisms depending on the material, temperature, normalised stress, time etc etc. In a "generic metal" the below diagram is a fair place to start for determining which mechanism you are working with, but those breakpoints will still change with the material. Obviously something like aluminium stops behaving like a solid metal well below 3000 deg C.

Some nickel superalloys experience less creep at higher temps, although these are exotic and extremely expensive.

If your question truely is "How is this determined for a specific spring of a specific material?" then the answer is disappointingly simple: put your spring in a constant temp oven for a range of very long times and a range of loads and measure what happens. It doesn't matter by which mechanism it is creeping, all you want to know is how it will respond in time to that load at that temp.

Edit: following your comment I feel I understand that what you are asking slightly better so should revise the answer accordingly. Whilst it is always best to test your parts creep is particularly nasty in that you can't get your answers quickly and it tends to be expensive. A material would help more than anything else here, but here is a suggested design method (I am not familiar with the design of springs to alleviate creep, this is just a common sense set of suggests from a fellow engineer):

Please consider that the first step that one would take to alleviate creep (decreasing the normalised stress) will change the characteristics of your spring which likely restricts you to a material change or a different spring design.

The contents below are extracted from the linked wiki article that seems to contain the clues to your question.

In the secondary, or steady-state, creep, dislocation structure and grain size have reached equilibrium, and therefore strain rate is constant. Equations that yield a strain rate refer to the steady-state strain rate. Stress dependence of this rate depends on the creep mechanism.

In tertiary creep, the strain rate exponentially increases with stress. This can be due to necking phenomena, internal cracks, or voids, which all decrease the cross-sectional area and increase the true stress on the region, further accelerating deformation and leading to fracture. 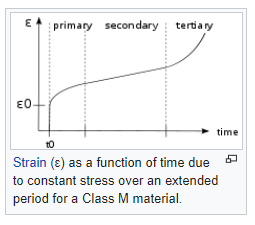 Deformation mechanism maps provide a visual tool categorizing the dominant deformation mechanism as a function of homologous temperature, shear modulus-normalized stress, and strain rate. Generally, two of these three properties (most commonly temperature and stress) are the axes of the map, while the third is drawn as contours on the map.

At high stresses (relative to the shear modulus), creep is controlled by the movement of dislocations. For dislocation creep, Q = Q(self diffusion), m = 4–6, and b is less than 1. Therefore, dislocation creep has a strong dependence on the applied stress and the intrinsic activation energy and a weaker dependence on grain size. As grain size gets smaller, grain boundary area gets larger, so dislocation motion is impeded.

Some alloys exhibit a very large stress exponent (m > 10), and this has typically been explained by introducing a "threshold stress," σth, below which creep can't be measured. The modified power law equation then becomes:

Not the answer you're looking for? Browse other questions tagged mechanical-engineering springs or ask your own question.

1
A creep mathematical model of alloy steel for making springs

3
How much force does a lock's pin have due to the spring?
4
How is shelf deflection determined?
0
What affects the spring constant or spring life spans?
0
How would I calculate a force on a spring? Or more specifically the weight of an object that spring is supporting
2
Are spring constant and rate constant the same thing?
1
Is the Spring Rate for a Belleville Spring Linear?
1
How to build an Adjustable Tension Spring?
4
What is the purpose of dead coils in the middle of a compression spring?