Which part of an aircraft can most benefit from a structural health monitoring (SHM) system?

In order to reduce operational cost and improve the safety and reliability of aircraft's the aerospace industry and government is increasingly evaluating new ideas such structural heath monitoring systems for aircraft's. Such a system will enable continuous monitoring, inspection and detection of damage to the aircraft with minimal human involvement. This will also help the airline industry to improve aircraft maintenance scheduling process. 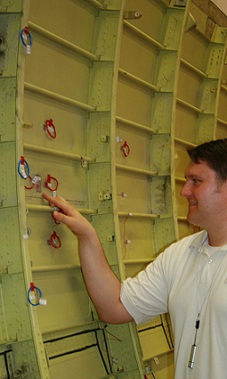 Currently Delta airlines and an aircraft manufacture has teamed up with Sandia Laboratory to install sensors in aircraft to help understand flaw detection. Research also indicates that ultrasonic sensors are most widely used sensing element.

Question:
Which part of an aircraft can most benefit from structural health monitoring (SHM) system? Is it the fuselage, wings, landing gear, flaps, rudder, elevator, vertical stabilizer or another component? Why is this component the prime candidate?

Based on these considerations, problems I would expect are of interest are:

Wings and fuselage are going to be best to demonstrate the sensor engineering principles. Pylons and landing gears (excepting any steel parts) would present the most insight perhaps.

4
What is a good sensing element to monitor corrosion in a bridge structural health monitoring system?
1
How to reduce oscillations (rapid changes of control signal) when controlling a real system, which occur due to noise in measurement from sensors?