Frequency Response of a Discrete System

Let's say that I have the following continuous system:

I could convert it to a discrete system using for example the Tustin approximation https://en.wikipedia.org/wiki/Bilinear_transform

So I replace s with:

Hence I get the approx. discrete transfer function:

Now my question is, how can I compute its frequency response ?

In the end, I would like to be able to compare the discrete approx. freqe. response with the freq. response of the continuous original transfer function.

In order to see why you have to substitute $z$ with $e^{T_e\,j\,\omega}$ you can consider the transfer function $z^{-1}$, which is a delay of $T_e$. So the response to $\sin(\omega\,t)$ would be $\sin(\omega\,(t-T_e))$ which is equivalent to $\sin(\omega\,t-\omega\,T_e)$. The frequency response function should therefore have a constant magnitude of one (or 0 dB), since the output sine wave always has the same amplitude as the input sine wave and the amount of phase shift the output has relative to the input is $-\omega\,T_e$. It can be shown that both the amplitude and phase are captured by $e^{-T_e\,j\,\omega}$, where the minus sign is because we are considering $z^{-1}$ instead of $z$. 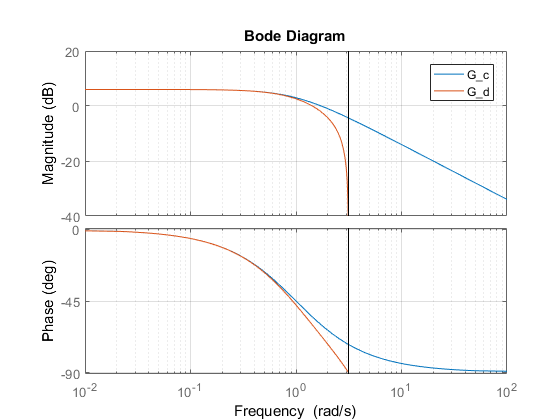 Not the answer you're looking for? Browse other questions tagged mathematics transfer-function systems-engineering or ask your own question.

10
Response of a system to a step function (Heaviside function)
1
Closed loop response of a discrete system
3
What are the Singular Values of a dynamic system and how are they calculated in the *sigma* function in Matlab?
1
Phase response of a continuous transfer function
2
PI controller for second order system
0
How to find Performance assessment (IAE and ISE) of a PID Controlled system?
4
How to determine the dynamic response of a spring-mass system?