This is a great question, though I feel it should be refined a bit and have the main question stated more explicitly. That being said, I will attempt to answer it with the assumption that the question is: Why does the energy consumption of major equipment increase non-linearly with mass feed rates in a processing facility?

In any processing facility, you have different forms of input energy. In the vast majority of facilities, you have some sort of industrial heat source (coal, more often natural gas) and usually electricity. Considering this, there are three main areas where you'll notice what are called Economies of Scale.

The first is individual unit operations. A great example is a typical distillation column utilizing sieve tray style separation, and attempting to separate a two-species mixture (Ethanol-Water as an example). The individual unit op (in this case distillation) has a design tray vapor and liquid flux rate. This flux rate is generally fixed based upon the physical characteristics of the binary mixture (determined by viscosity, A-B interactions, azeotropes etc). The total flow rate of the column then, is fixed based upon the cross sectional area of each tray (the surface area). In this instance, if you try to run the column too slow, you'll end up with weeping, which causes thermodynamic inefficiencies in the separation. Running the column too fast causes entainment, which also causes inefficiencies. When most unit ops are designed, they are designed to have some wiggle room for rate, but they usually are designed slightly larger than the intended rate. If we look at the Wikipedia provided image for economies of scale below, you can see if we lie on the left hand side of the curve as we would if the column was over-designed, then pushing the column harder would drive our specific unit cost (or specific unit energy) down. The caveat is that you aren't always on the left hand side of the curve. 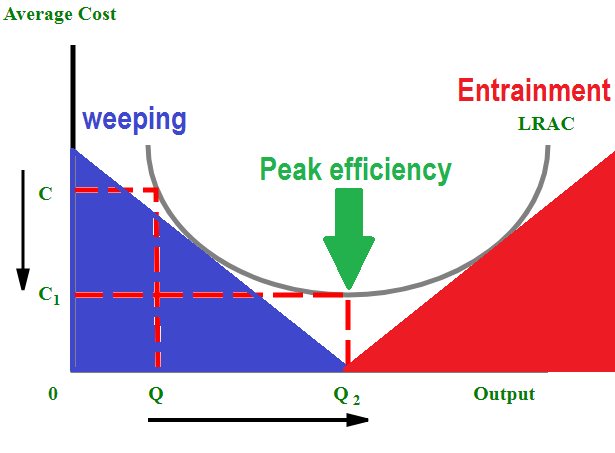 The second phenomenon is heat recovery. While you cannot change the energy required to separate ethanol and water in the above example, you can recycle the heat from the distillate and the column bottoms. In most processing facilities this takes place in a heat exchanger. The governing limitations for heat transfer are the total temperature difference (Hottest temperature of the hot stream - coldest temperature of the cold stream), surface area of the heat exchanger, and the heat transfer coefficient. When pushing an existing production facility, you're likely not going to spend extra capital to up-size heat exchangers (at least not at first), and the process temperatures are limited to the physical requirements of the process, so changing delta T is out. But we CAN increase the heat transfer coefficient by running flow faster (and with more pressure drop across the exchanger). If you think about an example as the distillate being condensed from the top of the column exchanging with the feed flow to the column, having higher flow rates of either or both streams will produce better heat transfer coefficients and result in more heat recovery. This directly translates to a lower energy input into the process, and a lower specific energy for the product.

The final is fixed costs, or more specifically fixed energy costs. In any production facility, you have hundreds if not thousands or even tens of thousands of electric motor driven pumps, and process control equipment being powered by compressed air. While some electric motors do have Variable Frequency Drives, they can be prohibitively expensive to put on certain motors (4160 Volt VFD's can costs hundreds of thousands of dollars for just one which makes it hard to pay itself back). So if had a 500 kW motor running 24 hrs a day and you made 500 units, (500*24/500), you would use 24 kWh of energy to produce those units. But if you sped the plant up and produce 1000 units, you would have only used 12 kWh to produce those units. This is the fundamental working of economies of scale. Similarly, compressed air driven control equipment operates like this. A control valve doesn't care whether you're flowing 10, 100 or 1000 GPM, it's going to use (roughly) the same amount of compressed air energy. This lends itself to the same economies of scale effect.

To expound further, there are also Dis-economies of scale. This is the antithesis of an economy of scale, and manifests itself as the right hand side of the graph shown on the Wikipedia article. a Dis-economy of scale is occurring when increasing unit production actually causes an INCREASE in specific production cost (or energy cost in our analysis). This could be something like the distillation entrainment example, pushing phase change equipment (reboilers, evaporators etc) past their Critical heat flux and causes heat transfer inefficiencies, or not having enough retention time for chemical reaction unit ops (Fermentation, catalysis, polymerization etc). I've experience a real world example of this where attempting to push a distillation column too fast outpaced the reboiler system capacity and caused excessive live steam injection into the column, drastically increasing water consumption & total energy into the column. Dis-economies of scale are great opportunities for de-bottlenecking.

Not the answer you're looking for? Browse other questions tagged chemical-engineering or ask your own question.

2
How to estimate power consumption for an oven given volume?
4
Can I control latent/sensible heat changes in a counter-flow, induced draft cooling tower using climate?
1
Energy balance for a system
1
Can CO2 produce energy to drive a bot
2
Calculate the specific surface area of a mesoporous sample
0
Identify plant transfer function to design PID controller
0
How to use a specific list of components in a stream in ASPEN-HYSYS?
1
What kind of magnetic water conditioner can industrial sinter plant use?