How to determine how large each terrace should be on a multi-level retaining wall?

I am making a concrete sleeper wall and am unsure of the current structural integrity (I am not a civil engineer) specifically regarding the width of each terrace.

My retaining wall will be made from concrete posts, and sleeper slats with rebar as a reinforcer: 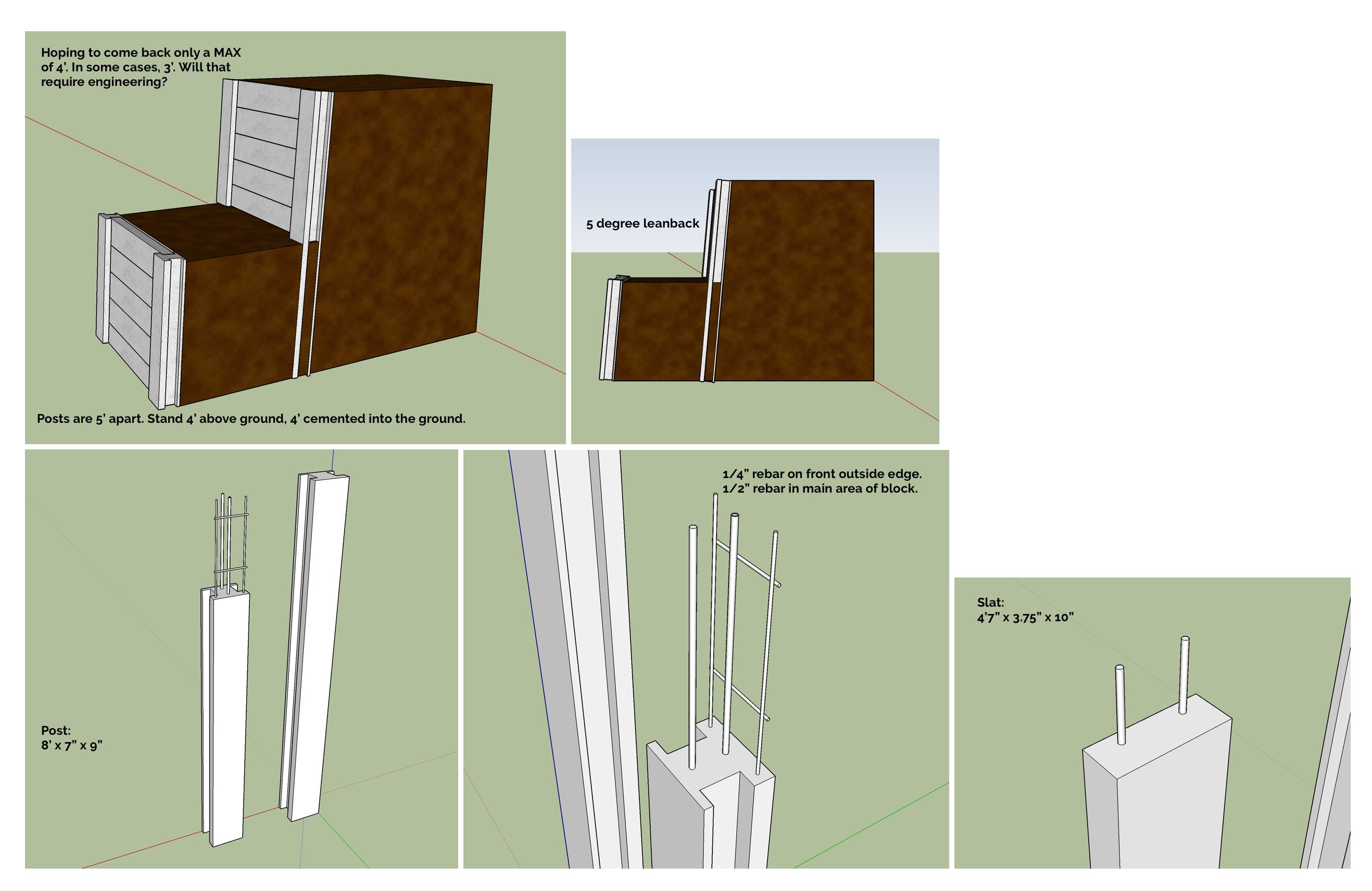 I hope that my rudimentary drawings provide enough information.

I have a 5 degree lean back on each terrace of the wall, and each post, and slat is reinforced. However, I do not know how to determine if 4' for each terrace will cause integrity issues. If possible, I'd like to go down to 3' per each terrace. Is there a way to calculate this, or a rule of thumb for these types of retaining walls? Is there a point where I have to use geo-grid reinforcement?

Design of retaining walls has to deal with many factors and there is no typical design but for heights of less than 4 feet and even then for soils of known competence, in California at least, which I am aware of.

Some of the factors are:

Type of the soil to be retained and its properties such as density, cohesion, compaction ratio, bearing capacity, underlying strata.

Factors affecting the stability of the retained soil and general grade and geology supporting it. Even statistics of flooding or seismic activity or subterranean water levels.

Usually, for any job other than short garden walls, the services of a soils engineer are needed. And they will test in situ conditions, assessment of site geology, define the type and height of the walls allowed and passive and active soil pressure and expected seismic load and allowable settlements.

Then a civil engineer using their numbers and recommendations will design the retaining walls. If there is provisions for tiered setbacks it will be in the soils engineer report, because they would define the influence angle of surcharge on the foundation.

Please note that in many municipalities, you are required to apply for a building permit before undertaking the construction of anything which requires the moving or excavation of more than a certain quantity of earth on the site.

This is true for construction of retaining walls and the like.

Even if you derive what you consider a safe design for this project, if the city or county discovers your project and you do not have a permit on file, it is likely they will require you to tear it down- especially if, for example, the drainage pipes you put in there are not visible to the building inspector.

In the process of getting the permit, you'll be required to furnish a signoff by a registered professional engineer, demonstrating conformance to the construction codes and general due diligence.

The overall objective of this permission chain is to prevent the collapse of the structure and thereby minimize hazards to yourself and the general public.

Not the answer you're looking for? Browse other questions tagged structural-engineering civil-engineering retaining-wall or ask your own question.