How can a knife cut through butter?

How does anything actually cut anything, since we all know stuff is made up of atoms and molecules, which can't be touched together (It Requires Binding Energy). So how come we see things all around us being cut so easily?

Muze had a good answer from the Physics side. From a materials perspective, we see things have grain structure, which explains how different fractures occur. Butter cuts smoothly because its micro-structure is rather loosely held.

Butter is primarily composed of triglycerides:

These short heads (where all the Os are) bunch up, while the long tails spread out. The tails find tails from other triglycerides and weave themselves into giant knots, in the sea of other cells, water, and other compounds in the butter. This begins a process called crosslinking, which makes butter a polymer:

While the butter solidifies into its final solid shape, it's a loosely held together knot surrounding bubbles of loosely solidified organic material. The net result is an intergranular fracture as you split the various loosely bound knots apart from each other by simply pushing them away from each other. 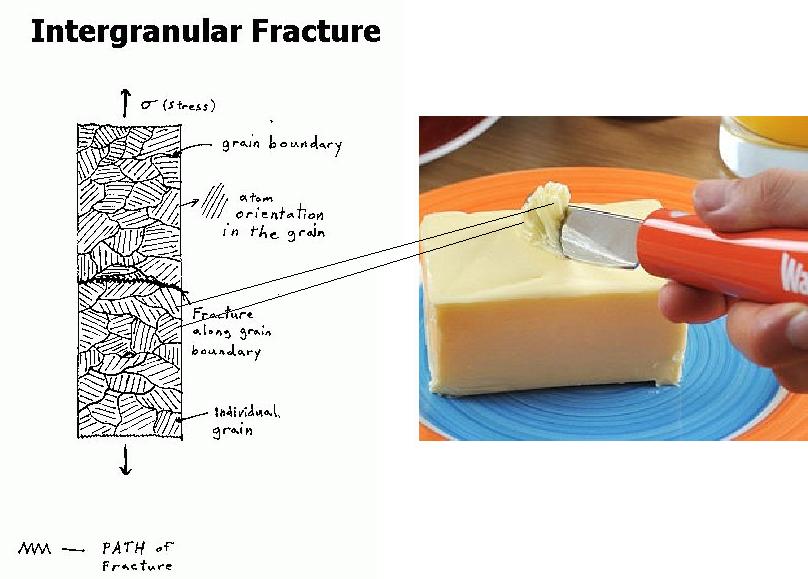 The knife breaks the bonds between the atoms and pushes the atoms to the side. Depending on the type of bond and density made when the atoms are in a solid state or moving slow atoms are harder to move with another set of atoms. it Less energy is need to move excited the atoms (like butter) creates weaker bonds to break. This is a good for Physics.SE as well.

Not the answer you're looking for? Browse other questions tagged mechanical-engineering materials cutting or ask your own question.

1
How to make screws stay tight under high vibration?
0
How is train speed calculated in OpenRails?
7
What is this pan-tilt system called?
1
Driving a lead screw using a universal joint
0
How should I lubricate my gears?
16
Why does temperature not increase by putting more logs into the fire
1
What is heat , chemical energy and thermodynamics laws restrictions