A study from Purdue University suggests the Moon contains a number of wide underground lava tubes, up to 5000 m wide and about 1500 m high, in which subterranean cities could be constructed. Such tubes would protect potential residents from cosmic radiation and from the extremes of temperature on the surface.

Prior to constructing anything in such tubes the inside of the lava tubes would need to be inspected for integrity of the rock and where localized weaknesses were found these would need to be fixed. The risk of a rock or a wedge of rock dislodging from the backs/roof/ceiling or walls of the tube and falling on people, plant, equipment or buildings would need to be to mitigated.

What would be the best way to stabilize any local weak spots in the internal surface of the lava tubes?

For example, here are some common tools and techniques for adding stability to natural and engineered structures:

The natural way to stabilize it is to pressurize it. The normal atmospheric pressure is ~ 100 kPa. To do that a gigantic air-tight liner should be inserted within the lava tube. It would be a little larger than cavern on order to transfer pressure loads to rock walls and sealing. A tricky equilibrium must be designed between gravitational induced rock pressure and internal gas pressure. It is a challenging engineering task but looks more realistic than large scale engineering works the under lunar surface.

As a benefit, this solution will provide a large habitable space.

A precedent exists in terrestrial engineering practice during the construction of subway tunnels under the river bed. 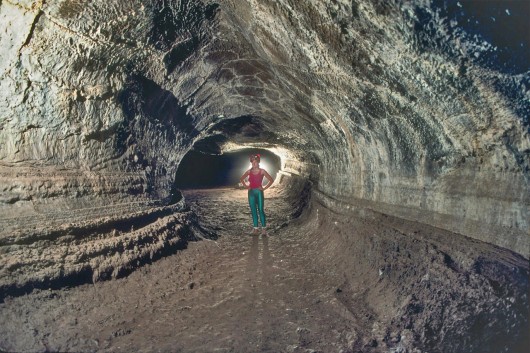 Terrestrial lava tube crossection. The flat floor of some lava tubes is usually a result of later sediments.

Not the answer you're looking for? Browse other questions tagged civil-engineering geotechnical-engineering reinforcement or ask your own question.