Mechanically, is an arc stronger than a rectangle?

I was wondering, what is the strongest : a rectangle or an arc (same width/height) ? 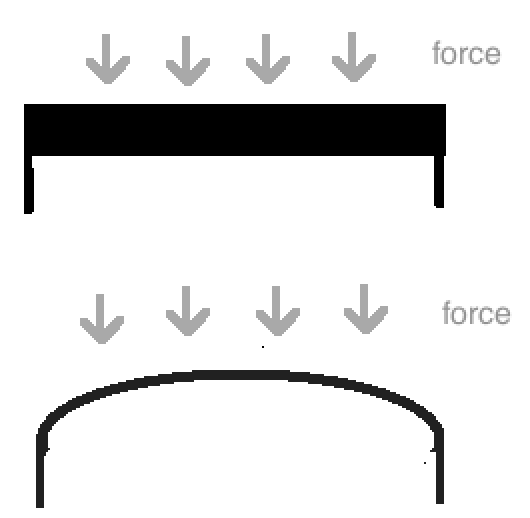 you have to imagine the screenshot in 3D : you have 4 walls and a paved layer (the rectangle) or a dome

Reason why the rectangle would be stronger : same size as the dome but more raw materials

Reason why the dome would be stronger : the vertical pressure is directed to the walls -> Keystone

I am making a plastic box and people will walk on it (box size is size of a foot). for some reasons walls must be thin and the box must be pretty thin too and we wondered what shape is stronger / is less likely to bend in its center

The answer to your question is very simple.

This is a result of the principle of superimposition. If you overlay your arch on top of your rectangle, you'll see that the rectangle, in a manner of speaking, contains the arch:

The extra material above and below the arch, given your assumptions (the most important of which, aside from using the same material and dimensions, is ignoring self weight of the material), cannot negate the load carrying capacity of the arch "inside" of it. Therefore, the rectangle will have at least as much capacity as the arch.

Your question is very broad, but at its heart is question about how various shapes transfer load.

When a solid beam is loaded, it will experience moments and shears.

The moments are primarily resisted by the material furthest away from the centroid of the section. This leaves the material at the center of the beam under-utilized. This is the reason that steel beams are commonly shaped like an "H" on its side. Solid beams are not efficient with regard to moments.

One notable example of an efficient arch is the dome of the basketball stadium at the University of Illinois. This structure is a concrete dome that is 3.5 inch thick at its thinnest. The structure has steel strands wrapped around its base that help to resist the horizontal forces. The dome is self-supporting. 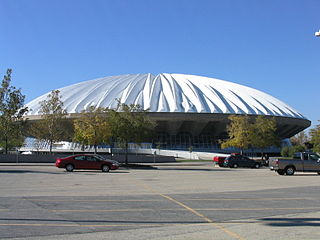 There is an interesting article on the efficiency of arches that mentions the dome above.

A inverted catenary arch will not need any tensile strength to support the force provided that it is uniform across the entire top. However all that force will be transfered to to walls and out to the side. It needs a firm anchor to avoid the outward bulge that would destroy it.

If the rectangle has a similar anchor then you can think away all the material that is not part of a catenary arch. and see above. The normal sag would then be counteracted by the force at the anchor points

7
Why are concrete bridges more prevalent than steel bridges in the United States?
2
Is a particular bund/embankment geometry more stable than others?
4
Foundation Excavation: How much larger than the RCC footing?
1
Terzaghi's Equation with more than one column
2
Which way of joining is stronger?
3
Structure other than a wall to reduce wind?
1
Electric Arc Furnace Steam Production
1
For arc-length method in nastran, how to analyse post-buckling behaviour with load decrease
0
Which is stronger, a round sign post or a square-cross-section sign post?
0
Given the same diameter and height, which is stronger? A vertical standing cylinder or a vertical standing rectangular?