What is the distance at which the triangular UDL is acting on in this problem?

I'm working on the statics problem below:

It is 2/3 and also if we assume the moment direction positive clockwise, to be consistent with the rest of your positive signs, then that vertical loading's moment is negative, the correct sign and factor is (-0.5*5*4) (2/3*5).

If the loading triangle was reversed increasing up your assumption would be correct.

As for the title of your question, any statics textbook should show you the centroid of a right triangle. This wikipedia article gives the centroids of common shapes.

When summing the moments about a point it is important to indicate your sign convention (clockwise positive or counterclockwise positive). Either convention is acceptable so long as you are consistent throughout. Looking at the work you showed, there appear to be some inconsistencies. For example P1 and M1 (see sketch below for notation) should both produce clockwise rotation about Point E, however your work shows them producing moments with opposite signs.

I won’t write out the whole equation for summing moments about Point E because I don’t want to do the homework for you. You’re on the right track though! 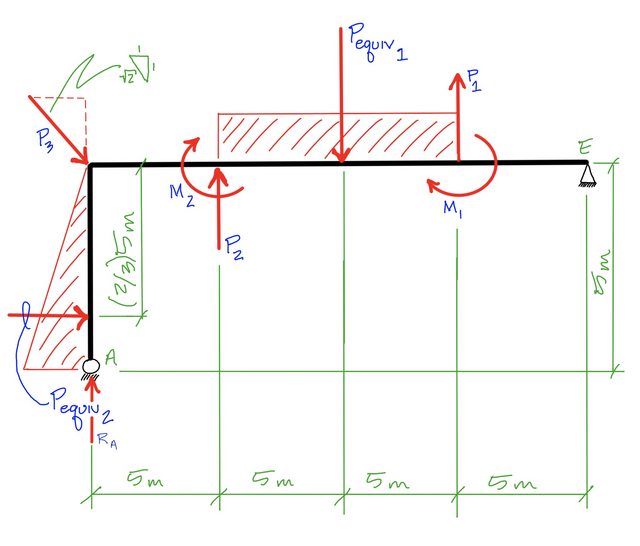