On a datasheet, sensitivity temperature drift (TCs) is specified in %/K.

I read this as "the percent change per kelvin".

Is this is simple as this sounds, or is there a reason for using kelvin over celsius?

This is as simple as it sounds - if the reading was 5mA current when the temperature was 20C, and it changed to 30C, with TCs = 0.01, then the reading could be off by as much as:

While ISO convention dictates the use of kelvin, inverse kelvin are a derived unit and there is no standard when choosing between inverse degrees Celsius and inverse kelvin - except to avoid having to place a unicode degree symbol (kelvin are standalone without the symbol). Another reason for the notation discrepancy is that some measurement devices, such as thermocouples: 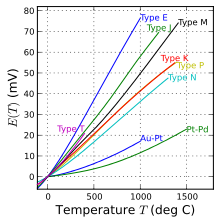 have a semi-non-linear response with respect to temperature. As such, these typically will denote their average change over a large range as per degree Celsius, to hint that it is more of an "average" amount and that more precise thermal drift values can be obtained by reviewing the exact temperature range that is being measured.

Yes, this is the percentage change per kelvin.

Most engineers work in kelvin as some formulae need the absolute temperature such as when calculating the total internal energy, but we sometimes don’t bother such as when dealing with temperature difference, but it was good practice when we were taught it so we continue to use K...

Not the answer you're looking for? Browse other questions tagged electrical-engineering temperature nomenclature or ask your own question.

10
What does "$\pm$ 0.5% F.S." mean?
8
What does a Sad Face on a circuit board mean?
2
What is this nut on a micrometer head and what is the tool for removing it called?
2
What is the Technical Term for this kind of slot?
1
What does "redundancy" mean?
1
What is the engineering standard for filenames with fractions and inches?
1
What does it mean by average kinetic energy of molecules as temperature?
1
What does "rigid steel" mean in electrical construction plans and specs
1
If a control system is unstable does it mean it will oscillate?
0
Mollier diagram and reading the relative humidity when knowing the dry- and wet bulb temperatures