Stationary gas engines in combined heat and power plants are usually run at a very high air-fuel-ratio in order maximize efficiency and reduce NOx-emission at the same time. With the introduction of more air, thermal efficiency is increased due to a higher heat capacity ratio of the gas mixture. At the same time this also results in reduced temperatures in the combustion chamber which reduceds the oxidation of nitrogen and therefore lowers nitrogenoxide emissions.

However, in literature a tradeoff between low NOx-emissions and a high engine efficiency is often mentioned.

Also, I assumed that higher temperatures in a combustion chamber were indicative of an efficient combustion, which is also not in accordance with the first paragraph.

Other papers that I have read also indicate a maximum of brake thermal efficiency at the same air-fuel-ratio as the maximum NOx-emissions, which is also not in accordance with the first paragraph.

Does anyone here have a good understanding of lean burn engine mechanisms and can help me understand this? I can also provide more details regarding my own misunderstandings.

Once again, thank you for your answer, Mark. Here are some further thoughts including the graphs that confused me initially. Most notably the graph "otto cycle efficiency vs. compression ratio".

Regarding the beforementioned graph: With the increase of lambda, the isentropic exponent gamma is also increased, resulting in a higher thermal efficiency. Does this increase in efficiency also imply an increase of the available power at the crank shaft? My assumption is that the increase in efficiency also increases the available work in the p-V-diagramm of an Otto cycle (area between the 4 points of the different steps of an otto cycle). One thought experiment would be increasing lambda to infinity, therefore maximizing thermal efficiency as the isentropic exponent approaches that of air. However, this does not make much sense now as there will not be any power at the crank shaft. Or to put this whole paragraph briefly: What do I gain by an increase in thermal efficiency? Where does the statement "lean burn engines are efficient and reduce NOx-emission" originate from, when the minimum of the brake specific fuel consumption is at the same lambda as maximum NOx-emissions?

The argument of the efficiency of a lean burn engine is often used in literature, however the lowest brake specific fuel consumption occurs at a lambda only slightly higher than the stochiometric operation of the engine and quickly rises then. This is very confusing as the previos investigation of gamma would lead to the assumption that I can simply "increase lambda to get more efficiency". What is the motivation behind an increase in thermal efficiency when it cannot be used as mechanical power at the crank shaft?

Please excuse that my questions seem a little naive.

And one last very important question: When investigating lambda, is it correct that with an increase of lambda the mass of the actual fuel is reduced? Or is the mass of fuel usually held constant in such experiments and lambda is increased by adding more oxygen, effectively increasing the total mass of gas in the combustion chamber? (To make a long question short: Is the convention that total mass in the combustion chamber is held constant when varying lambda or is the fuel mass held constant and lambda is varied by adding more oxygen) 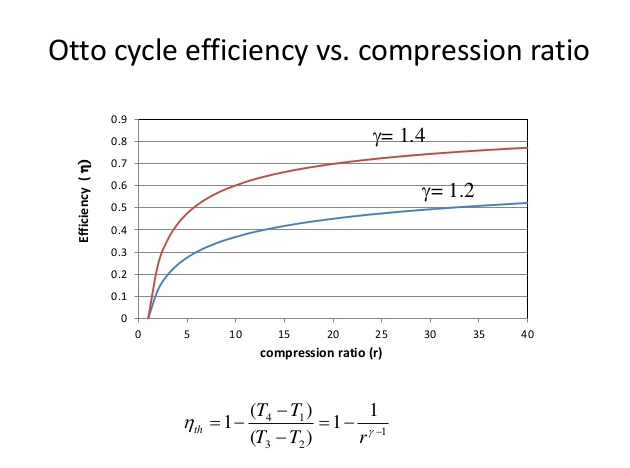 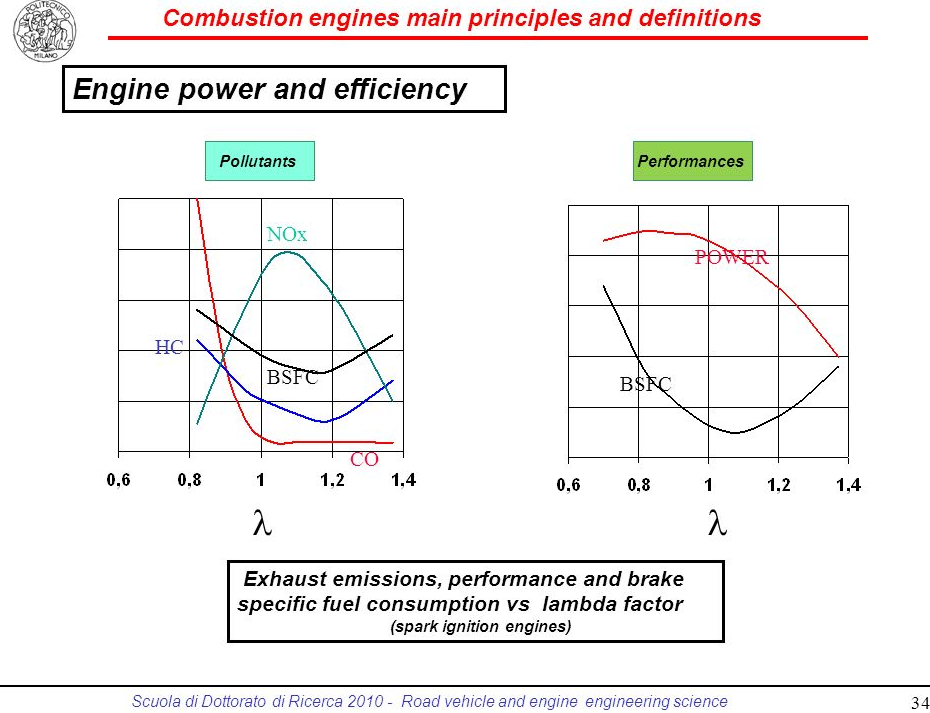 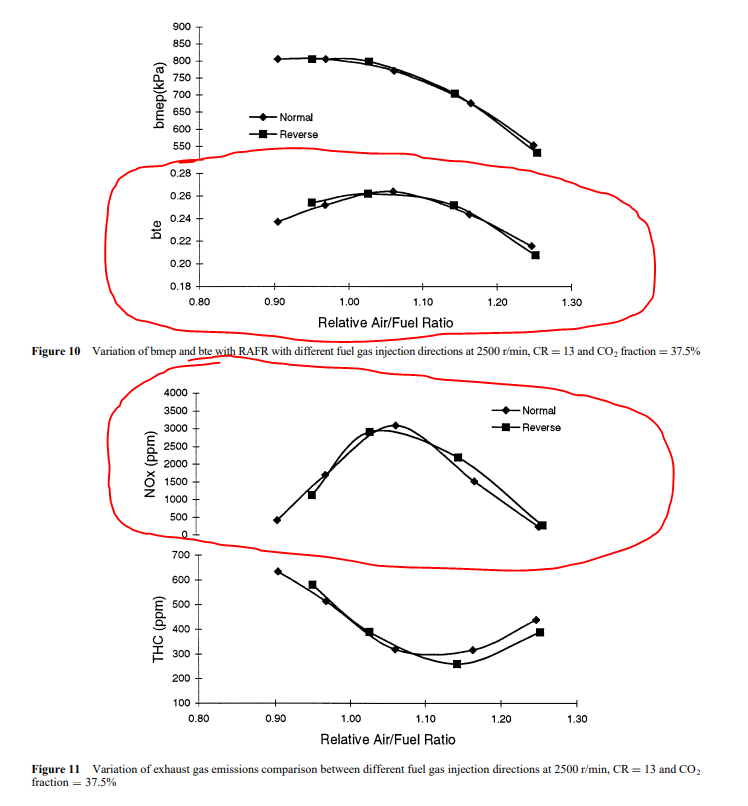 automotive-engineering energy-efficiency biogas
Share
Improve this question
edited May 16 '18 at 18:12
derhendrik
asked May 15 '18 at 19:21

This is a good, complex question, and the short answer is that it has entirely to do with terminology confusion. To answer it, I have to explain the physics behind the equations, because a lot of single experiments are going into each of these terms, but the net result of the entire system fosters other terminology.

To start with the heat of combustion is determined in a laboratory where they have a fixed quantity of fuel in a closed chamber that is insulated so heat cannot escape. In this case, we obtain that the reaction would release some amount of heat (in a unit called Joules, which is the amount of energy in 1 second of a 1 Watt power source) for every amount of fuel. Typically this is done on a mass basis (J/kg), but other versions, such as a volume or per-molecule basis (J/L or J/mol) are used. The heat released (in Joules), is a measure of energy. To determine how much energy was released, we actually need to do some backwards calculations. In an ideal world, where the experiment has the stoichiometric (chemically exact amount needed for the reaction - no more, no less) amount of pure oxygen and fuel mixed together, we would run the calculations as follows:

Together, we see a temperature rise, and using properties taken in an earlier experiment (how the temperature of some substances changes when a specific amount of electrical heat was applied), we can find the amount of energy generated during the reaction. Note that your assumption in this experiment is completely accurate - a high temperature rise would indicate the reaction went to completion. If it was low temperature, we would unfortunately see a lot of side reactions which resulted in poor combustion (such as NOx formation). We would call the highest temperature rise possible a value of 1, and anything that got to 90% of this value would be considered 90% efficient. This is a form of thermal efficiency known as fuel efficiency

Another way the temperature in this thought experiment would be lowered is if it was full of an inert gas, such as Helium, that did not participate in the reaction. The limited amount of fuel in the chamber would raise the temperature of the fuel and oxygen, but it would need to also heat up the helium. Such a temperature rise would use some of the available energy. These are both ways we can have low temperature - through poor combustion, and through dilution. One still has a high thermal efficiency, the other is simply a lower temperature.

A final thought experiment, if we had an ideal engine in-taking air from a hot oven, it would be a lot less efficient. The engine would need to be cooled a lot more, and it would have to run very slow. This is partly due to the components over-heating, and partly due to the fuel knocking, but mostly due to the fact that it would be a lot more work to compress that hot air then it would be to compress colder air. As a result, the engine is a lot less efficient. In the early 1820s, it was proven that the most energy you could get using heat was a thermodynamic cycle called the Carnot cycle was the most efficient, and the efficiency depended entirely on how hot you could get the gas, and on how cold the gas started. This Carnot Efficiency, between the two temperatures, could be called 1, and anything that is 90% of this power extraction would be a form of thermal efficiency we could call a brake thermal efficiency, because by physics no engine can be more efficient than that value. It is called a brake efficiency or brake power because you measure the power that you are using at the brake to stop the engine, not the power (in terms of chemical energy flowing through the engine per second).

Not the answer you're looking for? Browse other questions tagged automotive-engineering energy-efficiency biogas or ask your own question.

3
Do magnetic fields applied to a fuel line have an effect on heat output?
0
What affects an internal-combustion engine's efficiency?
1
Diesel or Gasoline? Which one is more dangerous to our health?
0
Thermal efficiency affected by hertz (Gas turbine)
2
How do hybrid cars achieve greater fuel efficiency?
2
Why not drive an air source heat pump domestic heating system with an auto engine?
3
Why do 2-stroke engines burn more oil?
2
Does rev hang in automobile engine depend on the engine load? What are the factors that affect rev hang in automobiles?
2
How turbo engines increase efficiency if have lower compression ratio than naturally aspirated engines?