Term for double slope from street

One of the places I frequent recently had the curb and sidewalk rebuilt by the city. Previously, there was a roughly continuous transition from the street to the rest of the private drive next to the building.

After the rebuild, the sidewalk was leveled out which created two sloped areas coming from the street. The problem with this new design is that even at reasonable speeds, vehicles are somewhat bottomed out from the up-down-up motion created by the two slopes.

If it matters, this is a transition point from a public street and sidewalk onto private property for a non-residential building. 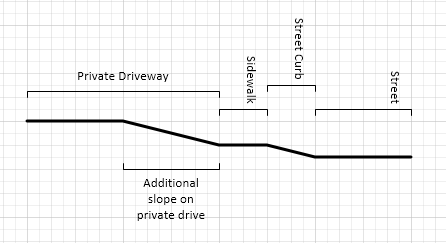 Please note, I have exaggerated the slopes in the illustrations in order to clarify what I'm asking about.

Is there a common term used in roadway design that describes the double slope? I would like to be able to research the term to see if there was any code violation. At a minimum, I'd like to use the correct terminology when I ask the city about rectifying the problem.

I'm not sure that it has a specific name. It is just, "the way driveways are when there is a sidewalk."

Like most things related to roadway design in the US:

The report linked above studied driveway geometry requirements from around the US and tried to do some modeling as well. The graphical results are shown below:

The conclusion that I got from skimming through the report was that lots of driveways have bad geometry; drive slow.

Unless there is a local code that the drive is in violation of, it might not be something that the city is willing to fix.

I'd be surprised if there's a common term for the double slope. Based on some internet searching for terms used in the US, the slope is called a grade, but I've not found anything particular to your situation.

I'd suggest possible wording for your discussion with the city would be "the multiple changes in grade tend to result in the underside of vehicles scraping on the driveway".

2
What is the Technical Term for this kind of slot?
2
Looking for a common term for "non-circular pipe"
1
Is "critical pipe" a proper term for a pipe used in a critically important role?
0
What's the term used for machine parts orientation naming on the sagittal plane and from inside the machine?
0
Fluid-dynamics question: proper term
2
Save loose soil from erosion on a slope
3
Street Light Arrangement Method
0
Correct term for "Cabin Window"?