Are jeweled bearings commonly used for applications other than mechanical timepieces?

Jeweled bearings use a metal spindle with a jewel lined pivot hole (pictured below). They have been important in the manufacture of mechanical timepieces since the early 1700's. Their importance lies in the fact that they can be machined to very high accuracy, they have low and predictable friction, and their hardness gives them very low wear. They are known for operating in sealed environments for decades with no servicing. 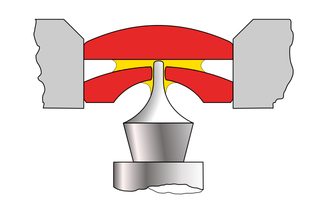 Typically jewel bearings (as you've described) are not used in large scale industrial equipment. The main reason jewel bearings are used is their inherent hardness. The bearing material has very little wear over the life of the bearing. Most of the wear occurs to the shaft riding in the bearing.

Other applications of jewel bearings, aside from watch movements, include gyroscopes, turbine flow meters, and other assemblies which are typically subjected to small loads and do not generate large amounts of heat which require might forced lubrication to remove the heat.

"The business part of a compass is out of sight. This is a set of tiny magnets glued under the compass card and surrounding the jeweled pivot that supports the center of the card." -The Annapolis Book of Seamanship, by John Rousmaniere

Not the answer you're looking for? Browse other questions tagged mechanical-engineering friction bearings or ask your own question.

4
Are Rolling-Element Bearings Practical for Light Loads?
3
Use of sleeve bearings for linear motion
0
Bearings for a contra rotating tubes
3
What are 1 ball and 2 ball bearings?
4
Radial vs thrust bearings for assembling a lift mechanism
1
Do really "all mechanical watches need to be maintained properly"?
0
Could radial bearings with brackets hold the weight and load of a large cart