Consider a spring like this (this one CoC hand gripper): 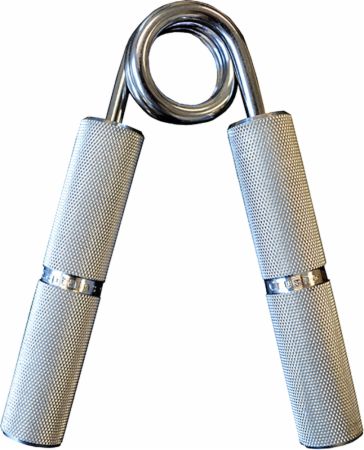 They claim on their web site, that the spring will not degrade during time:

Do your grippers get weaker with time? No, so don’t worry if your Captains of Crush No. 1 gripper is feeling easier to you now—it’s because you’re getting stronger! What is mistakenly called “seasoning” by some people is actually a weakening with use, and it’s a reflection of an under-designed gripper with a spring that is bending, which is why it’s not uncommon for low-quality grippers to get narrower and easier as they are used. On the other hand, Captains of Crush grippers hold their line for a lifetime of steady training.

There is also a lot of discussion on this topic, referencing some re-measurements, but none of that seems really trustable.

My questions, from engineering point of view:

I can imagine that both options (degradable and also stable springs) are possible. But how probable it is. Note that such a product cost usally $10-25.

I know this is kind of opinion based question, however the experiment would take few years, so any theory and/or experience based answer can help.

for a properly-designed (right materials, right size, right manufacture) spring of that type, the applied stresses are far too small to cause any plastic deformation (permanent bending) at all. Furthermore, there is no physical mechanism active at room temperature and low applied stress in spring alloys that causes them to "season" or take a set on initial flexure.

The temperature at which an otherwise properly-designed spring would lose strength and take a set upon flexure is so high that you'd get 3rd degree burns of your hand while using it, so don't fall for the false claim that storing one of these in a hot place will ruin the spring.

A low-quality spring could become softer with use by the progressive growth of fatigue cracks in its surface but for a hand exerciser this is very unlikely because those cracks require a very large number of stress cycles to grow to significant size.

Spring alloy design and spring manufacture are both quite mature technologies and the materials used in them are not a significant cost-driver in a business model; the most probable way that a "low quality" spring would fail is due to a flaw hidden inside the spring (like a slag or scale inclusion) - but these would cause prompt and catastrophic failure of the spring within tens or hundreds of flexure cycles out-of-the-box.

We can and do routinely produce high quality standard coil springs on the industrial scale, and are used to produce custom springs in the same quality. And we are not talking about outliers like defective individual springs or spring batches.

The idea itself that a contemporary industrial spring could be regularly defective, or in some other way not just a working spring, is irritating to me.

Item 2. is clear cut, but in 1., you ask whether it is even possible an insignificant change exists that could be significant in the product of the competitor. I do not think there is a weak version of spring degradation, but there is something related that is interesting: A part made of soft, annealed steel that is subject to deformation similar to a spring, would become harder from the deformation. Work hardening results in much harder steel, but hard and brittle, not hard and elastic. It's almost like a bad spring would fix itself.

So from the engineering perspective: No, they do not degrade, confidently without even checking.

But there is an interesting aspect to it that can suggest it is not just fraud against a competitor.

It is a psychological effect unrelated to the material of the springs.

It is the placebo effect.

The interesting part is that the placebo effect is something much more powerful beyond what is common knowledge. It has nothing to do specifically with replacing prescription drugs by inert substances. That is only one of the ways how to make something happen only because the patient thinks some external cause exists, like a medication.

People have a, roughly speaking, so personal and intense relationship with this particular use of a standard coil spring that an attribution that is not obviously wrong can be stable in a subculture tradition.

The placebo effect can easily work to change how strong a spring seems to be. And in a way, the spring becomes legitimately weaker for the person, he does perceive it.

Springs do degrade in length and load. How much and how fast depends on various factors. One very obvious factor is the design, which causes for the same displacement at the grip a different strain in the material. The higher the strain, the higher the wear.

Imagine the spring wire a bending beam. You can generate the same second moment of inertia (which is one factor of generating spring stiffness) with a flat and wide cross section and a high and narrow one. The last one however will generate more strain in the material. Or, compare a two thinner wires with one thicker one. Or if you have a thicker, but longer wire (more coils).

That said, I also do not think, that any quality manufacturer would deliver a design, that shows an effect of degradation. But I woulnd't be surprised if you find them. For anything that people have manufactured, you can find examples of ultra low quality. Besides design, also material can be just too crappy. Just, using this to sell something may only show how much this manufacturer just escaped this ultra low quality business.

Not the answer you're looking for? Browse other questions tagged steel springs or ask your own question.

0
Wave torsion spring?
0
What affects the spring constant or spring life spans?
2
Spring-like device with anisotropic k value
1
Is the Spring Rate for a Belleville Spring Linear?
8
Can I weaken a coil spring consisting of spring steel?
1
Overextending and cutting a coil spring
3
Common spring materials