Looking for advice on design of some rollers

I’ve some small U groove rollers I’m having made, 60mm diameter, 60mm wide, 28mm diameter at ceter of U profile. 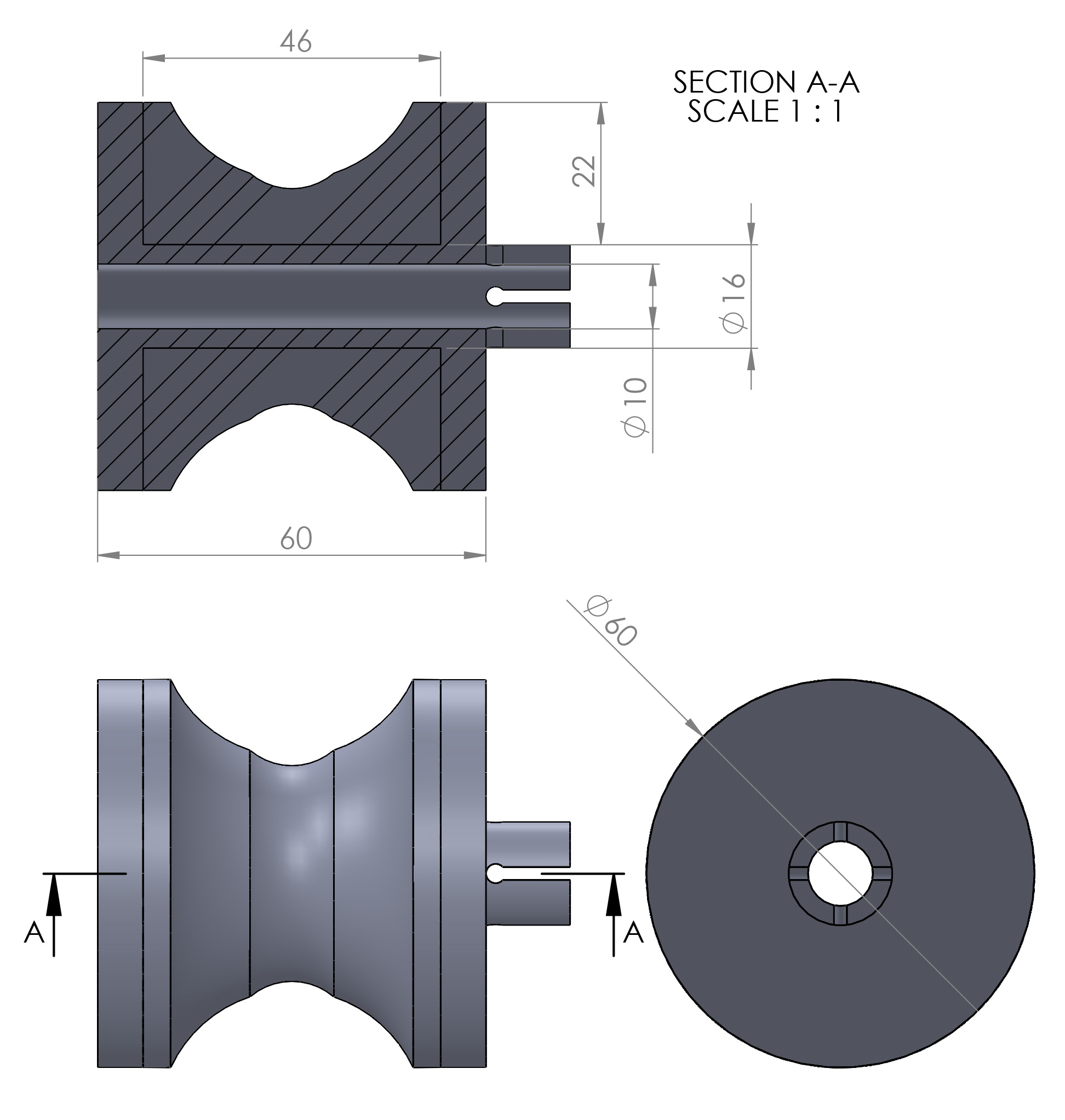 The rollers need to be silent and have some friction on the rails. Polyurethane seems the most suitable material as it’s the highest load capacity to friction I can find but I’m open to suggestion if anyone can think of something else? I want to maximise how much weight they can take.

I can not harden the polyurethane much as they need to be soft for the friction and to run silent. Also I can’t thicken the diameter of the rollers though I can make the hub smaller to thicken the PU a little.

How do polyurethane wheels fail under pressure? I’m presuming that the PU is displaced and shears of the bonded surface eventually splitting in the centre as in drawing A.

First I though of putting support on ether side as in picture B.

Then I changed the profile of the U groove to have a dip in the centre. The groove should redistribute the pressure away from the centre and into the sides, acting against the side support and on the thickest part of the PU. 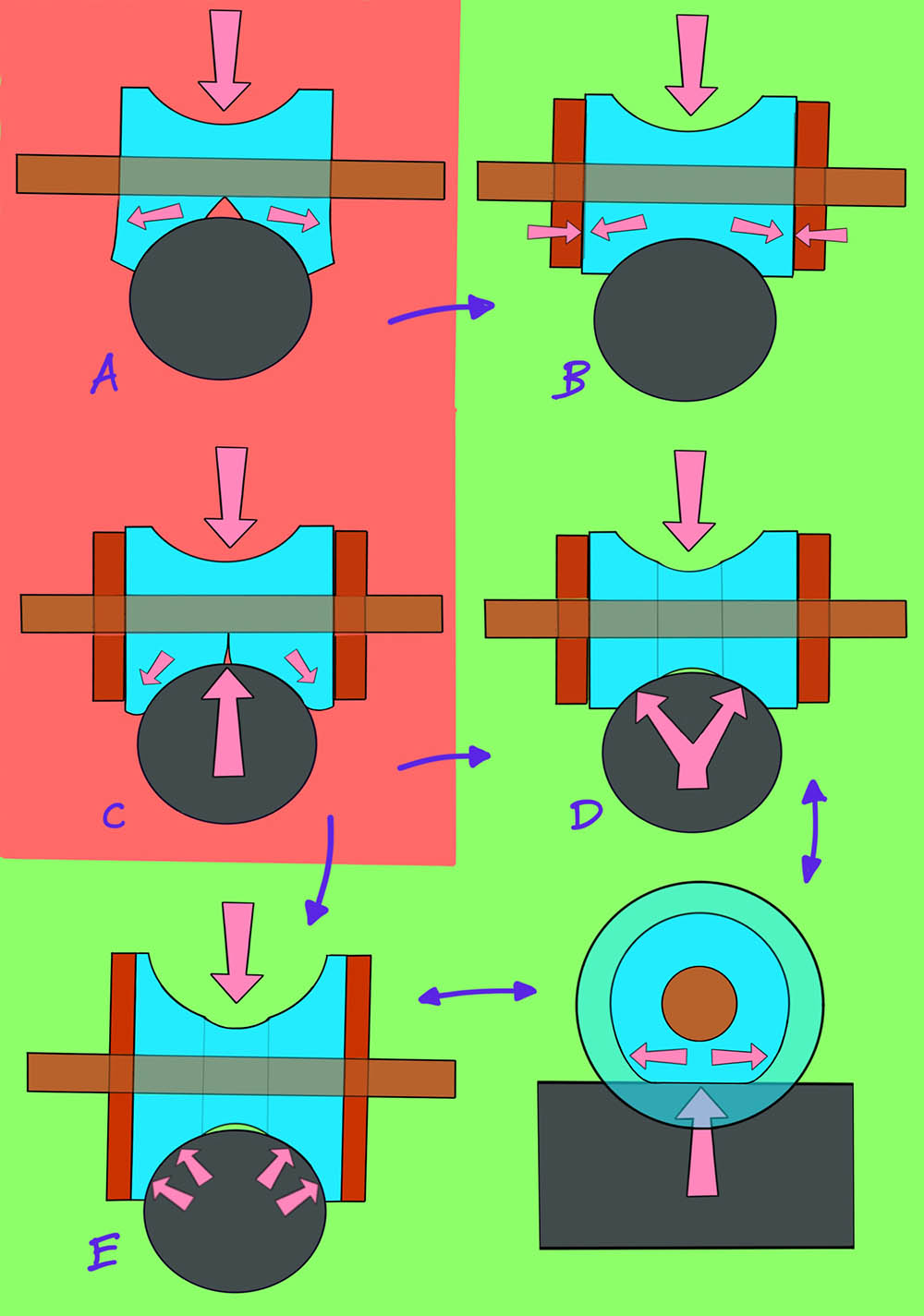 I was also looking a whether different shaped larger hubs and thinner PU or smaller hubs and thicker PU would be better under strain?

Finally I was looking at the possibility of support within the PU to increase it’s load capacity and make it less likely to deform, something like a 3D printed Nylon mesh reinforcement. I’m going to talk to the company who makes the wheels tomorrow but I suspect that making a PU mould with a mesh inside will have problems with getting rid of bubbles and cavities.

Is there is anyone out there with any experience or opinion on how PU behaves under stress, any advise how these wheels fail? Are there any other methods of increasing the load capacity of PU that you may know of? Or is there another material that may be more suitable?

Thanks for taking the time Chris, I can’t see a button to answer you apart from the commet one which has a limit to the letters? So I did it here.

The weight capacity is ok but it’s right there on the edge of ok. Unfortunately I can’t add rollers or increase the outside turning diameter.

I need no slippage, so I need some friction and I need a little give so as not to translate tiny imperfections up the shaft and into the mechanism. 85A hardness PU would do the job, maybe 90A, I don’t know, I’m waiting on harder samples to try them out.

The issue of the wedging effect you brought up is something that has been on my mind, I’ll have a look at the conical idea though I’m hoping that by having the PU bonded to the two side supports will go a long way towards mitigating any wedging effect.

PU can move and flex but can it be compressed? I’m unsure but I suspect that it can not or of it can its only by a tiny amount. So the failure point of the roller is down to the displacement only.

By bonding the PU to the hub and also the two side supports I hoped to have the weight acting on the PU where it has the two bonded surfaces to reduce the displacement that can happen.

My natural reaction has been to increase the thickness of the PU to increase it’s load capacity but the more PU there is and the further it is from the bonded surface surely that means the more it can be displaced?

With this in mind I was thinking that it may be better to make the hub the same shape as the roller and have only a thin layer of PU as in the 3rd drawing down. This would increases the diameter of the hub from 16mm to 25mm at the thinnest point. Do you think the thick hub with the thin layer of PU would be better or the thinner hub with as much PU as possible?

Is there another materiality that would be more suitable? I was trying to think of something like layers of leather or rubber or PU coated fabric or something like this but couldn't think of anything.

In of the first issues you will get is that the area in contact with the rail will flatten, increasing the rolling resistance. In practice this is what tends to limit that capacity and they will become unusable deformed before they actually fail as such. So its really the Youngs Modulus rather than the tensile strength which is the issue.

The most obvious way to improve the capacity is to increase the diameter. If you look at industrial castors the main difference between different capacities is the wheel diameter.

If that isn't possible then the next solution is just to use more rollers.

There is also an issue that concave rollers on rails don't actually work that well, especially under moderate load as the shoulders tend to rub on the rails and wedge you are probably much better off with a conic section like train wheels or using a set of guide wheels like a roller-coaster.

2
Force required to move object on wheels
6
Need some advice, control system animation. Appreciate some help!
2
How to keep lighting "barn doors" open
2
Reduction System for Gate-opener motor
2
How do I determine what hardness to change the bearing or the track?
0
Failure of wire flattening pinch rollers