If I remember two things from high school physics, it’s:

Both a fuel-only car and a hybrid derive all their locomotive energy from the fuel (ok, and gravity, if you’re going downhill, but let’s ignore that). But the hybrid involves an extra conversion to/from stored energy on the way, i.e. charging and discharging the battery, which according to the second principle above should make it less efficient.

Furthermore, the battery entails additional mass, which, if it were dead weight, would reduce the power/weight ratio of the car, reducing efficiency.

So to achieve greater efficiency, the hybrid engine must somehow make use of energy that would ordinarily be lost in the engine of the fuel-only car. In order for the hybrid to be more fuel efficient than the fuel-only engine, it needs to do this in a way that overcomes the above inefficiencies and then some.

So my question is, what broad physical/mechanical techniques does a hybrid engine use to achieve this, and (in rough numbers) how much of the efficiency gains come from the different techniques?

I know there’s regenerative braking, but how efficient is this in practice? I.e. how much of a car’s kinetic energy that would otherwise be lost through braking is actually captured and re-used as locomotive energy? And is this basically it, or are there other techniques that significantly contribute to the efficiency of a hybrid?

The difference is the regenerative braking. It take as much work to decelerate a car as to accelerate. I don't know the actual efficiency but even 50% recovers a lot of the energy that would have been lost as brake heat and brake dust.

The electric assist control is also tuned to let the gasoline engine operate in a range where it is most efficient.

According to this link the DOE puts efficiency at 60%.

Paparazzo pretty much nailed it, but I'd like to add a few things.

Regenerative braking is certainly a large part of it, but there are other synergies when utilizing multiple engines in an automobile, too.

In addition to this list from geotab, here are a few more insights to energy balance around an automobile:

Other considerations: I don't have any data for this and at the moment do not have time to research it, but I think that there could easily be a human factor to consider as well. I've driven with many individuals, and I don't think that any one will argue that different people have different driving styles. Considering that some people accelerate slowly, while other accelerate hard and brake hard. Considering the synergies of the hybrid electric-ICE power train, it's possible that the hybrid power train can more robustly serve the two different drivers under equally efficient conditions. Consider that the aggressive driver would lose substantial energy in the braking system - and to get the acceleration they desire would require a larger ICE (think big V8s). they would spend more time NOT under peak load, which is what an ICE needs to be efficient. The hybrid drive train would deliver their desired acceleration, while maximizing thermal efficiency AND recouping the energy spent at the above quoted 60% efficiency. 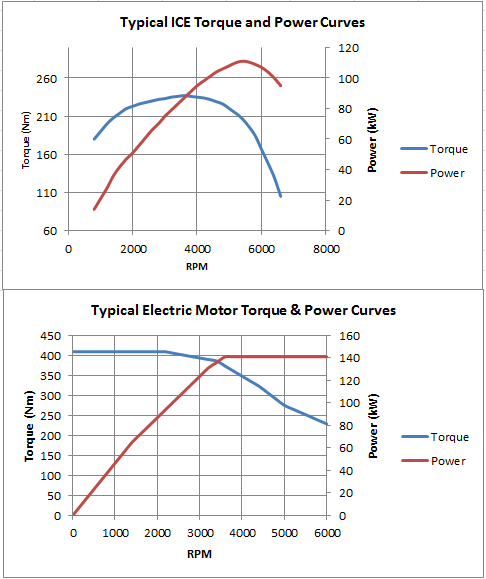 Then imagine that slow driving individual gets in the same vehicle; they would likewise be penalized for their slow driving in a large ICE. Considering the hybrid drivetrain, this individual would no longer be penalized for their tame driving habits. In essence, the hybrid drive train could better service larger extremes in driving style, and is over all more robust in terms of energy efficiency.

Not the answer you're looking for? Browse other questions tagged automotive-engineering car or ask your own question.

0
What affects an internal-combustion engine's efficiency?
6
How to determine how much energy recovered from regenerative braking
0
What is a good non-combustible oil to be used in air compression regenerative braking/energy storage system for cars, buses, and trucks?
1
Why can't energy be entirely recovered from a moving car's rotating wheels?
5
Is it true that four-wheel drive is less efficient and if so, why?
1
How can batteries in electric/hybrid cars charge at such a high rate?
1
Car MPG during lean economic times
0
Why coasting is not used to save fuel?
0
Why does my engine accelerate so slowly in rev at neutral?
0
How does Kia charge the high-voltage battery in EV mode?