I already know that a siphon is needed to start the flow from the elevated supply tank, but I do not know how to push the air out of the lower reservoir, send water into it, and then retain the water without admitting air through the water fill tube or air communication tubes. 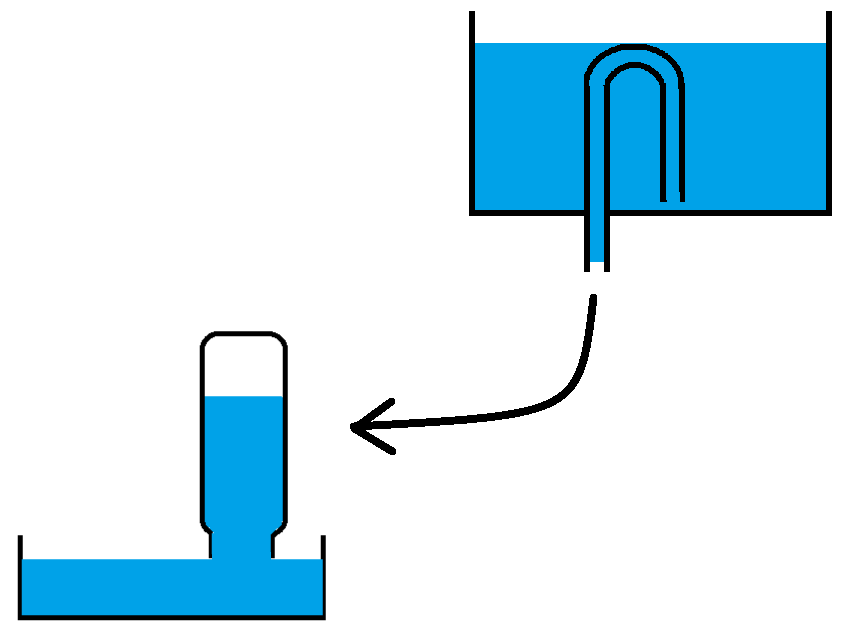 Also, where would be a place to look for possible solutions to these questions? I have researched the technology of intermittent dosing siphons for sewer flush systems from the 1880's before electricity was widespread, and I know that air communication tubes can be extremely complex and dynamic in operation, but there is apparently no formal way to describe it.

As stated in the comments, based on your pictures, you don't need a siphon to start that flow.

Your influent line should have a cutoff valve to stop flow and the lower tank will also need an air bleed off valve so that the air can exit the tank as it's filling, but also so that you can introduce air back into the system when emptying the tank. If you don't permit air to exit and enter the system will stall either due to a vacuum or excessive air pressure. Vacuums and excessive air pressure are bad for the longevity of tanks not designed specifically for them.

Controls for the air bleed off valve can be tied to floats in the tank. As water enters the tank from the upper reservoir, the float will rise and eventually close the air release valve; once this closes, water from the upper reservoir will stop flowing down because the air pressure won't permit it to continue into the tank. At that point, manual valves can be utilized to close the influent line. With the influent line closed, you can manually open the air release valve which will permit air back into the tank and then permit the lower tank to drain. When it's time to refill the tank, simply open the valve on the influent line and let the tank fill until the float closes the air valve again.

Here's a solution that would work once (I think). But the upper tank must be sealed and everything filled just so. Maybe someone else can take it further. 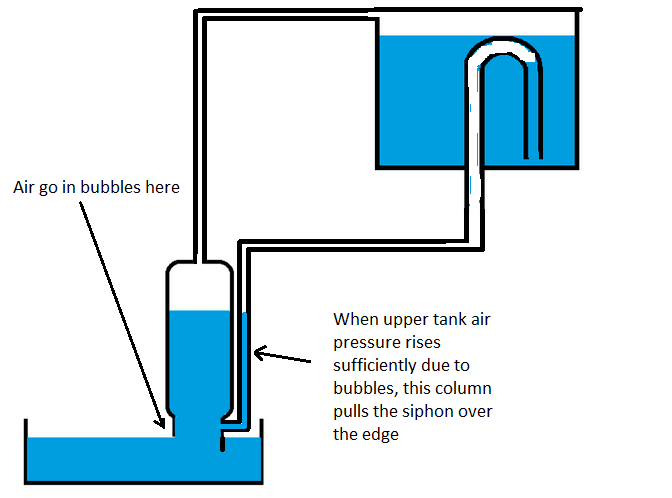 5
What will happen if I run a submersible pump without water?
0
Rate of flow of liquid nitrogen from a static tank through an orifice in a submerged vessel
1
How to measure the air pressure of a pipe without having water resistant sensor
0
How to drain large tank using pump without starving pump?
1
How to calculate the volume of water flowing out of a tank?
1
How can I calculate the buoyant force on an object without knowing in advance the amount of water displaced?
1
A sphere of radius R, made from material of specific gravity, SG is submerged in a tank of water
1
Separate air from water for water pump in aquarium
0
At what negative pressure do gases separate from water?