Determining when bolt will bend

I'm attaching a metal pipe to a metal tube as shown in the below diagram. The bolt is threaded through one wall of the pipe and does not pass through the opposite wall of the pipe, but is tightened to the point of bottoming out against it. The bolt passes through unthreaded holes in the tube. It needs to support a load in the direction of the red arrow. I need a bit of a gap between the pipe and tube, so I'll be relying on the ability of the bolt to resist bending under this force. Assuming that nothing else will give out first, what metric would I use to estimate how much weight it can support before flexing the bolts? Is it "bending stiffness" rather than "shear strength"? Bolts don't typically advertise bending stiffness, so how would I estimate that? I know distance between tube and pipe is a factor because it increases the leverage the force has to bend the bolt. 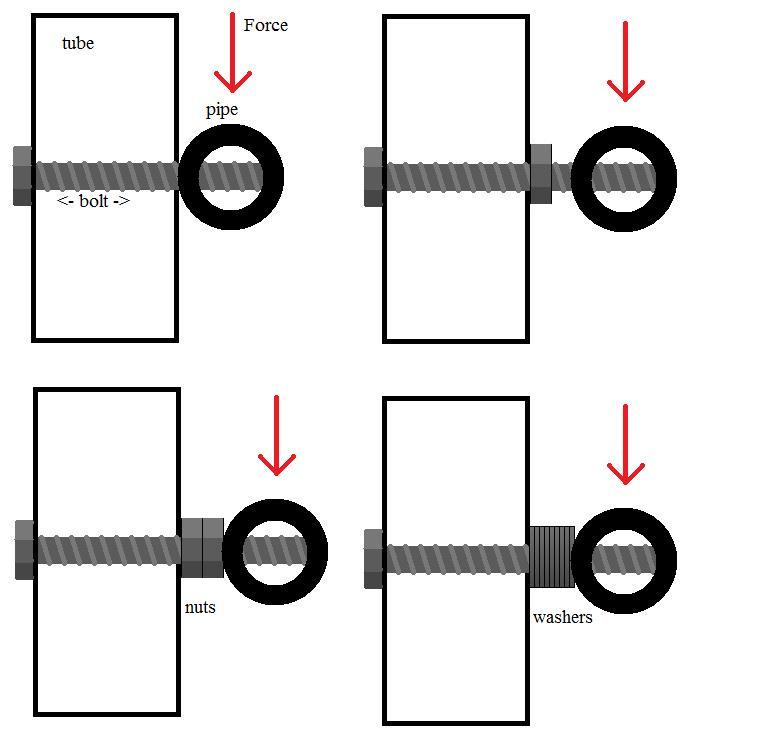 I'd think that filling the void between tube and pipe with nuts/washers would strengthen this arrangement when two flat surfaces are being attached, but since the pipe is round, is there any point? I don't expect a precise answer I just need a way to get a ballpark estimate without bending the bolts before selecting them. Hardware stores don't care for that.

It's for an improvised rail if anyone's wondering. I need upwards of 80% of the circumference of the pipe for the slider to grip it, which is why I'm attaching it in such a dumb way.

Something like this (not my image) will be rolling along it. 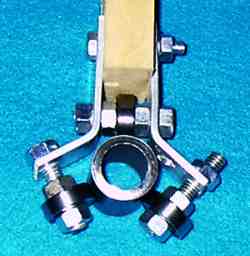 I haven't found a way to manufacture a proper cradle for the pipe. (EDIT, a U channel would probably work if I can find one the right size) I know that it would be much stronger if done vertically, but this has some advantages given my situation.

Assuming that nothing else will give out first, what metric would I use to estimate how much weight it can support before flexing the bolts? Is it "bending stiffness" rather than "shear strength"?

The metric that you should be interested in is "bending stiffness" instead of "shear strength". Shear strength has to do with opposing forces that are very close to each other. This is the principle that scissors work on. Instead of cutting the paper like a knife the two blades cause the material to exceed its shear strength and you get a nice clean cut.

If you are worried about the bolts bending then you should consider the area of elastic bodies that deals with deflection in beams. In your particular case you have a cantilever beams with a single force acting on it. This is similar to "bending stiffness".

Bolts don't typically advertise bending stiffness, so how would I estimate that?

You can estimate the deflection of a cantilever beam with a single point load with this equation.

$\sigma = $ deflection at the end of the beam

$E = $ the modulous of elasticity

See this link for more info.

This will let you determine how much you bolt or "beam" will deflect for a certain force applied. However I would guess that in you situation you do not have easy access to accurate figures for the modulus of elasticity or the moment of inertia for your bolts.

I'd think that filling the void between tube and pipe with nuts/washers would strengthen this arrangement when two flat surfaces are being attached, but since the pipe is round, is there any point? I don't expect a precise answer I just need a way to get a ballpark estimate without bending the bolts before selecting them.

There are two ways of reducing the the deflection at the end of your bolt while holding the force and geometry the same. By looking at the above equation we see that we can only change $E$ and $I$. In fact one of your suggestions falls under the moment of inertia category. By installing a larger bolt or adding nuts to a smaller bolt you are increasing the moment of inertia which causes the deflection to grow smaller. You worry that this won't do anything because the pipe is round but it will cause a part of the bolt to flex less which means less deflection at the roller.

The second option you have is to use materials with a high modulus of elasticity. By using a bolt made out of a stiffer material the roller will deflect less. By maximizing these two values you can significantly strengthen the bolts in this system.

Now for a quick note of warning. Per your request of "Assuming that nothing else will give out first" this answer does not take into account many other variables that could lead to structural failure. For example, stiffer bolts are more prone to sudden failure and by adding nuts you can possibly add higher stress to the area in between the nuts and the pipe. Please use common sense when you finalize your design and test it beyond what it would normally handle to ensure it is safe to use.

If you picture your washers as a solid mass and remove from the resulting cylinder a shape to match the tubing to which it is going to be joined, you will have what is called a pipe saddle or tubing saddle. In the world of hang gliding of many years gone by, these saddles were placed between two segments of tubing, with a bolt holding the assembly together.

One saddle would mate to the tubing in your image, the other would mate to the pipe and the contacting surfaces of the saddles, being flat, transfer the forces more uniformly to the two/four pieces via the bolt.

I did a quick Google search for tubing saddle as searching for pipe saddles was non-productive. 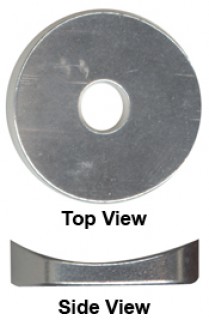 It's not too surprising that a product from Aircraft Spruce and Specialty would be priced at US$4.20, but it is aluminum, rather than hang glider plastic. 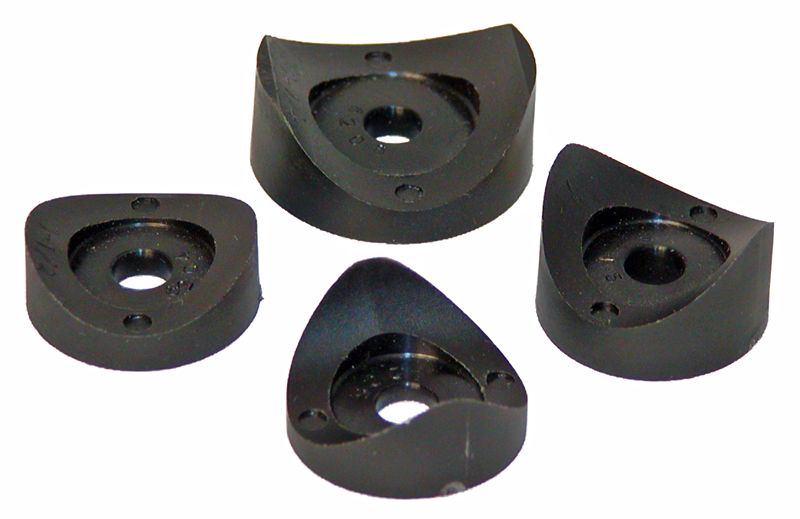 Less expensive at Wicks Aircraft Supply, one can get the plastic version.

If one is even slightly handy and has appropriate tools, one could create a set by drilling aluminum or plastic block to the required diameters and slide of sections to create saddles.

The key feature of this device is spreading the forces over a greater surface area, reducing the stresses that would result if the join were done by bolt only.

Not the answer you're looking for? Browse other questions tagged bolting shear stiffness or ask your own question.

1
Rotating a bolt around the centre
1
Shear strength of reinforced concrete filled PVC pipe
2
What is the name for a bolt hole with a slot that allows the bolt to be inserted or removed when the nut is loose?
2
Maximum shear force of metric steel bolt
0
Instrumented Bolt - Conversion of measure strain/stress to clamping force
6
Fixing a blind bolt hole when the first 2-3 threads are ruined?
1
Bolt preload confusion
7
Metric bolt shear strength for a layman