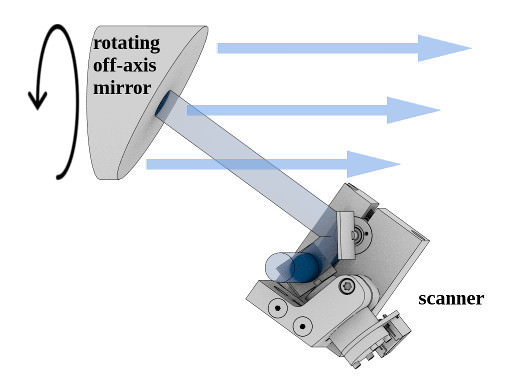 2) the off-axis mirror can be rotated as an the diagram to any angle needed,

can the beam shooting at any point on it from the scanner be made parallel to the middle beam bounced off of the off-axis mirror?

No. The final mirror on the scanner has a smaller surface area than the 'rotating off-axis mirror'. Consequently, for a beam of light to hit near the edge of the larger mirror, it must be diverging from the centreline connecting the centre of those two mirrors. As the light paths are diverging, they will not be parallel after the off-axis mirror, unless that mirror is not flat. 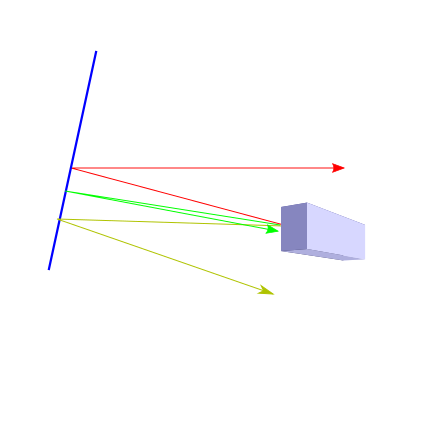 This is a basic physics and math problem

and your very initial idea for solving it is wrong! 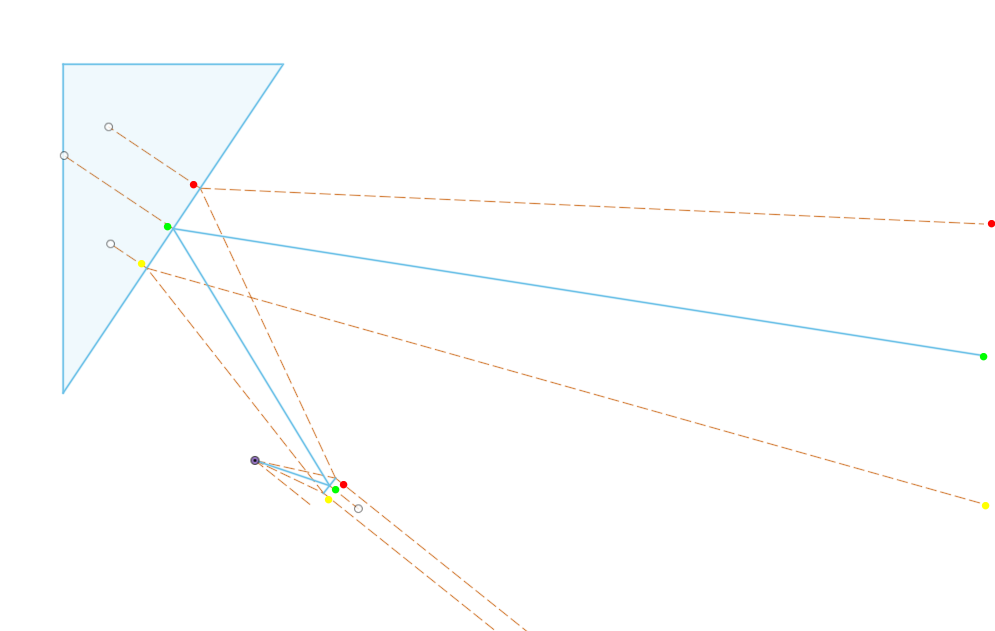 Light waves travel linearly. When they hit a reflective surface, they change direction according to entry-angle is equal to exit-angle, a shown above. The green-marked path hits the center. Unless the mirror is a curve or we actually use a laser, the outer bounds of the ray will be diverging - the Fisheye effect, shown with the red and yellow paths.

Now, let'S for simplicity assume we have a laser. by twisting the mirror by -2° on the red path and +2° on the yellow we get the same picture of divergent paths. 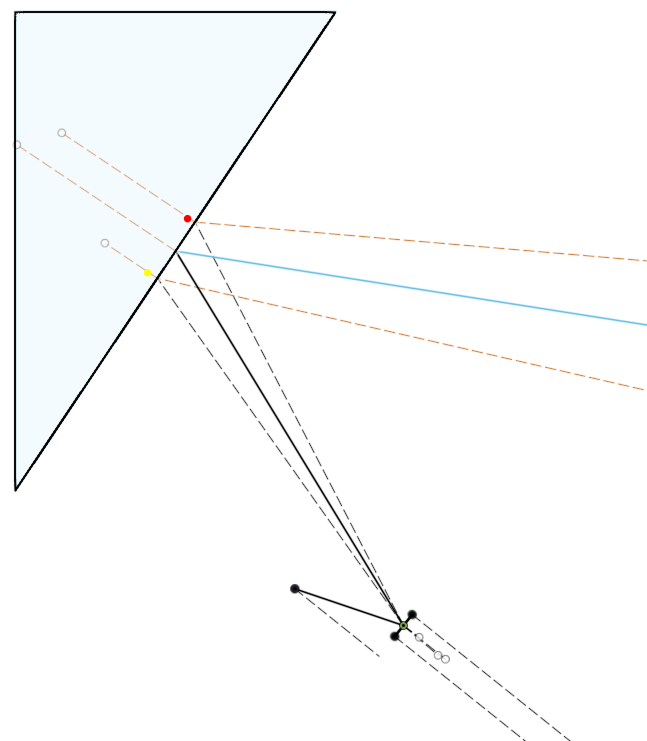 To keep the rays parallel we may not adjust the angle, but only the distance of our initial mirror: to hit more on the far side of our rotational mirror and get a stream that is parallel to the one when we hit the center, we need to move further away (red), to hit closer we need to move it shorter (yellow). 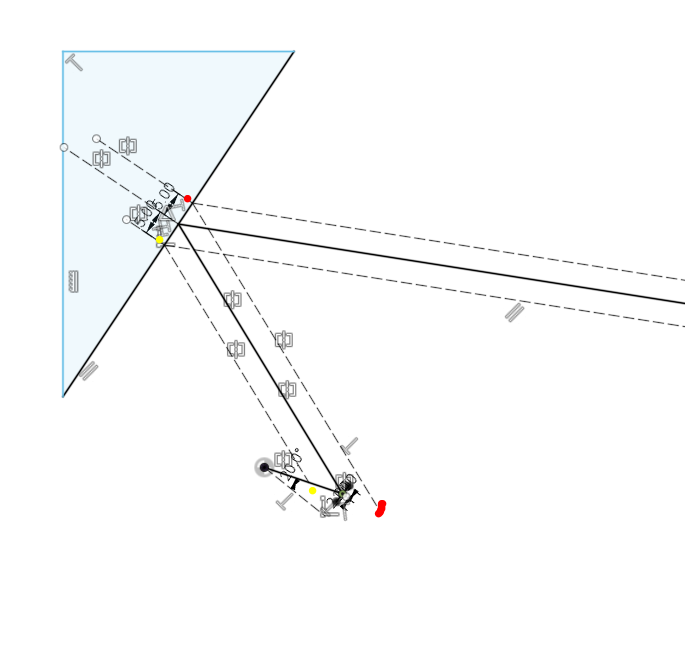 Instead of varying the distance, the mirror could also move on a curved path to create the shifted parallel rays needed: 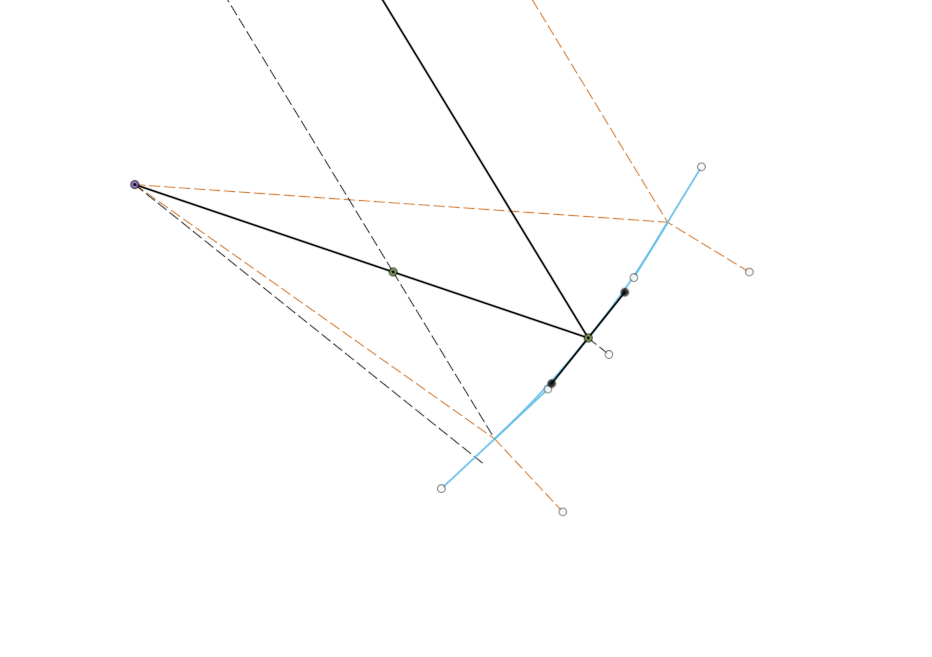 Not the answer you're looking for? Browse other questions tagged optics photonics or ask your own question.

4
Focusing light from a laser shot into one point
9
Can cameras+display screens with window/mirror-like optical behaviour exist?
2
Is it possible to reduce the divergence of a red laser pointer beam from 40 degrees to 1 degree?
0
how to implement autofocus for video projector
0
rotating mirror system for shifting a beam?
2
Using phone screen as a barcode