Construction joints in concrete footings or walls are places where the concrete pour can be stopped so that everything doesn't have to be poured at once. Later, once the concrete has hardened, the next part of the concrete can be placed against the previous pour. These locations are sometimes planned for in the design, and special details are added to the plans to show how the construction joint is to be formed.

A typical detail of one of these joints from MODOT is shown below: 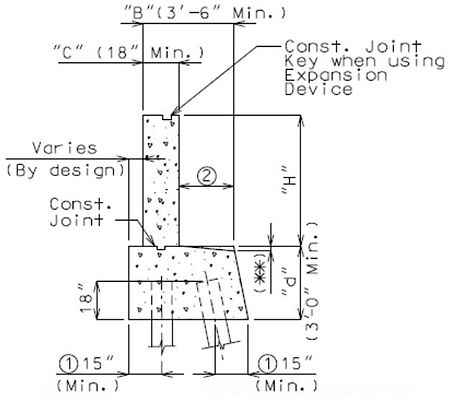 These joints have a "key" formed in them so that when the next batch of concrete is placed, there isn't a flat shear plane across the entire wall thickness. The "key" is supposed to help to transfer shear across the joint. In the US, the blockout is typically formed by placing a 2x4 (2 in x 4 in nominally) board in the fresh concrete.

Sometimes a rubber or plastic waterstop is cast into the concrete at these locations to help keep water from flowing through the joint.

While I have seen this detail used many times, I have never seen a calculation done to design it. This exact same detail is used no matter what the thickness of the wall is or the shear force that may be acting on the wall.

How do you design (or check) a shear key like this?

Typically one does not consider the key when checking a slab - footing interface. This is based on ACI318 Section 15.8.1.4, which discusses the transfer of lateral forces to footings and directs the reader to Section 11.6. 11.6 which says this,

11.6.3 A crack shall be assumed to occur along the shear plane considered.

Therefore, you do not consider the key to be acting in any way structurally because you are to assume that a crack will form at the plane defining the intersection of the wall and footing.

Section 11.6.4 goes on to discuss how the nominal shear-friction capacity of the cross section is calculated, what coefficient of friction to use, and how much the concrete should be intentionally roughened at the cross section.

In my experience, these keys are typically added (by the request of the architect) to combat water intrusion at the concrete joint.