Why can't energy be entirely recovered from a moving car's rotating wheels?

I have a friend who isn't properly visualizing energy loss in a moving car.

His idea: Cars that can run forever without being recharged - - > while the engine rotates the front wheels the move the car forward, there is a device at the back wheels using the back wheels' rotation to generate and store power. The engine draws this restored power to move the car forward and the cycle continues. Now, this is a "perfect" scenario where there's zero energy loss through friction, heat, sound, etc.

I first told him that something similar was already being done: regenerative braking. He said his idea was to generate energy **while* the car was moving.

My counter to why that was rubbish: I reminded him the amount of energy in a given system remains constant. Nothing created or destroyed, just transferred form one form to another. Thus he could not "recover" energy that was being spent to move the car forward. He moved on to elaborate that there would be two engines, one rotating the front wheels with an attached dynamo to recover energy, and another rotating the back wheels. I tried to explain he had added another energy consumer, with no way to recover this extra energy being spent...and that's how it would go. You add an extra engine to overcome the dynamo's resistance and move the car, you are spending more than you are recovering, and will eventually have to charge up. To help him visualize, I made a sketch, trying to be more realistic: 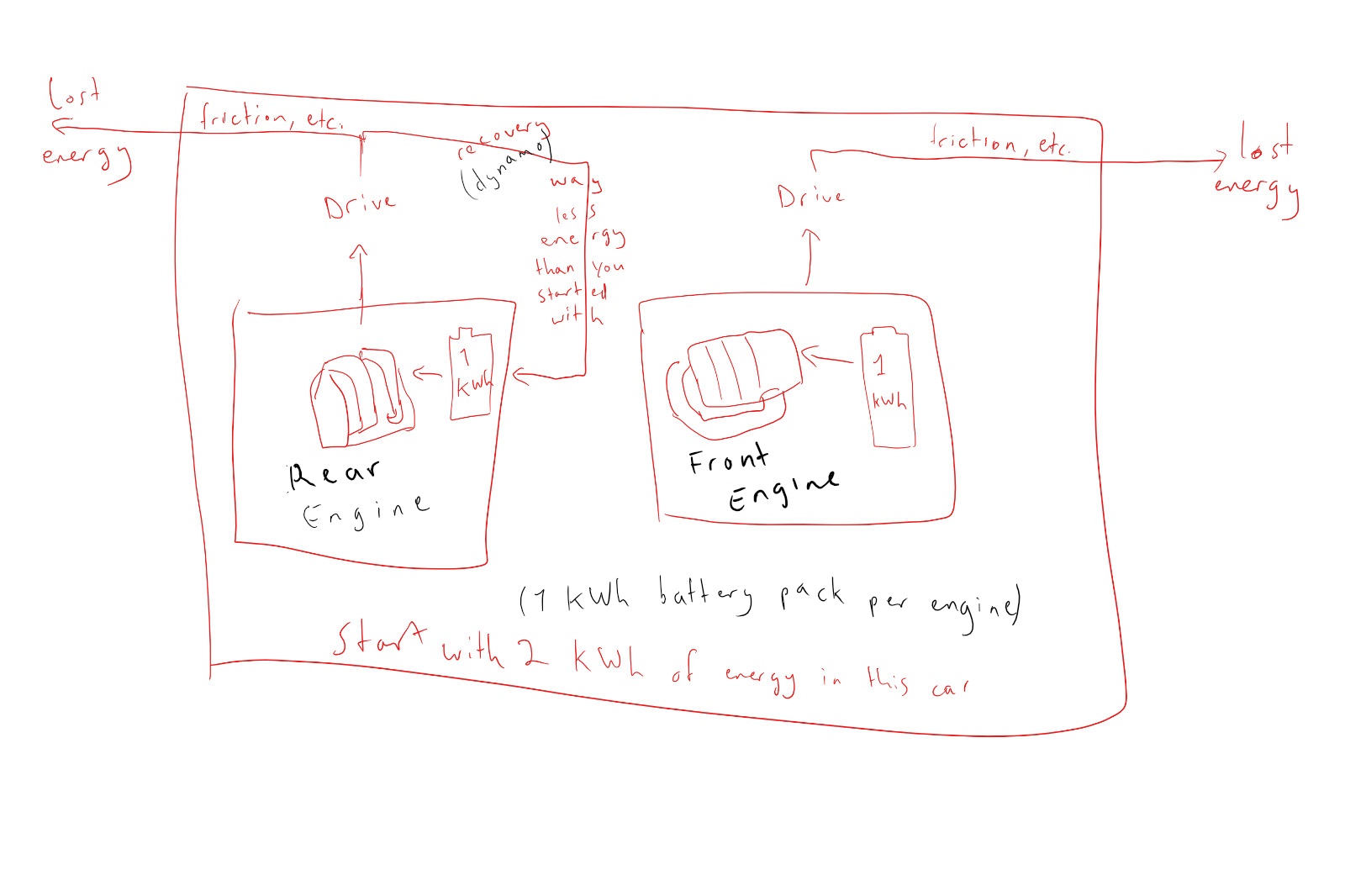 (please ignore my use of battery capacity, it's only there for the concept, not to be realistic)

I also mentioned to him that this scenario was even ignoring the other loads of problems and dangers that present themselves with having wheels rotating at different speeds. Plus the wear on the slower rotating ties which are effectively being dragged against the road. For some never-to-be-discovered reason, he simply could not understand that to get the slower (front) tires to NOT be a problem, you have to increase the front engine power output for to match the wheel rotation speed of the rear wheels. Again, only recovering a fraction of that energy (where did the rest of it go? He can't understand and I can't figure out how to explain it to him). To counter my logic, he proceeded to mention that trucks don't have an engine attached to all their wheels. Hence, some energy can be captured from those "free-spinning" wheels. Oh my God. Newton's first law of motion applies here: A car with the engine rotating the wheels towards a given direction goes nowhere if say, a dynamo is offering equivalent or greater resistance in the opposite direction to capture that energy (again, assuming a "perfect" scenario with no energy loss). I tried to elaborate that to move the vehicle, you first exert a force (engine power output) great enough to move the vehicle from its static position (resistance? gravity? I don't understand physics enough to know what to call this), and anything like a dynamo (friction, resistance) serves to make that more difficult, so you can't simultaneously "recover" energy you are spending. I proceeded to explain that regenerative braking worked because the generated energy was being recovered from the moving vehicle's momentum through offering resistance, hence why the car slows down and why you can't sustain-ably use it while the car is in motion.

This guy is super stubborn to being corrected once a very dim bulb lights up in his mind and he believes it a genius idea and can't be dis-proven. I am horrendous at teaching constructively, and would appreciate someone breaking down why his idea is a victim of basic laws of physics.

I even stated if that were possible, it would already have popular applications in industry like electric vehicles.

Get a small DC motor from a cheap toy or something and put a gear or a flywheel or something on the shaft to make it easy to spin with your fingers. You should find these in the toy as well.

Ask your friend to spin the motor while nothing is attached to the terminals. He will find that it spins easily and some momentum keeps it going for a short while.

After that, connect a small light to the terminals and ask him to spin the motor again. He will see the bulb light up but also feel that it is much harder to rotate the shaft and it brakes immediately after he stops spinning it.

This way you can show him that he has to personally put in extra effort (energy) to generate electricity to light up the bulb.

Taking this concept back to the vehicle:

Tell him that if you connect that motor to the free-spinning wheels, the wheels won't be free spinning anymore, they will feel the same resistance he felt. Thus, to keep the rear wheels spinning at the same rate, you need to put more energy into the front (driving) wheels in order to overcome that resistance.

If you need to add extra energy to the driving wheels, it is defeating the purpose of generating energy from the rear, "not-anymore-free-spinning", wheels.

As @Fred said, he will probably still not change his mind, but I think this is a good illustration for someone that is open for persuasion or are just starting to learn these concepts.

There are some people who cannot be told. They think they know everything and that they are never wrong. My advice is do not try to convince your friend that your friend is wrong. You will always lose the argument. State what you think and if your friend rejects that, leave it at that and talk about something else.

The other thing you can do is to tell him to "prove" his ideas by making such devices himself. Hopefully your friend has enough intelligence to eventually realize that your were correct.

Your ideas are sound.

What your friend is assuming is that is possible to construct a perpetual motion device. Which sensible people know cannot be done.

The main reason why your friend is wrong is that your friend is not considering energy loss via friction, electrical resistance and the generation of heat and noise.

All these forms of energy loss may be reduced, but never eliminated.

If this is "perfect" — as you say — with no friction, no losses... then why do you need the engine to maintain cruising speed?

Once you reach cruising (i.e. constant) speed, the job of an engine is to give energy to the rest of the car for all the energy it loses to air friction and road friction.

If your friend did not have air or road friction — say by being in a Hyperloop — then all they would need is a shove to get up to speed, and then they would turn the engine off and just keep coasting.

So their own premise proves why it will not work, because if they need an engine to maintain speed, then they are having losses, and the system is not "perfect" as postulated.

The problem with his logic is once you attach a dynamo you no longer have a "free-spinning" wheel. The dynamo produces resistance (braking). Even if the dynamo has no loss it only produces the power needed to spin it. In the perfect scenario on blocks could spin the wheels but the car has no net horse power. The engine consumes all the power produced and the car is not moving. The car has no power to propel itself.

Say this was a generator on a dam. If there was zero loss you could pump the water back up into the dam but you produce no net power. All the power is used to pump the water.

Not the answer you're looking for? Browse other questions tagged automotive-engineering energy regenerative-braking or ask your own question.

16
While going downhill, does my car consume less fuel when in neutral or in gear?
20
Why do cars turn by turning the front wheel?
1
Is it a good idea to start any engine once in a while?
1
How does friction help a car to turn?
2
How to Understand the Relation of Compression Ratio and the Octane Number?
1
How fast could a Mini Cooper go in a vacuum?
7
When a car with an open differential turns, why does the inner wheel slow down and the outer wheel speed up?