What is a Spiral Curve, and How is it Different from a Normal Curve?

I've heard the term spiral curve used to describe a section of highway that is more aesthetically pleasing to the driver's eye. However, I believe I've driven on enough road to say that I can't definitively tell the difference between any given curve other than how "sharp" it is.

Could anyone explain how one can determine if a section of curve on a highway is classified as a "spiral" curve, and are there other advantages besides "making it look good"?

A spiral curve is a geometric feature that can be added on to a regular circular curve. The spiral provides a gradual transition from moving in a straight line to moving in a curve around a point (or vise-verse).

In the image below, the spiral is the red portion. 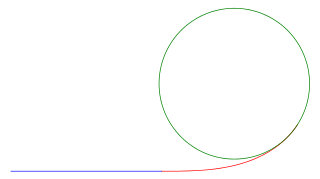 On highways, the lanes are wide enough that you can drive a spiral just by moving from one side of the lane to the other. Sometimes this is referred to as, "Straightening out the curve." For this reason, spirals are not used on all curves in highways.

One industry where spirals are used extensively is the railroad industry. Cars on a road have the freedom to move from one side of the lane to the other, a train does not have that luxury. A train is guided rigidly by the rails and has no room to deviate.

On railroad tracks, all but very low speed curves have spirals on both sides of the curve. This provides a gentle transition in lateral acceleration. This greatly improves passenger comfort. Spirals are used on freight lines because they also reduce the forces on the track components themselves.

One disadvantage of the use of spirals is that it increases the amount of space required for each curve. Spirals effectively lengthen the curve.

It isn't a question of being "aesthetically pleasing to the eye", but rather of comfort.

If you had a curve that was simply a circular arc, upon entering that curve, you would immediately feel a sideways centripedtal force that is proportional to your speed and inversely proportional to the radius of the curve. In other words, you would have to suddenly jerk the steering wheel to a position that would allow you to follow the curve, and just as suddenly jerk it back to straighten out again.

Instead of this, highway curves have an "easement", which means that they follow a shape in which you gradually steer into the curve and then gradually steer out of it, giving a gradual increase and decrease in the sideways force that is felt. Mathematically, the shape of such a curve is a logarithmic spiral.

Q: ...how one can determine if a section of curve on a highway is classified as a "spiral" curve, and are there other advantages besides "making it look good"?

A: The purpose of a spiral or transition curve has nothing to do with aesthetics. They were originally introduced on railways for safety reasons in conjunction with superelevation as explained here: Notes on Transitional and Terminal Curves. On high speed highways, they permit a driver to enter/exit a circular curve with gradual increase/decrease in the deflection of the steering wheel. The mathematical form of the spiral may vary from jurisdiction to jurisdiction, and may have changed in recent decades as hand-held calculators and other computing devices replaced the hard-copy field tables once used by surveyors. One common form is the Euler Spiral or clothoid. I have read that in India the usual transition curve is a third-order hyperbola, and I have been told that in Germany autobahns are designed as a continuous series of connected clothoids with no tangential sections or circular curves.

Not the answer you're looking for? Browse other questions tagged civil-engineering highway-engineering surveying rail or ask your own question.

31
What are the pros and cons of a traffic circle versus a traffic light intersection?
0
Normal and tangential stresses
0
Why do normal tunnel boring operations not use the dirt (from the boring itself) for reinforcement rather than bringing it from other sources?
1
What are the factors that made narrow-gauge railways cheaper in the early 1900s, and are they still applicable today?
18
What are the engineering principles for a train to get electricity from the railway
5
What are these banded earthworks near a freeway overpass for and what are they called?
3
How exactly do forces transfer in different directions?