Why are most standard bolt threads single start?

When looking at thread descriptions, one of the basic properties is always the number of thread starts. 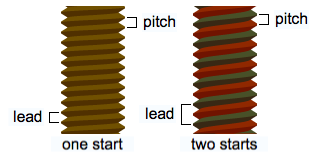 As far as I could tell, all of the major standard bolt threads are single-start. This includes:

I only found one standard thread that can also come in a multiple-starts: ACME.

As Dave Tweed points out, the ratio of torque to tension is lower the lower the lead angle is. Since the important measure of bolt tightness is generally the tension in the bolt, we want to achieve that minimum pretension with the least effort possible. Assuming we have to maintain a certain shear area of the thread (so the the threads are stronger than the bolt when fully engaged) having two starts means we double the lead angle and greatly increase the amount of force required in the wrench to tighten the fastener appropriately. On its own though, this isn't the end of the world in practical applications because a big enough torque arm, (or a shear wrench) makes this just a matter of using a bigger motor.

The bigger problem is that we want bolt threads to be self-locking. That is, we wouldn't want the pretension in the bolt to cause it to loosen. Imagine if the bolt had 10 starts, and therefore a very steep helix for the threads - no matter how hard we tighten the bolt, the pretension will immediately loosen the bolt when we let go of the wrench. This is because the lead angle lets so much force transfer into the rotation of the bolt (or nut) that it can overcome the friction between the internal and external threads. This would make the bolt not very effective without an external locking device. By contrast, standard single start fasteners are often pretensioned (or simply made snug tight) and trusted to self-lock based on their shallow lead angle. In situations with high vibration or thermal cycles, additional locking elements may be used, but they aren't normally required if the bolt is properly tightened.

Screws which form their own mating thread in another material are often two-start, as they have an additional resistance to unscrewing from the compression and roughness of the substrate they displaced around the threads. This is the case with some sheet metal screws, and also most wood screws.

For any given size of fastener and given thread pitch, a single-start thread gives you the greatest mechanical advantage in terms of the torque required to achieve a given tension.

Aside from acme threads that are often used on leadscrews for mechanical motion (e.g., CNC machinery), the only other place I have seen multiple-start screws is on self-tapping screws used to fasten plastic cases together. In such applications, the speed of assembly is more important than the tension, which is limited by the plastic anyway.

In Addition to the other answers, manufacturing of single-start threads is more simple thus easier to control from a quality perspective. Also, Multi-start threads are typically used for motion control not fastening(unless special cases as described above for specialty plastic fasteners and such)

Single start threads are commonly use since it has large mechanical advantage & also it has self locking property because in multistart thread,this property is lost

Not the answer you're looking for? Browse other questions tagged threads fasteners or ask your own question.

10
Are threads machined from high tensile steel more susceptible to damage?
6
Why are Whitworth threads angled at 55°?
6
How are non-continuous internal threads plastic injection molded?
6
Fixing a blind bolt hole when the first 2-3 threads are ruined?
1
How do british standard pipe parallel (BSPP) (G) threads seal?