Effective length for lateral torsional buckling in a laced strut

When loaded vertically, a beam experiences compression in its top flange and tension in its bottom flange. The top (compression) flange would tend to buckle vertically much like a column, however, the web prevents such buckling from taking place. But if there is enough compression with no lateral support, the flange and web would start to buckle horizontally together. The bottom (tension) flange restrains such movement, causing the beam to twist. This is phenomenon known as lateral torsional buckling (LTB). 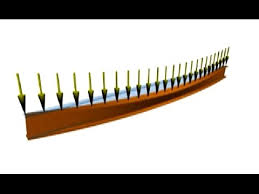 A laced strut is a built-up strut made of two (or sometimes three equally spaced) beams joined together by a system of diagonal lacings. 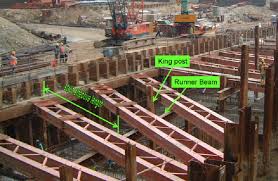 Globally, a laced strut is not susceptible to LTB as its section modulus in the lateral direction is greater than that in the vertical direction. However, the same could not be said of the individual beam component that made up the strut.

If a 20m strut has lacings spaced at 1m intervals, what would be the effective length used to calculate LTB for the individual beam component and why?

First off, Lateral Torsional Buckling (LTB) is only applicable to beams. Beams are members that are loaded so that they have moment. This is what the first image shows. The members in the second image are not beams. They are struts that are loaded primarily axially. They are holding the walls of the excavation apart.

This means that LTB is not a controlling consideration for the struts as pictures. The rest of this answer does have some portions that would be applicable to both columns (struts) and beams though.

The lacing of two members together effectively makes the built-up member act as a whole. The controlling properties are now the combined section properties instead of the individual properties.

Individual codes might use different equations or methods to check for LTB, but the basic mechanics are the same. The distance between braces on the built-up member is what matters for a given section.

In laced members, the lacing is the smaller bars that go between the main members. This is typically in a zigzag pattern. The lacing is there to tie the members together to make them act as one. For an individual member, the lacing effectively braces it at each location.

The bracing must be designed so that it can transfer shear from one member to the other. In the US, codes require the lacing to be designed for about 2% of the axial load in the build-up member. AISC and AASHTO have limits on the spacing of the lacing connections based on the buckling of the compression flange of the member between lacing points.

Assuming that the lacing is designed as required, the built-up member will act like one section and the individual components do not need to be analyzed individually.

Lacing is not considered external bracing. The lacing bars are an efficient alternative to providing solid cover plates to create a built-up member. Bracing is external to the member as a whole.

To your question, the individual members will be braced at the 1 meter intervals and, this would be relative bracing. This distance is too far apart to be considered lacing.

8
Unbraced Length for Lateral Torsional Buckling vs. Yield Strength
4
Arranging members within a truss efficiently
3
Stirrups are not shear bearing diagonals but just spacers?
2
How to calculate the lateral bending capacity of a laced strut?
4
Why are steel I-beams mostly symmetrical?
3
How to measure the unbraced length of lateral torsional buckling for negative moment in a W-shape steel beam?
1
Calculating area moment of inertia for a beam with underslung plate?
3
Failure in Hollow, Thin Beam due to Collapse of Cross Section
1
Why the vertical shear stress in the flange neglected?
0
Why isn't lateral torsional buckling of rectangular timber members dependent on torsional stiffness?