I am having trouble conceptualizing this problem. I have attempted it but am confused about a few things, I would highly appreciate any insight or advice for this. 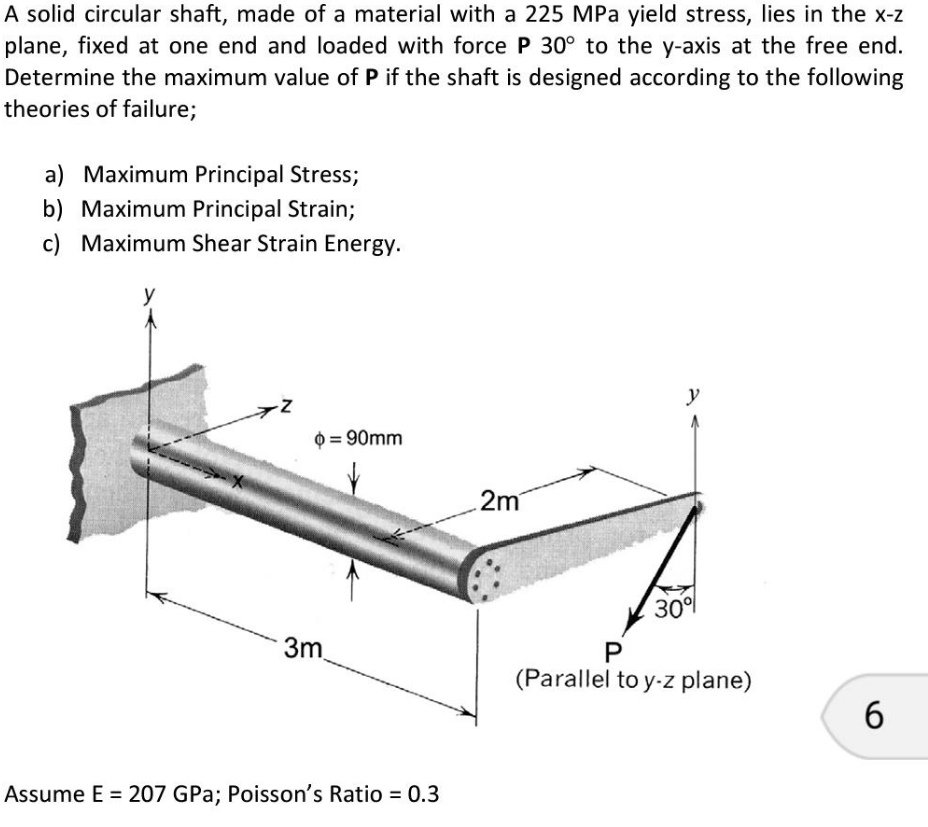 I know you need to resolve P into its Y and Z components and that you can move them to the end of the beam.

But, my lecturer said that both Py and Pz contribute to σxx.

I'm a little confused as to how this is possible when they are orthogonal to each other.

Both cause bending on the beam (Py causes torsion) but do they not bend the beam in different planes therefore shouldn't they contribute to different stresses?

The confusion seems to arise from a misconception about how $\sigma$ is defined. For example, $\sigma_{yy}$ corresponds to a force in the $y$ direction applied to a surface facing the $y$ direction. Both $\sigma_{yy}$ and $\sigma_{zz}$ are zero essentially everywhere in the shaft (idealizing it as long and narrow) because there's no distributed region where a $y$-or $z$-direction force is internally or externally applied to a $y$- or $z$-direction surface, respectively.

(I'm not including the point loads at either end, which are localized. It's implicit in these problems that stress concentrations can be ignored and that failure doesn't arise directly in the attachment, though it may occur within the shaft adjacent to the attachment or point of load application.)

The key point is that a single stress component is not necessarily uniform in an object; here, for example, $\sigma_{xx}$ varies across the surface and interior of the shaft.

This is a very important point, so I suggest reviewing a good mechanics of materials text (e.g., Beer and Johnston) until it's familiar.

Not the answer you're looking for? Browse other questions tagged mechanical-engineering structural-engineering materials structures stresses or ask your own question.

2
How to describe the rotation of opposite ends of a body due to an applied moment
1
From strain to displacement in 3d
7
Energy of a 3D Timoshenko beam
2
Failure due to shear stress on rod lip?
3
Caulculating maximum shear stress at certain points
1
Trying to shed some weight on my design, any thoughts?
1
Calculating area moment of inertia for a beam with underslung plate?
3
Failure in Hollow, Thin Beam due to Collapse of Cross Section
0
Stresses due to combined loadings in a bent shaft supported at both ends