Transmitting power over long distances what is better AC or DC?

I found this answer to a related question. The part of the answer that's confusing me is:

Transmitting DC power over a long distance is inefficient. Thus AC supply is a far more efficient to transmit power.

According to Siemens it's quite the opposite:

Whenever power has to be transmitted over long distances, DC transmission is the most economical solution compared to high-voltage AC.

HVDC transmission losses are quoted as less than 3% per 1,000 km, which are 30 to 40% less than with AC lines, at the same voltage levels.

Is the posted answer correct?

Chris H made a very important observation (see his comment below): The context of the post I mentioned was of low voltage whereas I was blindly thinking of high voltage. Indeed I learnt loads by the answers and comments. Thanks.

It is more efficient to transmit DC using about the same infrastructure. This is because of several effects:

Another advantage of DC is that it doesn't require synchronization between grids. Two AC grids need to be phase-synced to be connected together. This gets tricky when the distances are large enough to be significant fractions of a cycle.

The flip side is that AC is easier to convert between voltages. Converting DC back to AC to dump it onto the local grid at the receiving end is not a trivial process. It takes a large plant to do this, which means significant expense. That expense is only worth it if the transmission distance is long enough so that the efficiency savings outweigh the cost of the DC-AC conversion plant over its lifetime.

Here is a example of what it takes to convert high voltage DC back to AC: 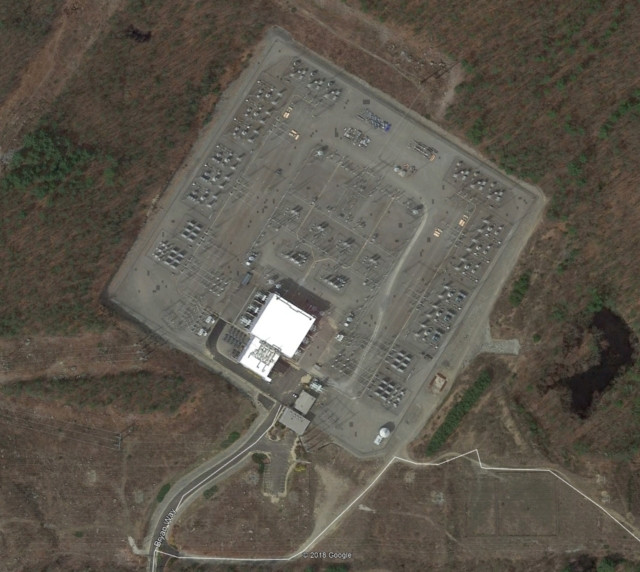 DC power from large dams in Quebec enters at top right. This plant converts that to AC and dumps the power onto a large regional AC transmission line in Ayer Massachusetts at 42.5702N 71.5242W.

The expense of building and operating this plant is worth it due to the significant power savings of transmitting DC instead of AC. Synchronization was also a factor in using DC.

I actually worked on HVDC schemes, back in the mid-to-late 90s. Olin Lathrop's answer is partially right, but not quite. I'll try not to repeat too much of his answer, but I'll clear up a few things.

The losses for AC primarily come down to the inductance of the cable. This creates reactance for AC power transmission. A common misconception (repeated by Olin) is that this is due to transferring power to things around it. It isn't - a coil of wire halfway between here and the Magellanic Cloud will have precisely the same reactance and cause precisely the same electrical effects sat on your desk. For this reason, it's called self-inductance, and the self-inductance of a long transmission cable is really significant.

The cable does not lose any significant power from inductive coupling with other metalwork - this is the other half of that common misconception. The effectiveness of inductive coupling is a function of the AC frequency and the distance between the cables. For AC transmission at 50/60Hz, the frequency is so low that inductive coupling at any kind of distance is utterly ineffective; and unless you want to get electrocuted, those distances have to be several metres apart. This just does not happen to any measurable extent.

(Edited to add one thing I forgot) For cables running underwater, there are also very high cable capacitances due to their construction. This is a different source of reactive losses, but is significant in the same way. These may be the dominant cause of losses in underwater cables.

Skin effect does cause higher resistance for AC power transmission, as Olin says. In practise though, the need for flexible cables makes this less of an issue. A single cable thick enough to transmit significant power would generally be too inflexible and unwieldy to hang from a pylon, so transmission cables are assembled from a bundle of wires held apart with spacers. We'd need to do this anyway, whether we were using DC or AC. The result of this though is to put the wires within the skin effect zone for the bundle. Clearly there is engineering involved in this, and there will still be some losses, but by this happy coincidence we can make sure they're a lot lower.

Buried and submarine cables are a single thick cable, of course, so in principle they could still get bitten by the skin effect. Heavy-duty cable construction though will generally use a strong central core which provides structural integrity for the cable, with other connectors wound onto that core. Again, we can use that to our advantage to reduce skin effect in AC, and even HVDC cables will be built the same way.

The big win in power transmission though is eliminating reactive losses.

As Olin says, there is also an issue with joining two power grids together, because they will never be exactly the same frequency and phase. Clever use of filters in the mid-20th century did allow connection of grids, but designing these was as much art as science, and they were inherently inefficient. Once you've got your power transmitted in DC though, you can reconstruct AC with the exact same frequency and phase as the destination grid, and avoid the problem.

Not only that, but it is much more efficient to convert from AC to DC and back to AC again, instead of trying to use filters to compensate for phase and frequency. Grids these days are commonly joined with back-to-back schemes. These are essentially both halves of an HVDC link next to each other, with an enormous busbar between the two instead of kilometres of transmission cable.

The people saying "DC is less efficient" are using the word "efficiency" to talk about design factors like complexity of conversion hardware, and more critically, its cost.

If we have a Santa Claus machine that can pop out DC/DC converters as cheap and reliable as comparable transformers, then DC wins. (on skin effect alone). However out in the practical world, once your boots are laced up and lineman's gloves are on, you run into a few other hitches.

All else being equal DC transmission is more efficient than AC transmission at the same nominal voltage due to the elimination of reactive losses.

However all else is rarely equal.

The result is that DC systems have tended to operate at lower voltages than AC systems and this is what has got DC it's reputation for being inefficient.

Voltage has a massive effect on cost and/or efficiency of transmission. If you halve the voltage then to maintain the same level of resistive losses you have to quadruple the size of the conductors. Alternatively you have four-times the losses for the same size of conductors. So the ability to easilly convert voltage allowed efficient and economical AC transmission systems to be built. Even today AC remains the default option for most transmission and distribution needs.

The exception to this is very high power point to point power transmission over long distances, over undersea cables or between non-synchronised grids. In these cases the costs and hazards involved with converting the AC used on the grid to high voltage DC become more justified.

Not the answer you're looking for? Browse other questions tagged power-transmission or ask your own question.

21
Would it make sense to have a 12V lighting circuit in a house?

0
Is transmitting windmills' mechanical power to ground level that complex?