Would creep have been a major problem for pykrete designs?

During world war two the British had plans for an aircraft carrier made of pykrete (a mixture of 14% sawdust or wood pulp and 86% ice.) the idea was to have a refrigeration system to stop the ice from melting however I can't help but think that since the temperature would still be very near to the melting temperature of ice that creep would have been a problem. does anyone have any knowledge about the properties of ice regarding creep?

Edit: see here for a contemporaneous study of this exact question: Perutz, "A description of the iceburg aircraft carrier," Journal of Glaciology (1947). 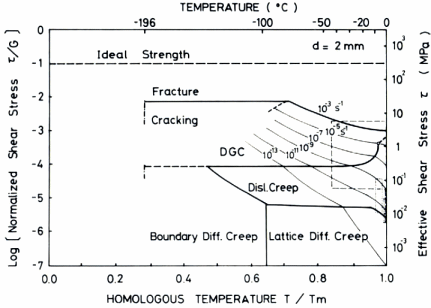 Michael Ashby, who contributed substantially to developing and popularizing these types of maps, performed a case study on Antarctic ice that included the following map for ice with a grain size of 10 mm:

The trends shown in these maps emphasize the importance of ensuring low stresses if ice is to be used as an engineering material near its melting point without substantial creep deformation.

Note that these diagrams are for pure ice; the presence of a binder can be expected to alter the dominant failure model and strain rate. I haven't found a corresponding map for pykrete. However, the first link (given in the edit comment) suggests that the relevant parameters are a normal stress of approximately 70 MPa—presumably corresponding to a shear stress of approximately 35 MPa—and a temperature of -15°C. It's also emphasized that the addition of the wood pulp/sawdust can strongly suppress long-term ice creep. The other links here provide an introduction for the various modes of creep that apply and a general idea of the strain rates that can be expected.

Not the answer you're looking for? Browse other questions tagged materials temperature creep or ask your own question.

0
Which types of steel would be most appropriate for blunt cutting weaponry on a combat robot?
0
Have there been/is there a scale about the difficulty of a ground for using a pickaxe?
0
Carefully attaching Pt-wire to mild/carbon steel surface
2
Would an orthotropic cylinder subjected to torsion have warping?