Why did steam locomotives not transfer power by cogwheels?

Why did the engineers not use cogwheels? Would steam locomotives had been faster if they had used cogwheels?

I would like to point out that modern cars do not use cogwheels for transmission, they use shafts. Cogwheels are used for the gearing and differential.

But bar mechanisms were used mostly because they didnt have the kind of manufacturing facilities as we do today. Bar mechanisms are easy to make, they are flexible and field maintainable. In any case in this particular design also because the entire mechanism would have had to turn the power transmission direction 2 times. See the piston is directly connected to the front wheel and transfering that to the subsequent wheel is pretty simple with a bar while a shaft coupling would have needed more parts, which again were hard to manufacture.

Steam piston engines can generate a lot of torque from stationary and the pistons can be physically remote from the boiler, so in most cases it is most convenient to have the pistons directly drive the wheels via a crank. Equally as trains don't have a steering mechanism as such and have conical section wheels, you don't need a differential either.

In contrast, internal combustion engines need to be turning at a fairly moderate RPM to generate useful torque and produce most of their torque and power in a fairly narrow rev range so they need both a means of disengaging drive (clutch or viscous torque converter) and a selectable ratio gearbox in order to provide useful torque at a wide range of road speeds.

Also, IC engines tend to work better with multiple cylinders as this smooths out the power delivery over the various different stages of the working cycle and so need a crankshaft with a common output shaft. Steam engines are essentially pneumatic actuators so you can make the working stroke as long as is convenient and get a reasonably consistent linear force.

The short answer is that the torque characteristic of a steam engine simply means that a gearbox is unnecessary, as torque is more or less independent of RPM for its normal working speed range.

Here is a picture of the crankshafts inside a modern internal combustion engine: 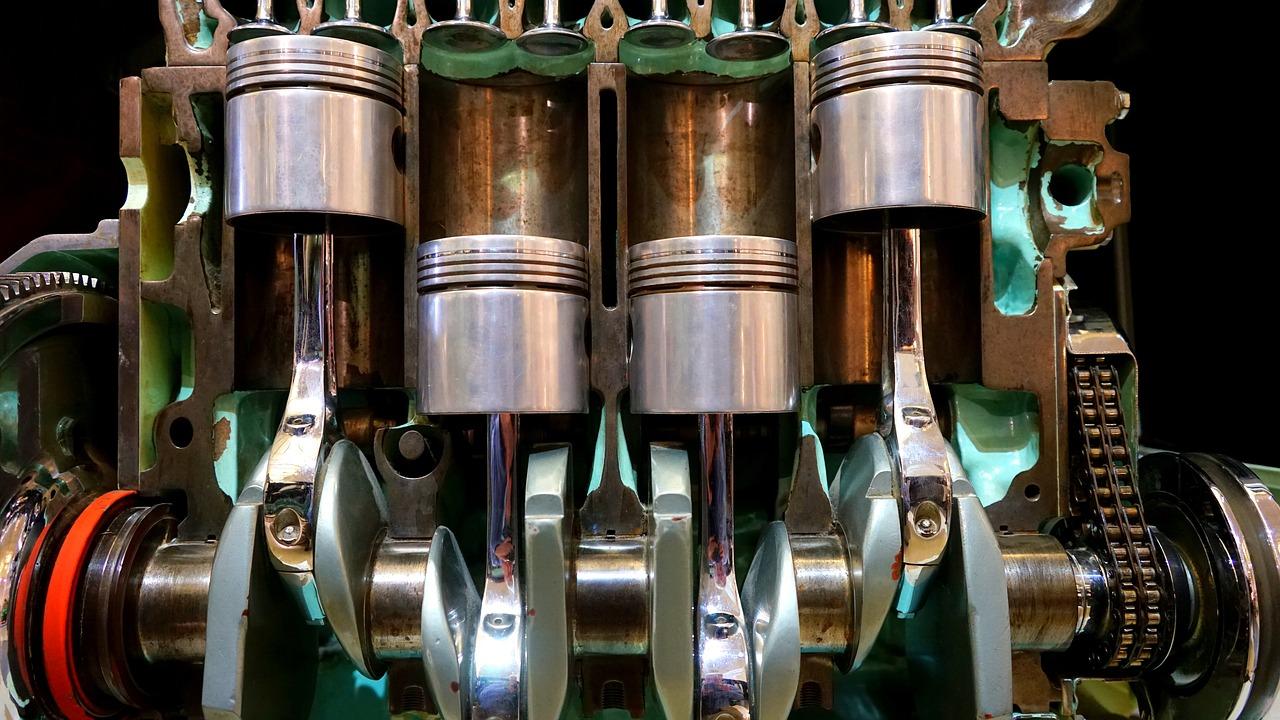 The purpose of these is to convert the back-and forth motion of the piston into rotational motion. It's very much the same mechanism as used on old steam engines: 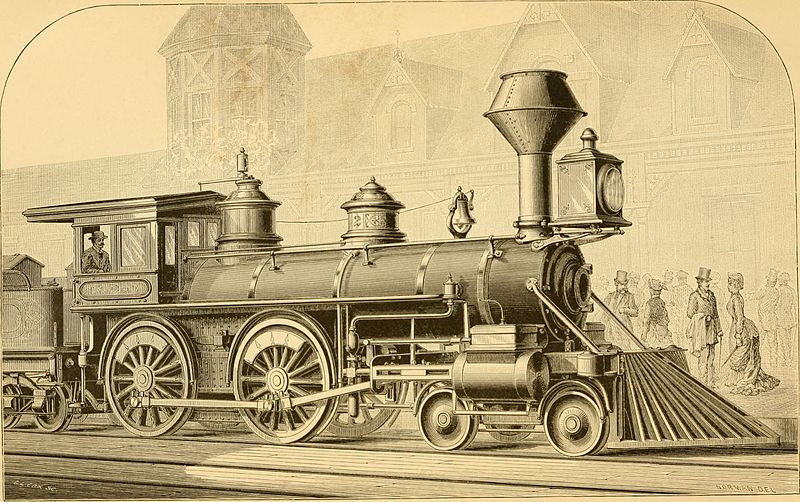 The difference is that in the internal combustion engine the power is not transferred directly to the wheels but to a shaft. The reasons for this difference are discussed in other answers --- I just wanted to point out that the underlying mechanism is the same.

for a while, steam locomotives actually used gears and cylinder/piston sets which drove crankshafts. These were called geared locomotives and they were used to haul heavy loads up particularly steep inclines at low speeds. this made them popular for timber logging operations in the western US during the days of steam power.

for higher speed use on more gradual slopes, the direct-drive method (in which the connecting rod engages the driven wheel(s)) is simpler and furnishes an adequate match between the impedance of the load and that of the engine.

Steam generates full torque at zero speed as has been mentioned elsewhere, so like in an electric car (which has very much the same sort of characteristic), there is little to be gained from a gearbox, may as well drive the wheels directly.

This is also why the vast majority of diesel locomotives above the very small, are really diesel-electric, it makes the near zero speed part of the performance less annoying, and removes the need to try to cool a very high power clutch.

Incidentally a steam loco does have sort of "gearing", in that the driver can control the valve timing to vary the volume of steam admitted per stroke and thus the torque available, this is subtly separate (but interacts with) from varying the steam pressure.... You see this when a steam train pulls away as initially there will be powerful blasts of steam from the stack because the driver has the valve gear set such that there is still significant pressure in the cylinder as the exhaust valve opens (To maximise torque), as the speed comes up the fraction of a cycle the intake valve is open is reduced to improve efficiency and the exhaust note evens out as the exhaust becomes closer to atmospheric pressure. These variable valve linkages were one of the more patent infested waters back then with fights between all the big players.

Gears/cogs would be pointless since there is no rotary source of power on steam locomotives. They use steam pistons, which go back and forth.

As the physics worked out, direct-drive worked out really well with achievable values of piston diameter, stroke/eccentric, and wheel size. Until it didn't. And what got them was the curves.

Mainline pullers stuck with rods: way too big for gears

As fully superheated boilers became very powerful, fast passenger locomotives used this power at higher speeds. For them, the side-rod design was perfect. But slow lugging freight locomotives needed more weight on the rail to transfer the power at low speeds. This required more driving axles to spread the weight. That made a single rigid group of driving axles too long for curves. So they split into two (rarely, three) groups of driving axles. Power transfer was done with an engine on each group, usually simple, sometimes compound. Union Pacific's Big Boy had 8 drive axles in two groups (each with a simple engine, still avoiding gears), handling curves like a 4-drive-axle locomotive.

Taken to absurdity. The Virginian Railway finally gave up and electrified.

At these power levels, 4000-6000 horsepower, gear drive was out of the question: it was an order of magnitude too much power for gears. Even the electric GG1 of the era used twelve massive pinions to transfer a similar amount of power to six axles.

Much smaller engines could be geared

Mountain railroads used low power, lightweight locomotives which had to slither up fairly tight curves. Even a very modest side-rod steam engine was too stiff for the curves. They also wasted a lot of precious weight on non-drive wheels, e.g. the pilot truck and the tender. Ephraim Shay solved this problem with, indeed, geared locomotives. Keep in mind these are small locomotives: the largest, Western Maryland #6, has boiler pressure of 200 psi and a top speed of 23 mph.

Ephraim Shay put a drive shaft along one side of the locomotive, gearing to each wheel. The pistons directly cranked the drive shaft. Note the elaborate telescoping drive shafts, most especially important due to its off-center location. 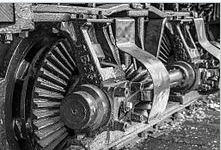 Charles Heisler put the drive shaft down the locomotive centerline, and used a "vee-twin" piston arrangement. Note the side rods: that means only one of the two axles is geared to the drive shaft, the side rods transfer power to the other axle. Side rods like that imply perhaps 100 horsepower per axle.

The Climax Manufacturing Co. took Heisler's centerline-shaft arrangement and added a cross-shaft and more gearing to put the steam pistons in an almost conventional location.

Having seen these geared-locomotive arrangements, you can see where they would not "scale" up to multithousand horsepower outputs.

Not the answer you're looking for? Browse other questions tagged steam or ask your own question.

7
Why do steam and diesel engines have differing cylinder configurations?
1
Why is more steam required to turn a steam turbine when electric power consumption is higher
2
How did the snifting valve in Newcomen's steam engine work?
1
What's this box in steam locomotives?
23
Why use steam instead of just hot air?
0
Why use steam water and not other fuild in steam engines?
1
On the steam locomotives, why was the driver's cabin not located in the front of the boiler for better visibility?
2
On steam locomotives with six driving wheels, why are the rear set of wheels placed further apart from the other two?