I would like to calculate the force exerted on the wall of an underground reservoir. The volume of rocks surrounding the reservoir creates a force equal to the product of the density of the lithosphere, the gravitational acceleration and the height above the reservoir.

What I'm trying to understand is what are the forces created by the liquid inside of the reservoir. How can I calculate these forces? 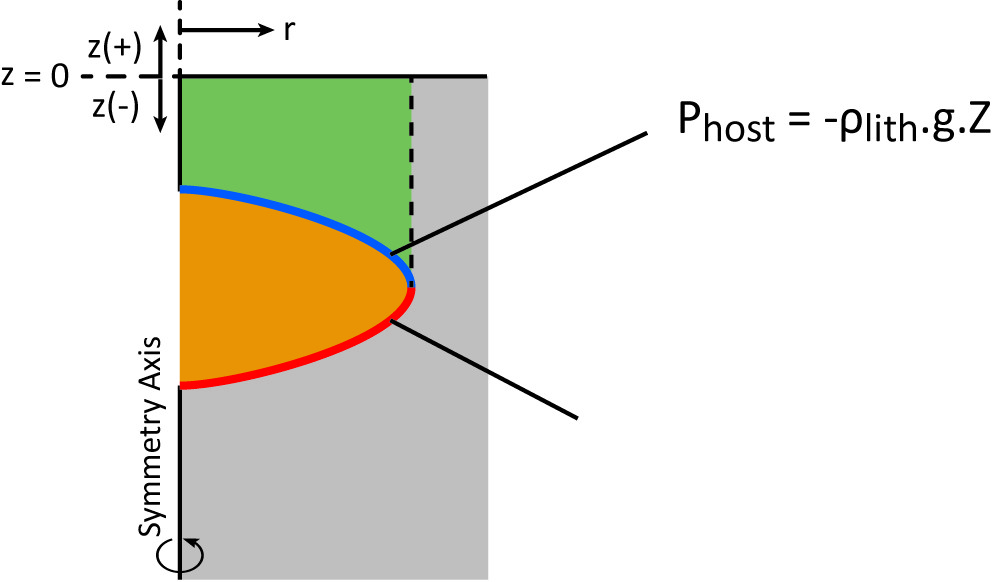 In reality there is underground water and also all variety of oil and mixture of other liquids, such as bicarbonates and other minerals dissolved in water.

Depending on the geology of soils, and the pore pressure of it, we get a wide range of situations. sometimes due to flow of underground water there is even hydraulic head pressure or negative pressure to capillary and osmosis actions.

We consider an ideally simplified case where the whole is large and forces are static and balanced and there is one liquid and no trapped air.

So the total pressure is the weighted contribution of different material added together from grade level down to depth under consideration.

This pressure in the soil layer is transferred laterally by the factors such as passive lateral pressure, bedding angle and structural properties of the soil. When the test bore gets to the level of water/liquid the pressure is equally transferred in all directions.

The soil surrounding this reservoir will react in complex ways, again depending on its structural properties and its content of aggregates. These properties can be determined by the soils engineer using a wide selection of tools. Such as sampling the soils, doing ultrasound and satellite imaging. etc.

Assuming the liquid is static, or mostly static - the most simple answer: The pressure. Force exerted per unit of surface of the wall, in direction normal to the surface, is equal to pressure of the liquid in contact with that wall, and nothing else. Your liquid at the bottom is at 120kPa, it exerts 120kN per meter square of bottom surface in direction normal to the surface. This is true for any infinitesimal fragment of the wall.

In fully static liquid, that will be just density times depth times gravitational acceleration. Water, at 1000kg/m^3 times 9.8m/s^2 becomes 98kPa at 10m depth. Add ambient atmospheric pressure (~1bar) if necessary (do you consider empty tank to receive 1bar of pressure on the wall or 0?)

It gets trickier if the liquid is flowing at considerable speed, exerting dynamic pressure, drag due to laminar flow etc. But for mostly static tank, the force is just pressure times unit of surface, and always in normal direction to that surface.

Water exerts pressure on all surfaces in contact. The intensity varies, depends on the depth, the properties of the surrounding medium, and the enclosure of the cavity/reservoir. Also, the externally applied pressure, if any.

0
What is the lifting force of a Helium balloon in air?
4
Perfectly aerodynamic kitchen range hood
4
Determining mass flow rate and exit velocity of compressible flow
5
How can I translate a pressure boundary condition to a velocity boundary condition for incompressible, viscous flow?
1
What's the maximum water jet psi we can create?
1
A sphere of radius R, made from material of specific gravity, SG is submerged in a tank of water
1
How do I calculate the force coming from the centrifugal compressor exhaust?
0
How to calculate the viscous damping coefficient given drag force
0
Calculating Flow rate and Water Velocity of a pipeline