What makes the material travel through Archimedes' Screw?

...or in other words, why doesn't the material just stick to the screw, rotating in place, without progressing along its length?

In the simplest case, the answer is obvious: gravity. If it's a granular or liquid material and the screw is tilted to a side, it will just roll/slide/flow along the blade, to remain on the bottom side of the tube.

But then, Wikipedia says:

A variant of the Archimedes' screw can also be found in some injection molding machines, die casting machines and extrusion of plastics, which employ a screw of decreasing pitch to compress and melt the material. Finally, it is also used in a specific type of positive displacement air compressor: the rotary-screw air compressor. On a much larger scale, Archimedes' screws of decreasing pitch are used for the compaction of waste material.

In such case the forces - pressure, shearing, viscosity, adhesion, all would outweigh gravity, and probably in some cases friction against the tube walls. For example, in injection molding, what is there to keep the half-molten plastic from forming a clumping mass, sticking to the screw and keeping rotating in place without any progress? When the pressure increases, which force prevents the material from backing up into area of lower pressure?

There's actually two kinds of screw conveying: Water lifting with screws happens just as in your gif, in the lower part of an inclined pipe we have water and the screw pushes 'packets' of water upwards. The water can't flow back because there's no path, the blades are not fully submerged. This mode is in principle also possible with solids. 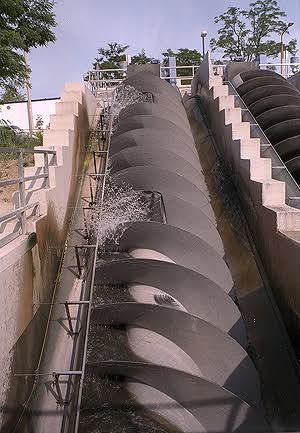 Now, screw conveyors for solids or the screws in extruders and meat grinders or certain dewatering presses work differently: Here it is the friction between the medium and the walls that prevents the material from corotating with the screw. This will be hard or impossible to achieve with low-viscosity liquids like water, as they will flow anywhere. Solids, on the other hand, can be moved in any direction - upward, downward etc.

The ones I've seen that actually cause significant pressure don't have a smooth cylinder wall. The walls have grooves at right angles to the blade passing over them. It's a tradeoff since the grooves also provide a leakage path around the blade. But with a combination of a smooth and minimum-friction blade plus a grooved wall, the thing works. Ideally the walls have maximum friction parallel to the blade and none perpendicular to it.

Apparently we can achieve this well enough that such things actually work. I remember wondering the same thing about my mother's old hand-cranked meat grinder, probably made in Germany in the early 1900s. The blade and walls were made of the same metal, and the blade wasn't particularly polished or anything. The walls did have grooves, which was enough to make the whole thing work. It produced enough pressure to force the meat thru small openings at the end.

This is effectively an addition to other answers:

An original Archimedes screw for liquids does not work as most people imagine it does,
and the diagram does NOT show how an original Archimedes screw works for fluids. The diagram is valid - it's just of something else which works in a similar manner and has become synonymous with the original design in peoples' minds. And both versions do not work as most people imagine them to.

In an original Archimedes Screw the outer cylinder is integral with the "screw" and turns with the screw - there is no moving seal.

When a marble or solid object that cannot fit through the sealing gap is used the two screws work the same. When a fluid is used the difference is important. From the reference below:

The key point is that the "payload" sess a downwards ramp the whole way and simply "runs downhill.

A good illustration of the principle is given on this page
They use tubing so there is no doubt about the "seal".
This image demonstrates what the fluid or other payload "sees". 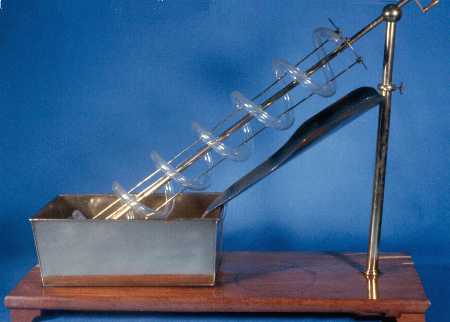 Effectively the fluid sits in "buckets at all times and there is no opportunity to escape.

In typical original style screws the whole outer casing is sealed to the "screw" and the outer casing rotates with the screw. Consideratuiomn of a cross section shows that as with the tubing each batch of water sits in a container and NOT in a sloping tube.

Even in the stationary casing systems mentioned below the payload still usually sits in a "bucket" and runs forever downhill down a ramp as it ascends (!).

The crucial point of the original system is that the screw can be turned at any speed and even stopped and there is no leakage (apart from any that results from poor construction). Here is a "modern" real world device that works in this manner. This allows the device to be turned by hand at slow speed, or rotated intermittently, or with pauses, with no loss of fluid. Modern sealing techniques and relatively fast and consistent speeds of rotation allow systems where the casing is stationary. 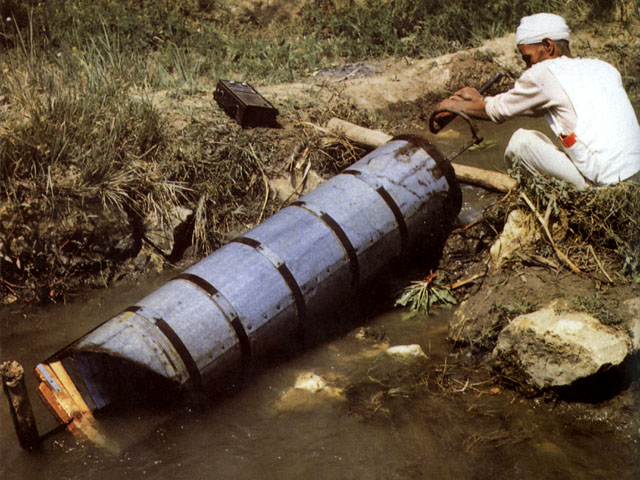 Image from here
From this very good page

The nature of the original design is clearly explained by the Wikipedia - Archimedes Screw page.
While they suggest that whether the inner and outer were sealed in original designs, even a brief consideration of the available facts shows that it was indeed the case. viz

6
What makes something like water so hard to change its density?
4
Finding the velocity of water flowing through a gravel filled pipe
0
How to use the moment-of-momentum equation for water flowing through a pipe?
2
In marker pens, why does the ink travel to the nib?
1
Archimedes screw pump
1
Confusion in the Lagrangian description of Material Surface in Continuum Mechanics