What are the differences between Gauge and Absolute pressure? 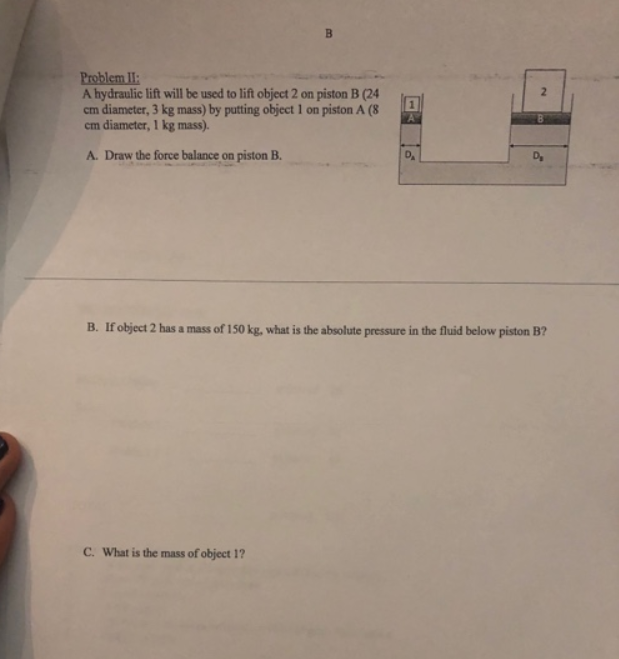 However, the Part B of this problem, confused me on what the absolute pressure under piston B is, which comes from the fact that the system is open on both piston A and B. In this case, is the (Weight of block)/(Area of piston), Gage or Absolute pressure?

Your explanation of the differences between Gauge and Absolute is correct. As you have noted, the difference between them is due to the pressure exerted by the atmosphere.

It doesn't seem that the test creator relies on your ability to differentiate between absolute and relative (or gauge) pressure. It's not mentioned anywhere, other than in B where he wants you to give the absolute pressure, which is impossible to answer, since no ambient pressure is given.

It's not really possible to give an answer at all since the described situation is not static. If the mass is increased to $150\ kg$, it will launch piston 1 rapidly in the air. Furthermore, in a static situation, the pressure below B is/must be the same as below piston A or anywhere else in the fluid. The whole question gives me the idea that the creator of the test doesn't really know what he's talking about.

The absolute pressure doesn't matter anyway, since only relative pressure will be able to do any work. You can mention that the ambient pressure should be given to be able to give an absolute pressure, but in my experience, smartassery is rarely rewarded in school. Although the teacher is just plain wrong here and he should accept his fault...

0
How to calculate temperature rise on AC induction motor in an evaporative cooler centrifugal blower?
3
Working out pressure drop from leak rate
1
Is there a generator that uses night and day this way?
1
What pressure is taken as the pressure of liquid
0
Given a known relation between the saturation pressure and temperature of an unspecified metal, how can we determine the following properties?
1
Is Mostly-Passive Solar Desalination Possible in a Desert Climate?
0
Help needed understanding atmospheric tank vent physics principals