Simple examples to illustrate the utility of the Laplace Transform

I am a math professor teaching an Intro ODEs course, and most of my students are going into engineering. As such, I like to give them lots of examples of how our material is applied.

We are coming up on the Laplace Transform and I'm looking for a relatively simple example from Control Theory. I was thinking of perhaps examining a PID control for the cruise control in a car or for a thermostat (these appear to be the classic examples) but I'm having trouble seeing why we really need the Laplace Transform, or transfer functions, at all: we already know how to solve linear ODEs with constant coefficients without Laplace.

I am hoping someone can show me why we really need (or are at least greatly helped by) the Laplace Transform and transfer functions in these examples, or point me toward a simple example where we do.

For linear systems, we more need derivatives and convolutions than time-variance and multiplication (except for scaling). Therefore, it worths moving to Laplace domain.

$s$ represents frequency as well. The beautiful examples are the initial and final value theorems which show how time and frequency are, in the limit, the inverse of each other

Another useful application of Laplace transform is for the design of high-pass and low-pass filters. They are much more comfortable to work in $s$ domain than messy derivatives.

What's the response (to an arbitrary load) of a viscoelastic assembly consisting of a damper (with damping constant $\eta_1$) connected in series with a spring (with spring constant $k_2$) and another damper ($\eta_2$) that are connected in parallel? 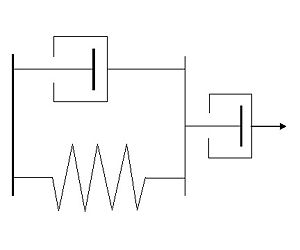 This type of problem arises all the time in the context of automotive engineering, metallurgy, polymer synthesis, and biomechanics, among other fields. But you'll have a tough time writing the response of this and much more complex assemblies if you keep the time derivatives around.

Thus, the transfer function of the assembly is

What happens if I apply a unit step load for 1 second and then let go? We'd write this load as $F(t)=u(t)-u(t-1)$, corresponding to $F(s)=\frac{1}{s}-\frac{\exp(-s)}{s}$ (we can look up these Laplace transforms in a table, for example, or use a symbolic tool such as Wolfram Alpha). The resulting response is

or, graphically (with time in seconds on the x-axis and displacement on the y-axis), 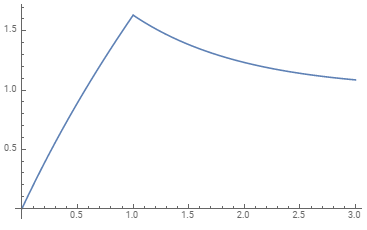 For your approach you need to know the exact ODE of the system. However when designing a controller for a system that can be approximated as LTI you do not necessary need a fully parameterized and identified ODE model. You can either use some PID tuning algorithm or, maybe more related to your question, measure the frequency response function (FRF) of the system. You could fit a transfer function onto this FRF, but the FRF itself is already enough information to design a controller using loopshaping.

14
Modern method for teaching controls
4
How does the DERIVATIVE term slow down the signal?
6
What do the zeros of the transfer function tell you about a system?
8
What do you call the difference between the on and off temperatures in a simple thermostat?
1
Practical examples of LTI transfer function
2
Hilbert transform LTI
4
How to determine the region in a state plane where the equilibrium state is asymptotically stable
0
Choice of transfer function in a system where the controller adapts to give the intended behavior
1
What are the disadvantages of PDDD controller