Why is kVA not the same as kW?

I thought my electric car charging unit uses 6.6 kW of power. However, I found the label and it actually says 6.6 kVA. When I saw this I thought something along the lines of...

Well, $ P=VI $, therefore kVA must be the same thing as kW... strange, I wonder why it's not labelled in kW.

So a quick Google search later, and I found this page, which has a converter that tells me 6.6 kVA is actually just 5.28 kW. The Wikipedia page for watts confirmed what I thought, that a watt is a volt times an ampere.

So what part of all this am I missing, that explains why kVA and kW are not the same?

The problem is that the formula $P=I\ V$ is correct when dealing with DC circuits or with AC circuits where there is no lag between the current and the voltage. When dealing with realistic AC circuits, the power is given by $$ P=I\ V\ \cos(\phi), $$ where $\phi$ is the phase difference between the current and the voltage. The unit kVA is a unit of what is called 'apparent power' whereas W is a unit of 'real power'. Apparent power is the maximum possible power attainable when the current and voltage are in phase and real power is the actual amount of work which can be done with a given circuit.

Both watts and volt-amps come from the same equation, $P=IV$, but the difference is how they're measured.

To get volt-amps, you multiply root mean square (RMS) voltage ($V$) with RMS current ($I$) with no regard for the timing/phasing between them. This is what the wiring and pretty much all electrical/electronic components have to deal with.

To get watts, you multiply instantaneous voltage ($V$) with instantaneous current ($I$) for every sample, then average those results. This is the energy that is actually transferred.

Now to compare the two measurements:

However, if you're NOT dealing with sine waves, the $\cos(\phi)$ relationship no longer applies! So you have to go the long way around and actually do the measurements as described here.

How might that happen? Easy. DC power supplies. They're everywhere, including battery chargers, and the vast majority of them only draw current at the peak of the AC voltage waveform because that's the only time that their filter capacitors are otherwise less than the input voltage. So they draw a big spike of current to recharge the caps, starting just before the voltage peak and ending right at the voltage peak, and then they draw nothing until the next peak.

And of course there's an exception to this rule also, and that is Power Factor Correction (PFC). DC power supplies with PFC are specialized switching power supplies that end up producing more DC voltage than the highest AC peak, and they do it in such a way that their input current follows the input voltage almost exactly. Of course, this is only an approximation, but the goal is to get a close enough match that the $\cos(\phi)$ shortcut becomes acceptably close to accurate, with $\phi \approx 0$. Then, given this high voltage DC, a secondary switching supply produces what is actually required by the circuit being powered.

Another way to understand why kVA is different to kW, is the Power triangle. 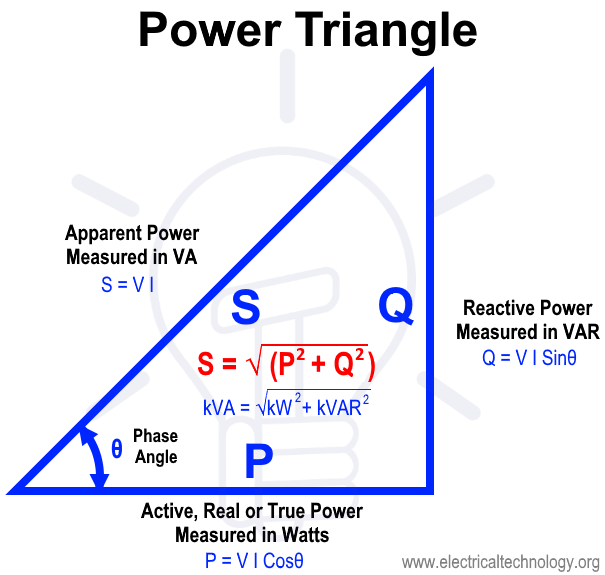 The power triangle shows that the total (apparent) power is the vector sum of the active (or real) power and the reactive power.

Why Apparent and Real power are not the same

When measuring an AC line, you can see, that the maximum values of voltage and current can be reached at the same time or not. See image below:

When the current and the voltage reach the maximum and minimum values at the same time, then the Apparent power (S) and the Real Power (P) are equal. There is no reactive element.

If the current and the voltage do not reach the maximum and minimum values at the same time, then the Apparent power (S) is greater than the Real Power (P). In that case there are some times that the product of $V*I$ is positive and others that it is negative.

In the (ideal) case of sinusoidal waveforms of Voltage and Current, the delay between voltage and current when expressed in the angular quantity $\phi$, also determines the Power factor (which is $\cos(\phi)$).

9
What type of ultrasonic transducer would be suitable for ultrasonic welding?

5
Why Ceramic Capacitors Are Not Rated Directly Like Electrolytic Ones?
5
Why is capacitor 2 not grounded on this board?
1
Why do domestic electric oven do not use thermal insulation?
0
Why ESD does not affect pacemaker?
1
Why are the synchronous reluctance motors not self-starting?
1
DC motor as generator - some questions
0
Why not bury electrical cables when laying road?
1
Why do identical-looking power plugs randomly not fit in some sockets in the same power strip?