I'm quite curious about the 3-ring release system used in parachutes, as described in this Wikipedia article:

I wonder why is this system so popular? I've been told it's nearly ubiquitous in the industry, but even after Googling and asking some skydivers I haven't been able to find out what makes it better.

More specifically, the Wikipedia article mentions that each of the loops multiply the mechanical advantage of the small cord loop that is secured by the yellow wire. Could somebody describe in detail how this multiplication of mechanical advantage takes place, and why is the number of ring chosen to be 3 instead of say, 5?

As noted by fred_dot_u, each ring acts as a "Class 2 Lever". Imagine you are trying to lift the orange beam shown below from a position close to the pivot (distance y). The force somebody else would need to apply at the far end (distance x) would be smaller, by a factor of X/Y 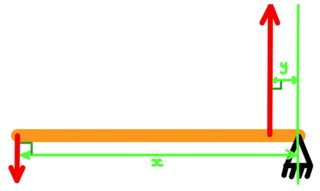 Imagine now than instead of applying your force directly upwards, you instead chose to apply it at a shallow angle. You can see that the perpendicular distance to the pivot is reduced, despite the force being applied at the same point on the beam. If your applied force (bodyweight in the case of the parachute) remains constant, then the reaction required to stop the beam moving is now even lower.

The way the Three-Ring-Release works, is by linking two of these systems together. It's difficult to show on a 'classical diagram', due to the way the fabric wraps around to form the fulcrum in each lever.

I hope the image below illustrates how the reaction force required on the small fabric loop (bottom left arrow) is many times smaller than the force applied by the weight of the human (far right arrow).

It is critical to minimize this reaction force, since if it were too large, then the friction force against the 'pull cord' (yellow in your original .gif) would be too big, and it would become difficult to remove the cord and release the parachute.

I hope this answers your question, and explains how the mechanical advantage comes about. As for "why 3, and not 5"? This comes down simply to the fact that three is enough. 5 would simply increase cost and complexity to manufacture the mechanism, as well as adding more points of failure, and 2 would not reduce the force sufficiently.

N.B. There is no "pulley action" going on - the mechanical advantage is merely to reduce this frictional force and ensure that the yellow cord can be removed easily, regardless of how heavy the human is.

I can't address all the questions you've posed, but at least one of the answers comes directly from the inventor, Bill Booth, as noted in the wiki. He holds the patent for the device (held?) and I had the opportunity to fly with him a couple of decades ago.

All of the following is word of mouth. Perhaps there is documentation to back it up, but I heard it from Bill and that's good enough for me. I did see the patent documentation in his office, but that was before digital cameras and camera phones.

It was explained to me that prior to the 3-ring release, the mechanism most commonly used was called a Capewell release. As he tells it, the mechanism is prone to jamming and is particularly difficult to release when under load, as would be the case when plummeting to earth with a fouled parachute.

The current configuration, again as described by Bill Booth, is that there is a ten to one reduction of force for each ring. If one ignores the friction of the cable at the ring lock loop, the total reduction is one thousand to one over the three rings. That means you can hang one thousand pounds from each release (two per canopy) and the force required to break the locking cable free, perpendicular from the attachment point, is one pound. I don't know newtons so well.

Adding in the laterally oriented securing mechanism of the cable, the force required by the parachutist is even less. If there is one pound of force pulling against the cable at the loop that secures it, how much force is required to slide that cable out and free up the assembly? I don't know that answer, but it's bound to be very low.

I've experimented with this concept for a payload release mechanism for a multi-rotor radio controlled helicopter. Using the math of ordinary levers, I had a slightly less than 5000 to 1 reduction in force, using rigid linkage rather than loops to retain the levers. The components were necessarily light, and would tolerate up to 2 pounds payload, perhaps more, but the copter was too sluggish at that point. The linkage components weighed 20 grams. 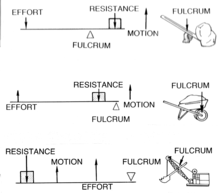 The image above comes from a wiki entry regarding levers. The 3-ring release is a class 2 lever, pivoted at one end. Referencing the animation in the wiki, the first lever load is the large ring from which the 'chutist is suspended. It applies force to the second ring upwards (relative to the animation) of the pivot of the second ring.

The second ring is latched by the third ring, applying force to the third ring in the same manner. The mechanical advantage from which the lever's math comes into play is due to the spacing of the pivot relative to the next ring's location.

The "shot and a half" required moving a cover to access the release mechanism. "One shots" released by just moving the cover.

0
How would I most easily create a mechanical intervalometer for a digital camera?
0
what subject in Mechanical engineering deals with the making of External cases for electronic gadgets?
0
What is the name and purpose of this Instrumentation / Mechanical fitting
0
worm gear linear motion with release mechanism
0
compute the maximum resisting torque that can be overcome by the system at the shaft axis
2
What is this mechanical pump called?