Dynamic Mechanical Analysis, otherwise known as DMA, is a technique where a small deformation is applied to a sample in a cyclic manner. This allows the materials response to stress, temperature, frequency and other values to be studied.

DMA works by applying a sinusoidal deformation to a sample of known geometry. The sample can be subjected by a controlled stress or a controlled strain. For a known stress, the sample will then deform a certain amount. In DMA this is done sinusoidally. How much it deforms is related to its stiffness. A force motor is used to generate the sinusoidal wave and this is transmitted to the sample via a drive shaft.

Modulus values change with temperature and transitions in materials can be seen as changes in the E’ (elastic modulus) or tan delta curves (tan delta = elastic modulus / loss modulus). This includes not only the glass transition and the melt, but also other transitions that occur in the glassy or rubbery plateau. The glass transition (Tg) is seen as a large drop (a decade or more) in the storage modulus when viewed on a log scale against a linear temperature scale. A concurrent peak in the tan delta is also seen. The value reported as the Tg varies with industry with the onset of the E’ drop, the peak of the tan delta, and the peak of the E’ curve being the most commonly used. This is a typical output from a DMA scan in temperature with a ramp rate near 5 °C:

The image below shows the results from a DMA scan. In black there is the elastic modulus, in gray the loss modulus and in brown the tangent delta or damping. What is the meaning of the two tangent delta peaks? 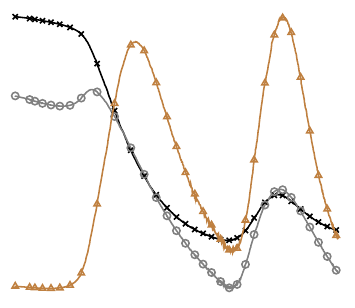 Is the material changing its property during the DMA scan? The x-axis is temperature, while modulus and tangent delta have different units on the y-axis. And what is the meaning of the increasing elastic modulus?

If you find two peaks in the E" chart it usually indicates that this material has two Tg's which can occur if the material a blend or a block co-polymer.

For rubbery material the E can rise slightly in the rubbery region with respect to Temp.

Did you ever figure this out?

Not the answer you're looking for? Browse other questions tagged materials or ask your own question.