Are the points of inflection and contraflexure the same?

In theory of bending of beams, often these terms are used. There are no clear definition present. Most of them contradicting. Which of the property(bending moment and shear force) is zero in which case?

The definition of contraflexure is defined as the point of zero bending moment. Then why have another term, i.e inflection point?

NOTE:The wikipedia link has no references.

A point of inflection is defined as the point where a function changes from convex to concave or vice versa.

For a function $f(x)$, this is frequently mathematically defined as the point where $f''(x) = 0$, since $f''(x)$ describes $f(x)$'s curvature[1]. Being more pedantic about it, this is a necessary but not sufficient condition: a function might have no curvature $\left(f''(x) = 0\right)$ but not actually change between convex and concave (this is strictly called an undulation point). That being said, in common parlance any point which satisfies $f''(x) = 0$ is considered an inflection point.

Note that the above has nothing to do with bending moment, it is a characteristic of any mathematical function.

Contraflexure, on the other hand, is as you've said: the point where a beam suffers no bending moment.

For example, here's the bending moment of a cantilever beam with a linear load which generates a point of contraflexure and a point of inflection (notice that to the left of the point, the curve has negative curvature, and to the right of the point, it has positive curvature). The point of contraflexure is easily identifiable on a diagram (it's where the bending moment diagram equals zero). The point of inflection is harder to identify precisely; you can quickly tell that there is a point of inflection and that is it "around here", but you can't easily point to its exact location (without doing the math, I can tell it's somewhere in the circled region).

However, when speaking of beams, it is possible to state that the point of contraflexure is the same as the point of inflection. However, one will actually be talking about two different things at the same time.

This only works in cases where $f'(x)$ is continuous. This is because for a point to serve as an inflection point for $f(x)$, there must be a single valid tangent at that point. So if the derivative is continuous, that condition is met even if $f''(x)$ (the curvature) is discontinuous).

[2] The exception described above in [1] applies to beams. If a beam suffers a concentrated bending moment, that leads to a discontinuous bending (or curvature) diagram, but the deflection's derivative (tangent angle diagram) will still be continuous. So if that concentrated bending moment leads to a change in the bending diagram's sign at that point, then that will be an inflection point in the beam's deflection. 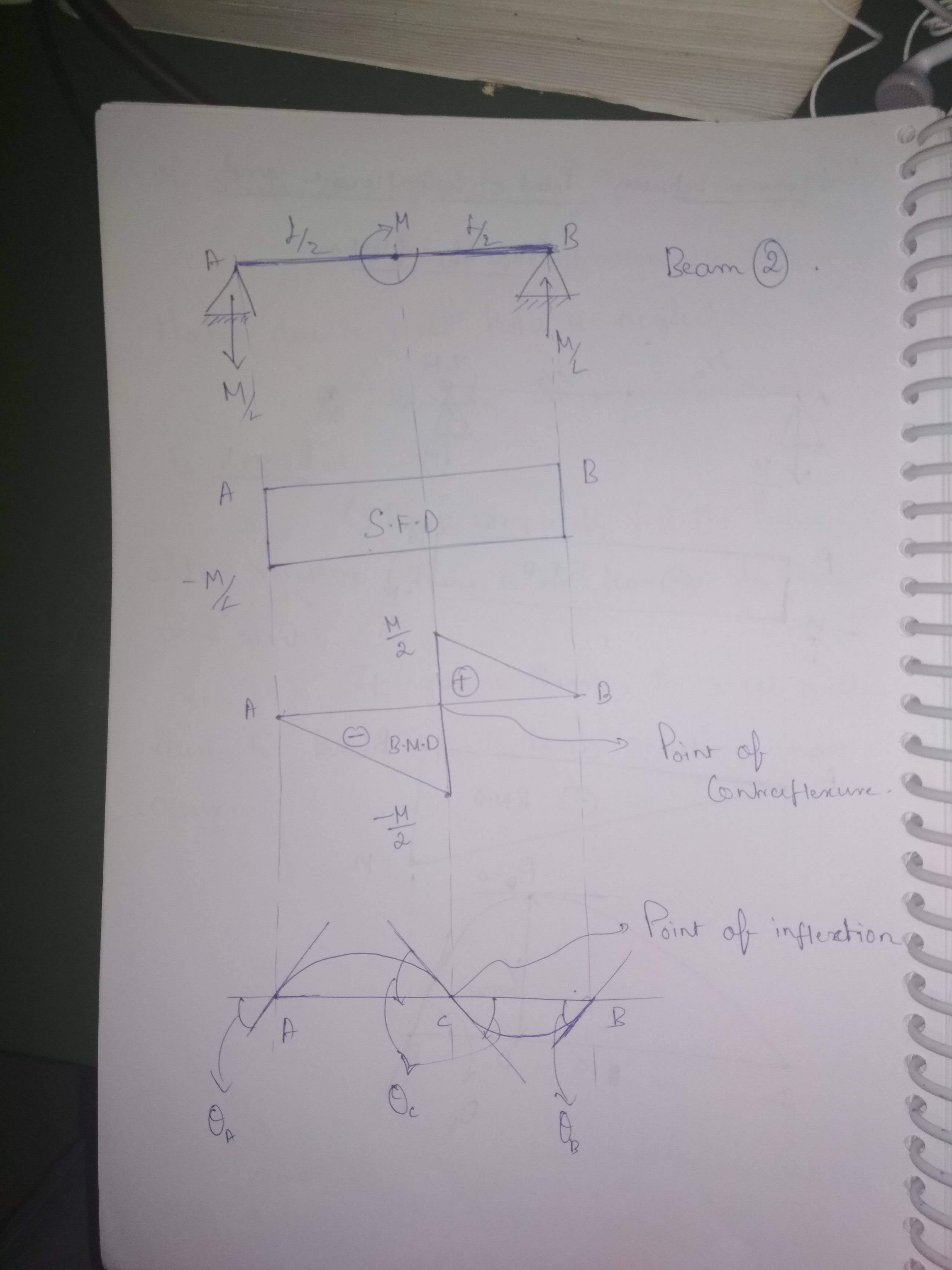 3
Sum up the loads at same position on a deflected beam
2
How to describe the rotation of opposite ends of a body due to an applied moment
0
How are the location of Gausian points determined in Finite element theory?
9
Definition of buckling as a sudden deformation
1
How to check if bending moment diagram is correctly drawn
1
Comparison of Shear Stress obtained from thin-walled beam theory and Timoshenko beam theory
1
Maximum Stress and Deflection of Rectangular Plates Under Hydrostatic Load - Tall Plates
0
Mechanics of Materials of Flexible Shaft