I would like to have a 3d simulation of a helicopter landing on a ship.

I thought about using matlab for this, as a far as I know you can connect models from Simulink to virtual worlds using blocks, which is the main feature of the Simulink 3D Animation toolkit (https://es.mathworks.com/products/3d-animation/features.html). You can even edit 3D objects, or you can import it from CAD packages. My main question is the following, where do I define the dynamics equations of the helicopter? I haven't really worked with CAD software neither animation, so I don't know how to do this. I'm not even sure if this is the right way to do it but it should look like this.

As I said my main problem is the animation. If it wasn't for this, I could just create a model of the helicopter in simulink blocks and another model of the controller in simulink, connect them together, play it and see the plots of the desired tracking variables. But I want to do a 3D animation of the tracking of the reference.

I attach a photo of the helicopter dynamics to make myself clear. 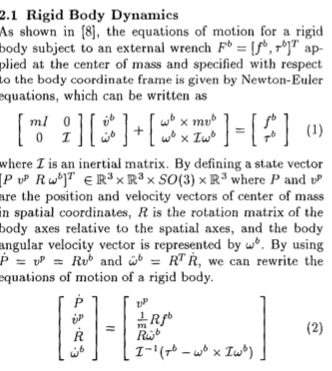 You can use FlightGear as your image generation (animation) software. What you have to do is:

You can replace FlightGear with any other tool that you might find. It is mentioned for availability, being free and open source and it has lots of documentation and tutorials.

Your code can be in any language that you are comfortable with: Python, Matlab, C, C++, Java, Assembly, etc.

If you are a bit familiar with python programming language, this can be a streamline solution:

3) Import them to 3D scene, scale and set zero positions and orientation.

5) Call this function from 3D engine cycle loop to manipulate (and read from) scene objects. Engine loop calculates dt for every frame that leads to smooth real-looking sumulation.

This is more an answer to your problem, than the actual question.

When in the world of professional and commercial CAE (where Simulink is), the natural way to implement the controller for the helicopter would be software like Simulink, or Activate, or similar. This is a strong indication if the controller is complex, most often if you develop a commercial grade controller. The natural way to simulate the helicopter is an MBD (multi-body-dynamics) software. It usually comes with prostprocessing software, that allows you to plot any values or render a 3d animation. This is a strong indication if you develop a helicopter, that you turned into a prototype and that should actually fly at some point. MotionView/MotionSolve, ADAMS, RecurDyn, Simpack, ...

FEM can back the MBD model with elastic bodies. If the helicopter is not an RC type, then you probably want the rotor blades modeled like this.

If one of the two is a simplyfied model, you can do it in the other software. This is like trying to do the helicopter in Simulink. But, the same can be done the other way round. The helicopter model in MBD could contain some differential equations for the controller.

Industries use both at the same time. MBD and controls can be connected via: a) Cosimulation, where at finite time steps, values are passed between the models. When designing controllers, this is not so wrong, because digital controllers also have to work at finite time steps. b) FMU's can be used to intergrate one model in the other. The FMU implements only the equations, the software of the other part integrates/solves these. For example: You use MBD to simulate the helicopter and choose this as host. You export the FMU of the controller from the controls software and import it in the mbd software. The mbd software will solve the equations of the controller along with the equations of the mbd-model. This will prevent the solvers from interchanging values at time steps or use values from last time step.

Using professional software might take away some of the thrill of developing it on your own, but if you're after that, you should probably choose the python approach, that Alexander proposed. I am not sure how much simulink would be adding to that, if you're in a educational situation.

0
I need some help with 'pattern mirror' tool in Solidworks
4
Looking for advice on design of some rollers
4
what's wrong with this robust control scheme?
2
Closed loop guidance and control: how to tune a system with multiple feedback controllers?
1
How to reduce oscillations (rapid changes of control signal) when controlling a real system, which occur due to noise in measurement from sensors?
2
Help understanding a control system represented by coefficients of theta?
1
Control System Response