Purpose of spheres and fins on submarine propeller

On a recently launched Russian diesel-electric submarine, the rear propeller has two distinct features. You can see spheres at the base of every propeller blade: 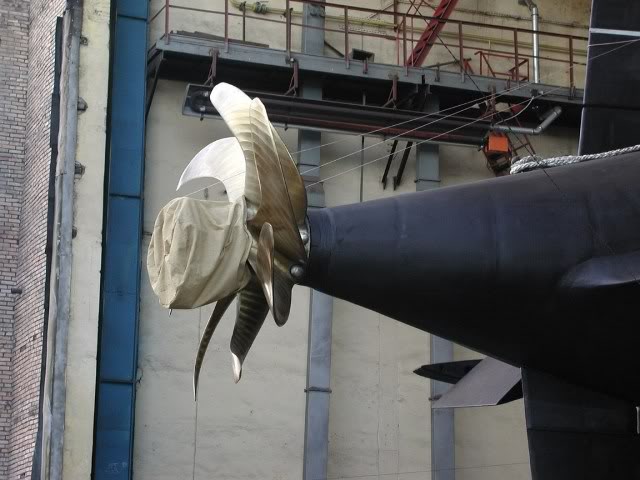 Also, the trailing edge of the shaft has four adjoining fins in line with the axis of rotation: 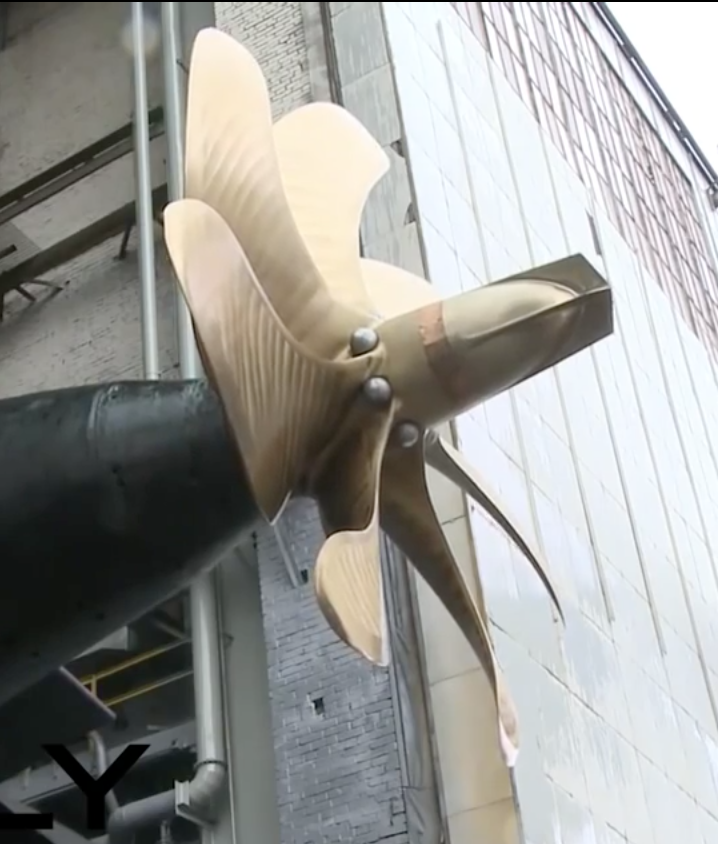 Most importantly, what is the purpose and function of the spheres, and what's beneath the veil in the first image? I believe that it may differ from the second image.

It's made of a different material, so possibly a sacrificial element.

Is it to reduce noise? Is it to smooth flow or prevent cavitation?

In the video you've linked to, the spheres are seen on both the leading and trailing edges of the propeller: 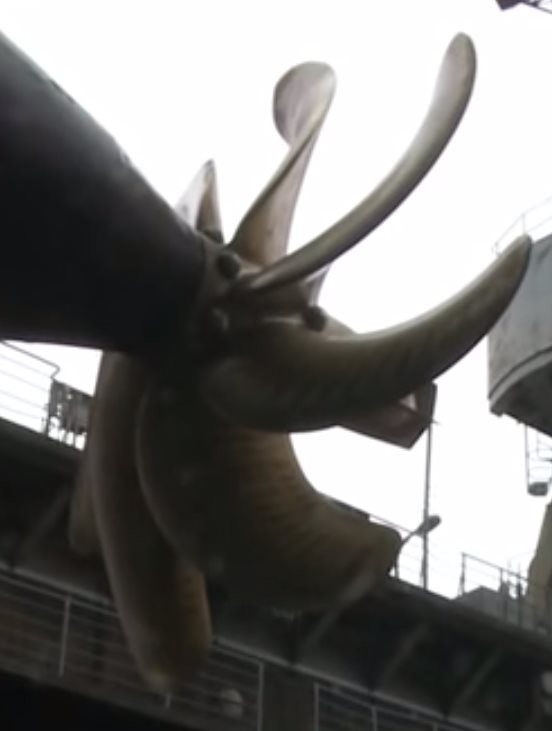 I expect they are intentional - there are a number of ways to attach a propeller without having to disturb that surface, or using flush caps.

Cavitation is caused by a drop in pressure. This would be seen on the trailing edges of the propeller, and is worse on the outer edge of the propeller which is moving faster through water than the inner area. I doubt these spheres have any effect on cavitation at all.

It is either a sensor system, or noise reduction. If sensors, it's possible that these could be used as a rearward doppler array, even on a moving propeller, though this seems unlikely.

Another possibility is that these are caps that are covering something else, and are removed (manually or merely fall off by using the propeller in water) prior to active duty. They may be hiding parts of the propeller design not intended to be public. Given that they are made of a distinctly different material or coated differently in some photographs, this might be the case.

Lastly, they might be there simply to throw off competitors and are red herrings.

Unfortunately the secretive nature of stealth submarine technology means we may not be able to definitively prove any of these hypothesis.

When fluid flow increases in velocity (because of smaller area of blade root) the pressure decreases and can be low enough to produce cavitation. The spheres produce turbulence changing the flow characteristics, keeping the pressure up. Hub tip pressure drops as flow fills in after the hub and causes cavitation. The flat hub blades disrupt the flow and keep pressure up. Several designs are used in both commercial and military applications. Search Google for propeller cavitation images for good diagrams.

Submarine propulsor designers are least concerned about hub vortex cavitation as they are primarily concerned about cavitation inception, or the onset of cavitation, which first occurs in the tip vortex regions, where the velocities are highest. Once cavitation occurs you are no longer operating in stealth mode. However, the hub vortex does waste a significant amount of energy.

Therefore, the fins looks to me to be a kind of hub stator used for diffusing the hub vortex and thereby increasing propulsor efficiency. Take a look at this article in maritime propulsion. I would guess the covered picture could be some kind of propeller boss cap fin system which would even be more effective in improving propulsive efficiency.

The spheres you refer to are a bit of a mystery to me. They would create horseshoe vortices and convect momentum downward into the hub vortex region, which would slightly increase the pressure in the in hub vortex wake and help to alleviate flow separation when the hub sharply ends. However, it wouldn't seem to me this was their ultimate purpose, as generating secondary flows are not usually desirable unless there is another advantageous purpose.

Given that there has been quite a bit of research the past 10-15 years in drag reduction by polymer or microbubble injection, I would expect a state-of-the-art submarine to be employ such a system. See for example this paper by Nouri and Sarreshtehdari specifically about microbubble injection to reduce drag in the hub vortex. They are optimally placed for feeding into the hub vortex.

The props are on different subs. A transition piece covers the gap between the after hull and propeller. In the first pic it is almost cylindrical, the second decidedly conical. The russians backfit the second pic hub designs to several older class designs, even the tandem 4-blade props on the Victor class. Also seen in some Chinese subs.
Longer hub taper produces more gradual flow so in itself reduces cavitation onset. The blades appear welded to hub. Relatively cheap fix compared to some designs.

This diagram illustrates cavitation locations. http://www.boatdesign.net/forums/attachments/props/37159d1257771030-prop-doing-bad-cav_varie.jpg The covered prop may look like this: https://d2t1xqejof9utc.cloudfront.net/screenshots/pics/0a97825d2248893edcf274662567b552/medium.JPG The fins are integral to the hub/spinner and turn with the prop. The pitch is less than the blade root.

Not the answer you're looking for? Browse other questions tagged mechanical-engineering fluid-mechanics propulsion marine-engineering naval-engineering or ask your own question.

3
X-form and cross-form rudders in underwater control
5
Why don't propeller designers use multiple profiles?
0
Is there an ideal propeller shape?
1
Sea waves: Having trouble visualizing the difference between group celerity and celerity
1
Auxiliary engines on cargo vessels, what types are used for what purpose?
0
How to calculate the moment of inertia of a propeller