Can the structural integrity of bridges be measured in real-time for safety?

As a follow up to this question, I wonder if structural integrity monitoring information can be provided real-time and to a sufficient degree that safety decisions can realistically be made from the information.

To put things in context, in the USA and other parts of the world federal, state, and local governments regularly receive structural integrity reports on infrastructure, including bridges. These reports are the results of assessments that are performed on a scheduled basis, and it can be many months or possibly years between assessments.

Bridges are an important part of federal, state, and local government economy since they provide critical infrastructure. It is also important to protect historical land marks such as the Golden Gate Bridge. 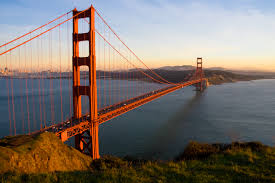 Golden Gate Bridge, an iconic bridge in the United States

And the consequences of insufficient information can be quite severe. For example, in August of 2007 the I-35W Mississippi River bridge collapsed, which resulted in the loss of many lives. 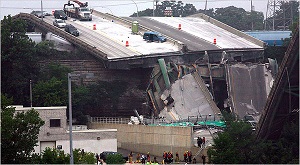 I-35W after the collapse

There are many different sensors that can be placed on a bridge to help monitor its condition. After the I-35 bridge collapse, this area has seen a lot of publicity. Most of these sensors were previously available, but the need wasn't as apparent to the public.

These sensors can be wired or wireless. Some are even powered by the vibrations from the passing vehicles.

Cost is a major factor in considering a bridge monitoring system. Even if the initial cost seems reasonable:

The sensors are small, wireless, rugged, and require practically no maintenance, he says. They are expected to last more than a decade, with each costing about \$20. An average-sized highway bridge would need about 500 sensors for a total cost of about \$10,000.

This doesn't account for the cost of continued monitoring of the sensors. Real-time monitoring is expensive and even less than real-time monitoring imposes a constant drain on Department of Transportation budgets that are already stretched too thin. If there was more money in the budget, the bridges would be in better condition.

These bridges are already inspected regularly by trained inspectors that climb all over the structure. This was done on the I-35 bridge and it still collapsed.

The cost and complexity of the systems mean that only a few very large structures would be fully monitored. The cost of these systems is likely more than the amount listed above. The value above is also just the cost of the individual sensors. A full study of the bridge would have to be done to insure that the sensors are placed in the locations where they would be most useful.

Each sensor measures only a single data point. There would have to be a lot of thought and research to determine which sensors are the most beneficial.

Even after the sensors are placed, a comprehensive criteria would have to be in place so that the people monitoring the sensor results would know what constitutes a warning. There might be many false positives and maybe even false negatives.

As an article points out:

Even if all of these sensors were in place on the I-35 bridge and monitored in real-time, the actual collapse happened so fast that traffic would not have been able to be stopped in time. The only difference would be that there would have been a lot more information for the investigators to go through.

Think of a plane's Black Box, but for a bridge.

Real-time monitoring can be done and has already been done. The technology is there and as pointed out by hazzey, is a matter of cost versus the risk involved.

As a practising Engineer, I am/was involved in two deep excavation projects in two different countries where a cut-and-cover tunnel is/was constructed right under a major highway bridge. In both cases, traffic closure or diversion is not an option. The Building Authorities in both projects requested for real-time structural health monitoring as the consequences of a mishap can be catastrophic.

In both projects, an array of optical prisms together with robotic total stations are deployed to monitor bridge pier movements. The total stations are networked to a server where data is being uploaded continuously. The server itself is connected to the internet, where parties involved can download the data and process the information. In addition, some systems can generate SMS alerts in case where a predetermined level is breached.

Before any monitoring is done, an impact/damage assessment has to be carried out to determine:

This is followed by a condition survey to assess the current state of health of the bridge. It usually includes visual inspection for cracks and measurements on bridge bearing movements.

Reinforced concrete and steel bridges, under normal circumstances, do not require real-time monitoring as they do not fail suddenly. Bridges that have been properly designed tend to fail in serviceability before they fail structurally, giving sufficient warning before they collapse. Also, regular inspection and maintenance of the bridges help to ensure that the bridges remain serviceable.

Structural monitoring with sensors is indeed possible. The issues are the cost of monitoring, and which parts can actually be monitored.

The more critical a bridge is, the more likely it is to be worth paying the cost of monitoring (criticalness being mainly due to number of vehicles crossing per day, but also the availability of alternate routes and the length of it (i.e. number of vehicles which may be on it during collapse) play a part). A major bridge built these days is likely to have some sort of monitoring built into it, as noted in the article you linked, and an example of which is the Forth Replacement Crossing (now called the Queensferry Crossing). Some bridges have had systems retrofitted, such as the existing Forth Road Bridge, which has acoustic monitoring to listen for cables snapping.

Existing bridges are most likely to be fitted with monitoring if an assessment shows that there is cause for concern. If a bridge assessment finds that part of the bridge is deteriorating, it may recommend more frequent inspections, or the installation of monitoring. Because of the cost of monitoring, this is likely to only happen on major bridges.

So, could monitoring have prevented the I35-W collapse?

Firstly: I35-W, although not a small bridge, was not on the same scale as the Golden Gate Bridge or the Forth bridges. Monitoring was hence only likely to be installed if the bridge had been identified as deficient. And that hadn't happened because the routine bridge inspections and assessments had failed to notice that a small connecting plate was undersized. Your link to sensors seems to suggest that new cheaper sensors may now be available. I still can't see the cost as being affordable given the shear number of bridges which each authority has control over, but maybe over a long period (say 50 years as the budget might stretch to 2% of an authority's bridges per year - numbers plucked completely out of the air by me) it could happen.

Secondly: I don't believe most monitoring is realtime. Although I'm sure monitoring systems have automatic alarms that go off if significant movement occurs, I struggle to believe that someone would have a particularly fast response to it. More than likely, a system alarm would result in someone going to have a look, maybe the same day maybe not. Mainly the systems are there to look at long term issues. Taking the Forth Road Bridge as an example - the acoustic monitoring is there to record the "ping" from a cable strand snapping. There are a few thousand individual strands making up the suspension cables. The acoustic monitoring is there so that someone can look at the results and say "it looks like 63 have snapped in the past six months, maybe we should think about doing something to reduce the load". I don't think it's really there with the expectation that it will record 100 snapping in a day, resulting in the bridge being instantaneously closed. (The Forth Road Bridge closes due to high wind a few times a year - they have a proper system in place to close it).

Thirdly: the official report into the collapse suggests that the failure was very sudden: there was maybe 10 seconds warning. Even with realtime monitoring, you need to a) receive results, b) determine that they're catastrophically bad (easy if you have the 100 pings in my Forth example, difficult if you have accelerometers as per your link, which might be telling you that the bridge moved 0.05 degrees) and c) get the police out there to close the bridge. Total time estimation: 10minutes if you're very lucky. Not 10 seconds. (And probably more like 3 months if you set up the monitoring for long term effects and weren't sure whether the 0.05 degrees was significant or not, because the system wasn't set up for that.)

Disclaimer - I've tried to put in facts and references where I can, but the actual conclusions I've come to are heavily based on my opinions and are not straight facts.

15
How should the public raise questions about unsafe structures in the United States?
13
I have inherited a product with inconsistent designs sharing the same part number. What do I do?
5
Seeing through walls and noninvasive structural integrity metrics
4
What is a good sensing element to monitor corrosion in a bridge structural health monitoring system?

6
What is the process for qualifying a weld between structural steel and stainless steel?
2
What is the preferred composition for modern concrete bridges?
3
Definition of stiffness for structural dynamics: How would you find the stiffness of an unusual beam directly?
4
can a new foundation be dug alongside an existing house with a deep foundation without compromising the structural integrity of the existing house?
2
How can the shear capacity of a concrete slab be determined for effective depths under 200mm? [Eurocodes]
2
Why conduct experiment for load distribution within three triangulated structural frameworks when you can calculate theoretically
3
What can a licensed Mechanical Engineer do in the civil/structural field?
0
What material can be used as a structural component for heat insulation and can sustain loads of 10-20 kg?