The normal space elevator (that reaches from the Earth's surface to a counterweight beyond geostationary) needs a material that's strength/weight ratio is better than any material we have available.

I've another idea, that I assume isn't possible either, but I'd like to know what makes it impossible?...

What if, rather than starting the tether from the Earth's surface, it starts from 2000km above the Earth? This will massively reduce the necessary strength/weight ratio of the material. Not only is the part closest to Earth experiencing the greatest gravitational force (per unit mass) but there's a sort of vicious circle: To add a metre to the length of the tether we need to strengthen the whole tether (above this new segment), which means making it heavier, which means making it stronger, and heavier, etc.

I found, using the numbers for Zylon, it works.

This elevator, unlike a real space elevator is in 'proper orbit', or at least it is, on average. The part that hangs towards the Earth will be suborbital (indeed will be going quite slowly relative to low-earth orbit), while the part that extends beyond geostationary will be at superorbital speed. It is in orbit.

Going up into space is easy, getting into orbit is the expensive bit. A rockoon might be a neat way to get to the 2000km mark with a very modest rocket (the rocket equation means that we can use a very small rocket to get to 2000km, compared to the rocket required to get to 2000km orbit) - about 3kg of propellant per kg of payload, I think.

"But won’t you pull the whole thing down as you climb it?"

Yes. To correct for this, ion-engines will be arranged on the tether for station-keeping. Some of the payload can be used for refuelling these (they have a specific impulse 10 times better than a rocket launcher, and the rocket equation helps here, so hopefully we’ll need far less fuel!)

I wrote a python script with a few assumptions (that it's 'suspended' from something geostationary, so it has a length of 27415km), it ends 2000km above the Earth's surface. It has a tensile strength of 5.8GPa and density of 1.54 g/cm^3 (Zylon). It can hold a 400kg payload at the bottom of the tether. I found it needed to have a total weight of 2100 tonnes and a maximum diameter of 10.4mm. 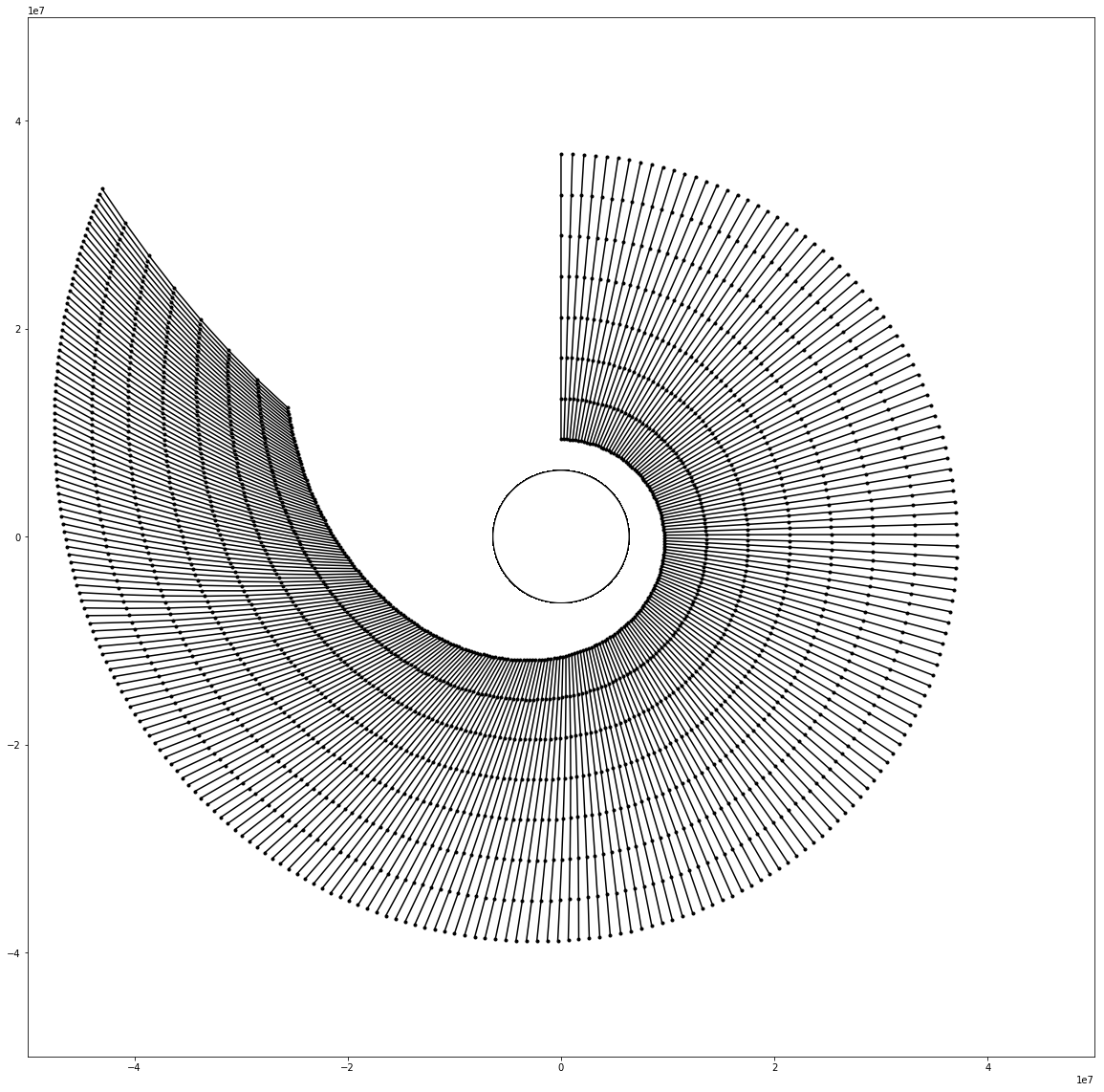 caption: simulated space elevator - plotted every two minutes. Not sufficiently high to be geostationary, and I suspect either the initial conditions or modelling errors mean that it failed to remain orbital!

Does this work? I've modelled a simple 7-segment tether, but I need to tweak the initial conditions a little to get it into a good orbit. I worry that something weird happens with orbital mechanics that means this isn't going to be a stable object? Can a tether stay 'vertical' without too much station keeping?

If it does work, it's neat, as it'll take less than 100 flights of the falcon heavy to get it up there, and after than geostationary orbit will be cheap :)

Code for the model and mass calculations.

To look at @kamran's point that "The system is...doomed to...pull the higher eleveation parts into lower/ heavier orbits and crash eventually." It does seem it's inherently overly sensitive to initial conditions, if it is slightly too low, then the gravitational force on it scales much quicker than it would if the object were a point mass. I wonder if this can be mitigated by shortening the tether: The centre of such a contraction would be the centre-of-mass, thus it would 'pull up' the centre-of-gravity out of the gravity well a little. Maybe this would be the mechanism to control this effect? But it does feel like it's not in a stable state and will require active control. See 'fall-to-earth' scenario below! 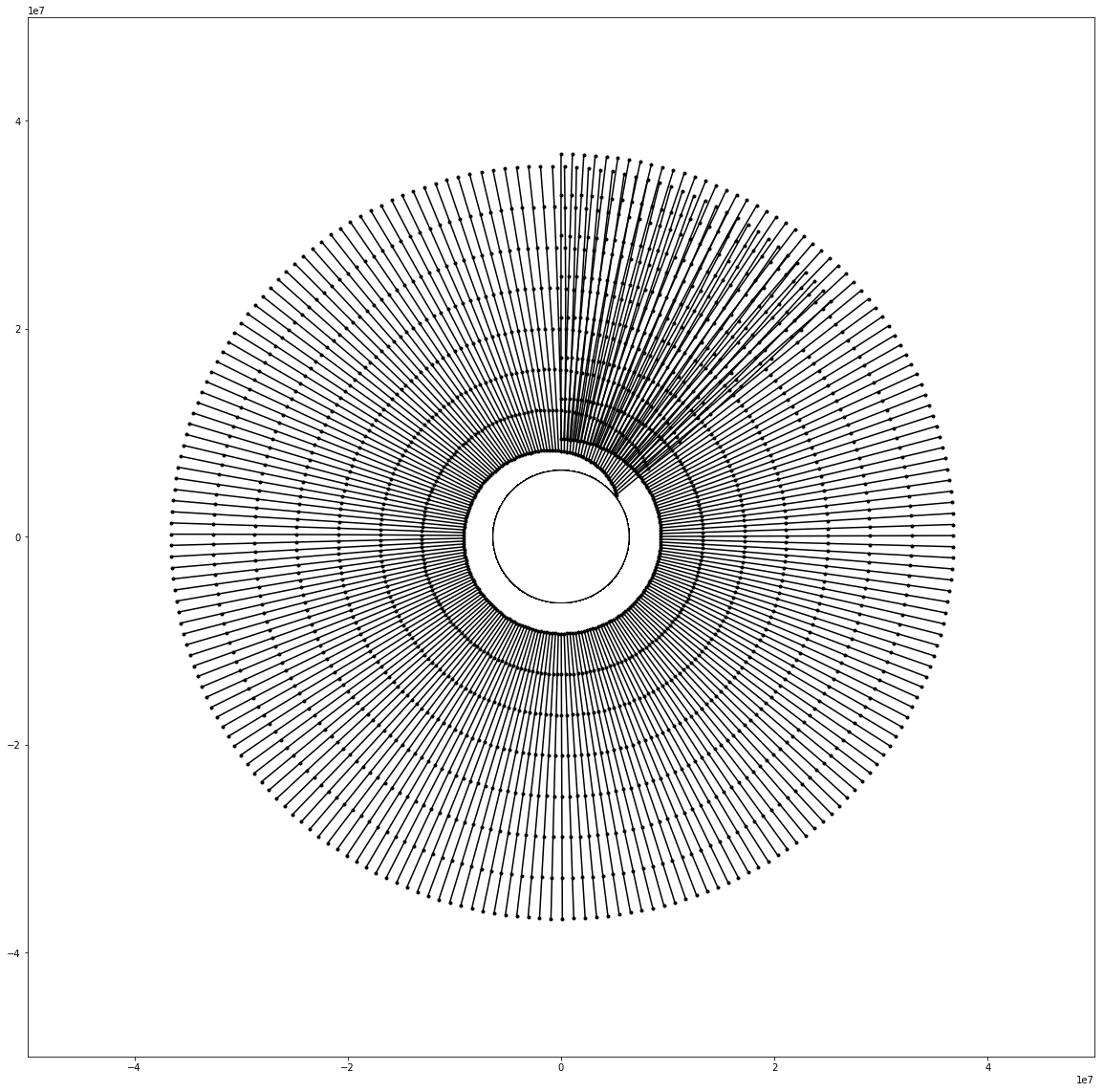 I can see the image: A long thin cable arced in a sharp slant backwards, strained by the huge forces of orbital velocity trying to tear it apart and cut it to free orbiting segments.

Also what is there to balance a possible whiplash effect which could possibly run up and down the length of cable and wind the whole system into a violant dance like a wounded snake?

What is the balancing force keeping the end at approximately 2000 kilometers?

What about tidal effects? This is a classical case of effects of moon's gravity working with different intensity on higher and lower parts of the cable twice daily!

The system is inherently imbalances and doomed to coil down and pull the higher eleveation parts into lower/ heavier orbits and crash eventually.

Yes it is coceivebale to have counter balance boosters and rockets to try to maintain the geometry of the system, but most likely whith anacceptable expenses and logistics!

Not the answer you're looking for? Browse other questions tagged aerospace-engineering dynamics stresses modeling strength or ask your own question.

4
What is the strongest known *metallic* material which can be used on Earth?

5
Dynamic mass balance in plug flow reactor
5
Normalization and Non-Dimensionalization of a mass balance equation
0
Magnetic Entrapped Storage at 0 gravity
1
Why do we get singularities in a solutions while modelling a physical systems?
0
Artificial gravity with accelerating elevators enclosed in a gigantic sphere
1
How much energy do mass drivers need to project 1lb of material 1km/second
0
Coulomb damping time calculation
0
Unstable System. Error Trying to model the Red Bull Stratosphere Free Fall