For an experiment, I have a diesel generator that releases hot flue gases at 150-160 Degree Celcius.

I want the output gas to be at less than 75 degrees for a duration of ~ 1 hour without 'circulating' water. I'd like to do this with static water tank/bath (because 1 hr is usually the maximum time of operation at once for a generator.)

-The location I am in is where ambient temperature is ~ 18-30 degree celcius. -Exhaust diameter is 4 inches

I want to be able to design a kind of heat exchanger:

What's the best direction/references/designs to look into for design such, water bath/non-circulating type heat exchangers?

My experiment till now. 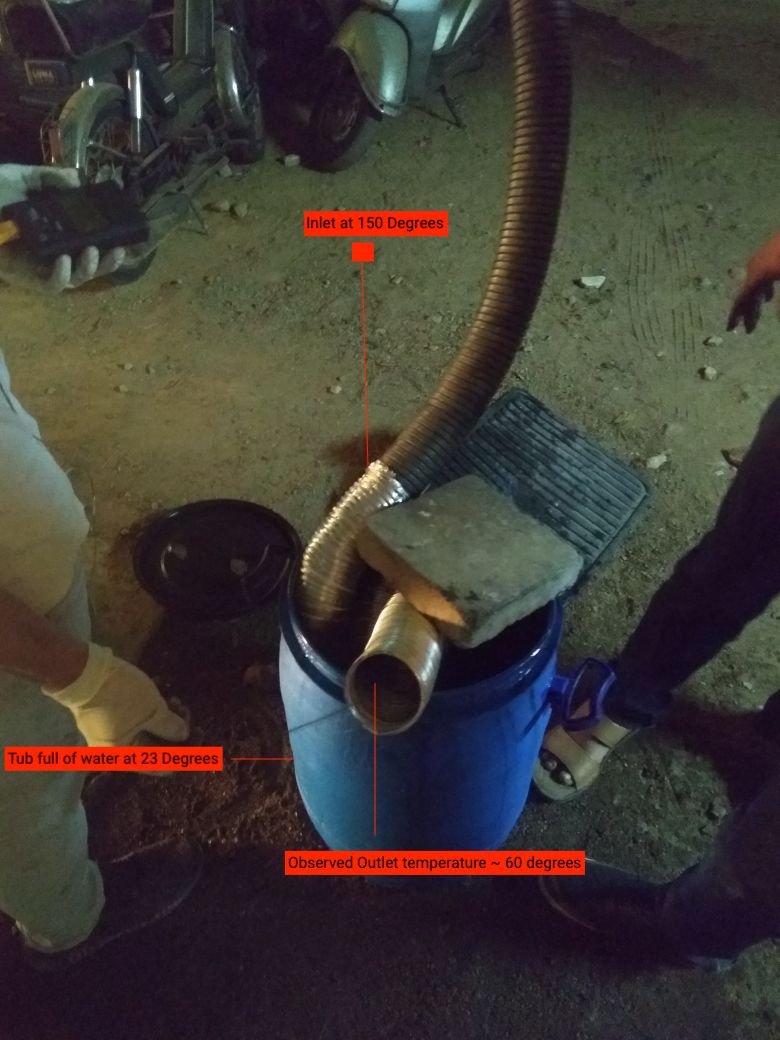 Your question is a bit open-ended, so here are a couple recommendations.

First, if possible, replace that hose with some ductwork that has finned exterior so as to dump as much heat as possible into the water, as well as directly to air. Your comment about multiple exhaust tubes touches on this, as you'd be increasing the surface area - to - volume ratio. You might run into backpressure problems at the interface, though.

Second, try to get a water container that is as long & wide as possible, both to maximize the length of tubing in the bath and to maximize the area at the water-air interface. Again, if possible use a container with finstock on the outside. This is because your overall heat problem is one of transferring heat not only to the water but also out of the water. Heat transfer depends directly on the delta-temperature, so if you can keep the water cooler, you'll be able to extract more heat from the gas tube.

With all that said, first calculate the amount of energy (heat) in the exhaust gas. You can look up the equations relating temperature, specific heat of the air, and total flow (cubic ft/minute, e.g.). Then you will know how much energy must be removed per minute to reduce the exit temperature to the desired level. The next step is more difficult: calculating the heat transfer rate for the tube--water interface. I doubt you can get a good estimate for this without running experiments. Once that's known (as a function of water temperature), along with the known specific heat of water, you can get an estimate of the amount of water required to dump the total heat load.

Your approach is not an unusual one, engine brakes to measure horsepower usually make use of such a method, but they use much bigger water barrels. To answer your questions: You just want to create as much surface as possible, as thin as possible to reduce the total heat resistance. Crumpled up pipes create more surface, adding more pipes adds more surface. The more crumpled up, the better. It's just like air filters. The crumpliness of the pipes does add a tiny bit of resistance to gas flow, but you won't notice it.

The needed amount of water will depend on the airflow from the exhaust. Assuming a 2 litre four stroke engine revving at WOT at 4000rpm and 90% volumetric efficiency, you'd get an inlet volume airflow of:

The ambient temperature you give is 23 degrees. Air at that temperature has a density of about 1.185kg/m3 at 1 bar. Assuming an absolute manifoldpressure of 1 bar at WOT, that would translate in a mass airflow of:

Air has a specific heat of 287 J/kgK, so every degree temperature drop per kilogram gives you 287 Joules of heat energy. We're not dealing with dry air, but with exhaust gas which also containt about 1/15 part fuel which has different properties. So let's take 300J/kgK for specific heat to compensate that.

A temperature drop of 90 degrees C (150-60) over our mass flow thus yields a cooling power of:

That's nearly exactly the power that the average watercooker has. You can imagine how fast the water will be heated up. We can calculate that. Water has a specific heat of about 4200J/kgK. So let's say your barrel contains 20Litre(thus ~20kg) of water, then our 1920Watts of power will heat up the water

The surrounding air also cools down the barrel in turn, but let's ignore that for the sake of simplicity here.

That means that our 20L of water will boil in 56 minutes, given that the cooling will be constant. But it won't, it will cool less and less the warmer it gets. And if you want an exhaust gas temperature of 60 degrees, you obviously have to maintain water temperature (a lot) lower than that. Let's say it can't rise above 45 degrees. That means that the water can rise 22 degrees above ambient, which gives us 16 minutes of cooling before we reach a water temperature of 45 degrees.

NB: this is a calculation that takes a lot of assumptions, and your mileage will vary wildly if the operating conditions of the engine are different from what I assumed. Fill in your own engine properties to get an idea of your situation.

My advice: create some margin, i'd recommend to find an old 200L oil barrel, and use 5 50mm aluminium hoses of about 3 metre, as shown in the picture. Create a little spacing between the hoses for water to flow between, to maximise cooling efficiency. Make a spiral of the hoses in the barrel to keep air restriction at a minimum. Observe the water temperature in the barrel to get an idea how fast it will rise to a level that it won't cool anymore. Preferably make the air flow upwards in the spiral. Thermo syphon working will keep the water circulating in the barrel for maximum cooling efficiency. You can vary the hose length to maintain your 60 degrees air output as the water temperature rises.

For non-turbo diesels, the heat budget is roughly 30% work out, 35% lost to liquid coolant loop, and 35% lost through exhaust. Turbos are a bit trickier. For a small turbo genset, I'm going to go with 40% out the manifold. If I looked up the boost at 12kw, we could estimate exhaust temps more accurately, buts lets guess 900F at the turbo exit. Essentially, we are subtracting the aftercooler heat out of the exhaust system figure. So I end up at about 32% of the fuel's HHV in the exhaust downstream of the turbo.

A Btu raises 1 lb of water 1 degree F. You aren't taking 100% of the heat out of the exhaust, either. Some water vapor will remain, and the exhaust temp is a little above ambient, giving the estimate a small cushion.

If you allow for a 20 degree C rise in water temp, you have 25 degrees C remaining for your 75C outlet. That isn't very much, but worth a look. That works out to about 926 lb of water, or 111 gallons US. As a practical starting place, 4 55 gallon steel oil drums each with a pipe loop ought to work.

A better starting point might be a non-turbo powerhead with a closed-loop, water-jacketed exhaust manifold to handle some of the load.

alright! After all the comments and what was available this is what we ended up designing 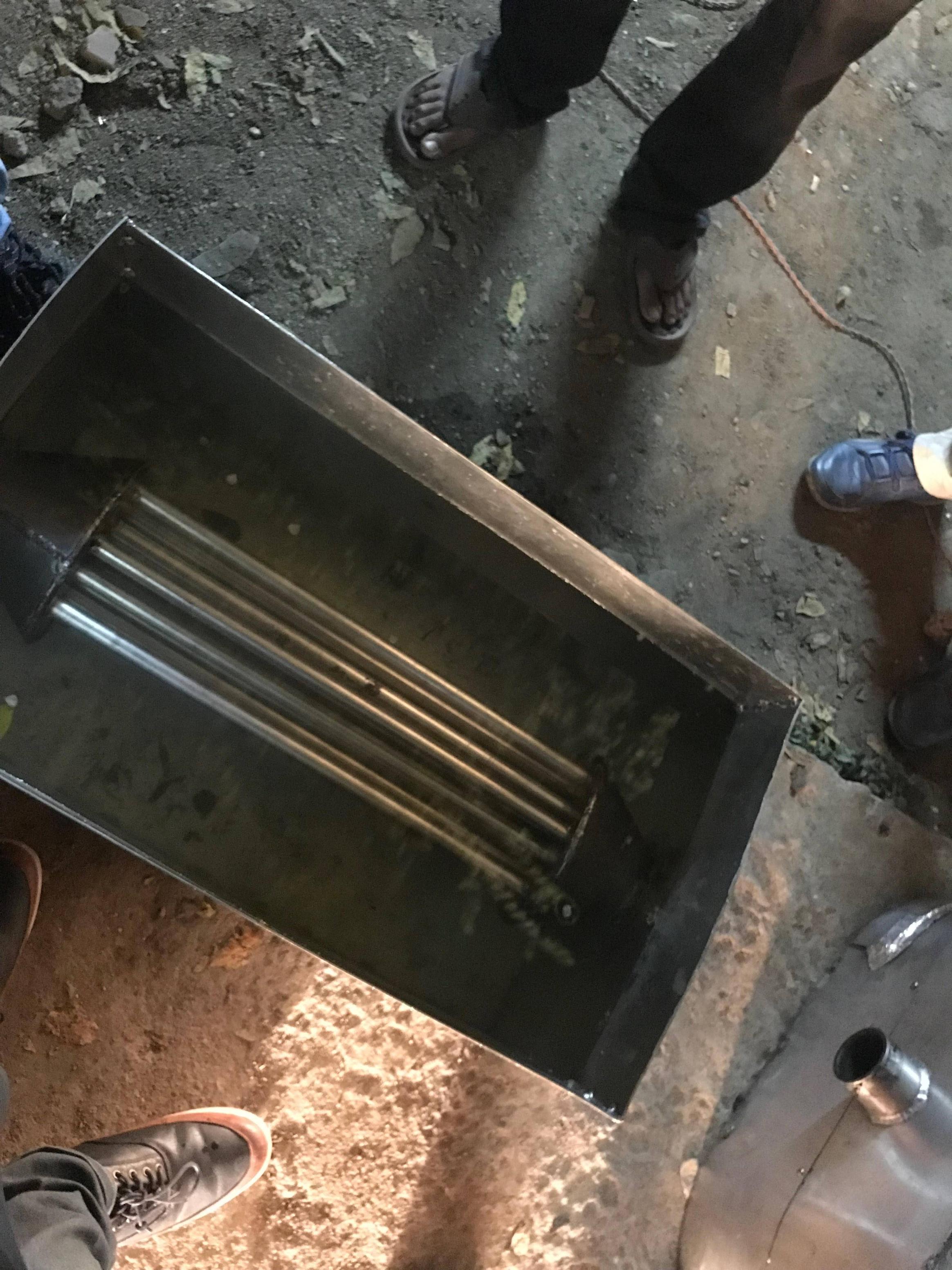 The inlet flue gas at 140 degrees was 65-75 degrees at outlet after an hour of continuous usage, with outdoor temperature as 25 degrees.

Not the answer you're looking for? Browse other questions tagged mechanical-engineering heat-transfer automotive-engineering hvac thermal-conduction or ask your own question.

0
What is the most cost efficient way to cool a tank of oil with water?
2
Hydraulic System design help/ directional valves
1
Looking for elegant ways to divert airflow
2
Insulator thermal resistance
2
Why not drive an air source heat pump domestic heating system with an auto engine?
3
Designing a Chilled Process Water System for Small Plant
5
Easily compute a good approximation of heat conductivity of cooled semi-vacuum (water vapor + air)
1
How effectively will this evaporation setup cool down the water?