Which fan / blower type should I chose?

I am creating a project where I will need to move small beans around in turbulent air flow. I will have a heat source to which I do not want the heat to leave easily (I want the beans to be allowed to heat up).

I initially tried to purchase a fan that simply had high CFM (about 400 cfm or so) but that seemed to be a poor choice as it just sucks all of my heat away and does not move my beans very effectively. This fan was simply a 120mm computer case fan. I believe my problem was that it pushes air with high velocity but with little momentum behind it.

So I feel that this article gives a pretty great definition of the different types of fans and motors. I am not product searching but rather just trying to pick the appropriate blower / fan type that would best help my application.

I think that I want low CFM and high static pressure if I am understanding correctly? Based on this I think that the squirrel cage type blowers may be good enough. Please do correct me if someone has more experience with this though.

Once a type is established, what is the best method to actually size up the right sized blower? 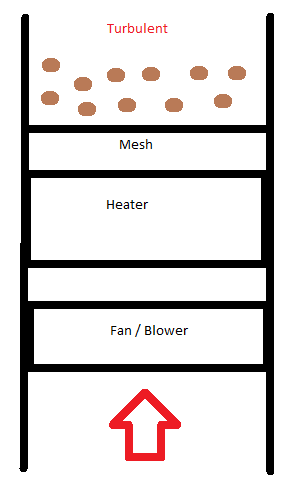 I assume you want to keep the beans suspended in the air, like they do with persons at skydive simulators.

In order to do that, you do need a high speed airflow (or CFM). The (static) pressure that the fan can maintain doesn't matter here. The high speed airflow creates dynamic pressure that acts on the beans and keeps them suspended, which is what your looking for if I understand correctly. At terminal velocity, the force that acts on the object due to drag, is equal to the force that pulls it down, which we call gravity.

Consider the following formula for the terminal velocity of an object:

Where $v$ is the velocity on an object, relative to the medium/stream in metres per second.
$m$ is the mass of the object(beans) in kilogram.
$g$ is the gravitational acceleration, which is about $9.81m/s^2$ everywhere on Earth.
$\rho$ is the density of the medium, which is 1.2kg per cubic metre for air at standard conditions.
$C_d$ is the drag coefficient of the object. This is a factor usually between near 0 and 1. It's defined by the shape and skin texture of the object. A sphere has a $C_d$ of about 0.9, so i'd expect a bean to have a $C_d$ of about 0.85. It depends which orientation the bean has relative to the airflow.
$A$ is the frontal area of the object. This also depends on the orientation of the bean.

Since we can't change the properties of the beans, nor can we significantly change the density of the air, all we're left with is the velocity as tunable parameter.

I can't find the properties of a bean in my physics book, but let's suppose it's as dense as average wood: about 700kg/m3, and that the bean has the shape of a sphere with a diametre of 8mm. (about 1/3rd of an inch) Then the frontal area of the bean will be:

The volume of the spherical bean will be:

If we fill in these values in the first formula, it gives us a velocity of:

Which means that the volume air flow must be:

I'd choose a fan that has a higher CFM rating(300CFM or so), to create a margin to make up for any errors made by assumptions in these calculations. You can always easily throttle down the fan. And also, your mesh, the heater, the beans, and any other construction will restrict the airflow, which makes it impossible for the fan to provide advertised CFM rating. That rating is probably based on an unrestricted fan. That's why you need to aim higher for CFM.

If you want to warm up the beans, i'd recommend to create a construction that makes the fan recirculate the air. So create your airduct like a donut or a square donut. Not only does it allow you to gradually heat up the air and the beans without losing your heat, it also keeps the load of the fan at a minimum.

To add onto Bart's Excellent Answer (above), we have to step out of theoretical and into applications.

Not the answer you're looking for? Browse other questions tagged airflow or ask your own question.

3
CFM in relation to Static Pressure
4
Where to place fans for maximum effectiveness in sharing air conditioning between rooms?
4
Perfectly aerodynamic kitchen range hood
6
O-Ring vs flat washer for air seal
1
Most efficient airflow pattern to cool a recessed shelf
2
What is the difference in CFM, at a given static pressure, between a CPU fan and a Squirrel Cage Blower fan when moving air through ductwork?
1
Noise in centrifugal fan
0
Squirrel-cage air blower efficiency
1
Which way to put two fans for a wood shop air cleaner - paralel or series?