I have a few questions relating to a multiple layered spinner that uses ball bearings to reduce friction, kind of similar to a fidget spinner. The image below is an example of the multilayered bearing spinner. 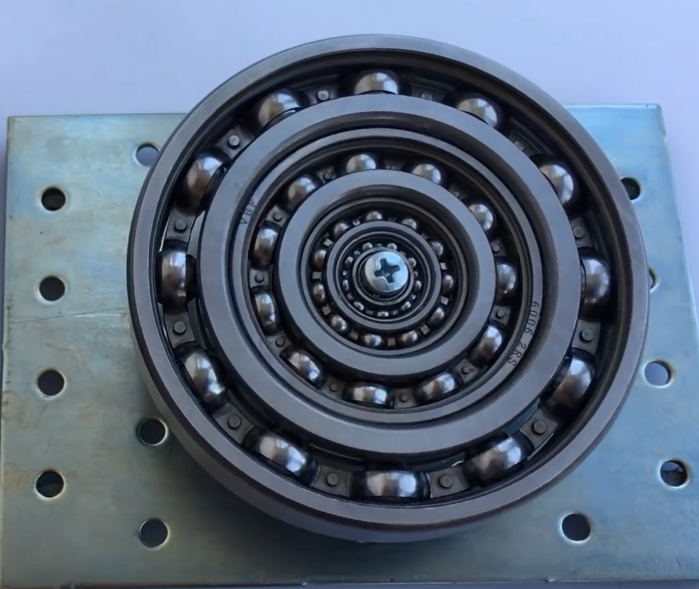 My questions are as follows:

The more you increase the number of balls and tracks increases the friction, what does change is the speed differential between the any track and its predecessor / successor - but guaranteeing that the middle tracks will share the changes of speed....

If you want a suggestion for a long life spinner : use a spinner that is supported in a magnetic field then it is basically only air friction and, if you put it in a vacuum not even that.

If you reduce the number of layers of bearings to just one large diameter, and try to add all their mass to exterior layer, you almost double the angular moment of inertia of the system, which is going to be more efficient in conserving the momentum, but also will save on the leak and waste of energy due to wobbling of intermediary layers and friction due to out of plane vibration of those layers and fluttering of them.

I better alternative would be just one thin disk or even some radial spokes leading to the ball bearing with the total mas of your system.

lets compare two cases, first one you have many many layers of rings, ilmost like a solid disk, and second one with just one large disk same size as the first case and mass concentrated on the perimeter.

Not the answer you're looking for? Browse other questions tagged friction bearings or ask your own question.

1
Blind bearing bore design
0
Designing a joint with bearing, how much do I need to protrude for the bearing to stand? With pictures
0
Name that bearing!
0
bearing keeps burning seals
1
Cascaded ball bearings
1
buying a mounted bearing determining radial vs axial load it can bear
0
Identify bearing dimensions from its bearing number
0
Appropriate bearing to spin a dove prism?