I need to bend one circular iron pipe with 4 cm diameter and 2 mm thickness as a guide rail for an electric stair lifter similar to this picture (the spiral bending part of stair): 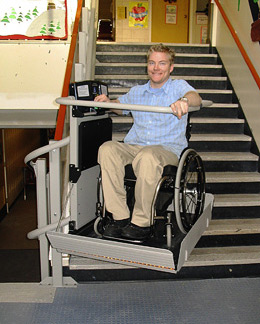 How could I bend the metal pipe as a continuous rail guide for the stair lifter device and a normal continuous stair? I tried ordinary bending devices like: 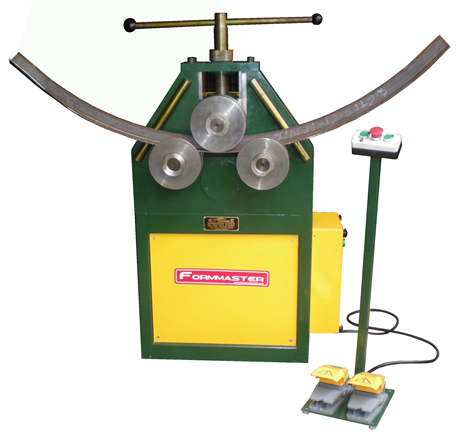 I have made one easy bending multilayer pipe (which I used for house thermal piping "The PEX-AL-PEX pipes") as a pattern for guiding the bending process, but we could not make correct bending diameters and the metal pipe does not fit as a continuous stair. I also tried changing its form from a circular to elliptical cross-section. What mathematical equations must I consider for bending it (what force vectors for 30 cm diameter with 40 cm height?) and how I could make it practical?

I tried to bend my failed sample's metallic pipe with heat and hand pressure to make it fit to the pattern but finally its circular cross-section changed with a very hard process to make an ugly continues spiral sample stair as a guide rail!

Is there a way of welding the pipe so the circular cross-section doesn't change or some kind of professional pipe bending machine used for this application? I have no access to CNC machines or anything similar to this: 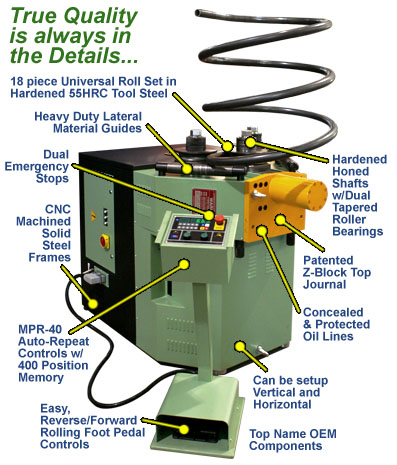 Cold bending steel, especially with a relatively thin wall, is difficult to do accurately. Typically the standard for custom parts like this is that the shape is close enough that the person installing it can bend the pipe into the final curve with the use of clamps. Then they weld it in place so it keeps its shape. I'm going to assume that you're already done the first hard part - figuring out the radius and helical pitch that you need to create, although it's not entirely clear from your question.

Using rolling benders ('three roll benders') like you've shown is one common way to solve this. One strategy for getting the right shape from those tools is to form your bend in multiple, lighter passes. That is curve it slightly once, more the next time, and more again until you get to your desired shape. Keep in mind that the same settings on the final pass will produce different curves if your start with a straight piece of pipe or one that has already been curved. Using multiple, lighter passes produces a more consistent curve throughout. You're probably aware already, but rolling benders always leave a flat segment at the end, so you need to start with a longer piece and plan to cut the two ends off.

If that still isn't accurate enough for your application, the next mechanized option would be to use a tool called a mandrel bender (see here, for examples) which supports the pipe from the inside to prevent the section from crushing or deforming too much. As far as I know, these cannot form helixes, only single-plane bends, but sometimes those can be used at an angle to approximate the shape.

If neither of those are options for you, or you need a lower cost solution, manually heating and bending is possible, although be aware that too much heat can compromise the strength of the steel. In order to prevent the section deformation you're describing, people will sometimes fill the tube with dry sand and weld a cap on each end. This way, the tube is less likely to close in on itself as you heat it and bend it. If you do this, it is very important that the sand is dry, because wet sand will generate steam which can be very dangerous. For the same reason, the end caps should not form an airtight seal with the tube, leave part of the shape unwelded. Please be careful if you attempt this method.

Not the answer you're looking for? Browse other questions tagged mechanical-engineering piping or ask your own question.

10
How do I calculate the strength of a weld joining two crossed rods?
1
Increasing the stiffnes of a structure by adding stiffener, but at the same time reducing main surface thickness
1
Trying to shed some weight on my design, any thoughts?
4
Natural frequencies of an orthotropic bending beam with circular cross-section
0
How to use the moment-of-momentum equation for water flowing through a pipe?
0
Calculate deflection of a beam with an arbitrary shape
1
Bending of an L-shaped beam
0
How to negate rotation of a rotating linear guide rail on a carriage?