Why do drag race semi trucks slant to one side?

I've been watching drag races of semi trucks and found that, especially during the initial phase of acceleration, they all bend to their right-hand side.

I understand, that the huge torque in rear wheels would lift the whole front of the truck, but why does it slant to one side? Can rotational inertia of the drive shaft be strong enough to cause such a phenomenon? 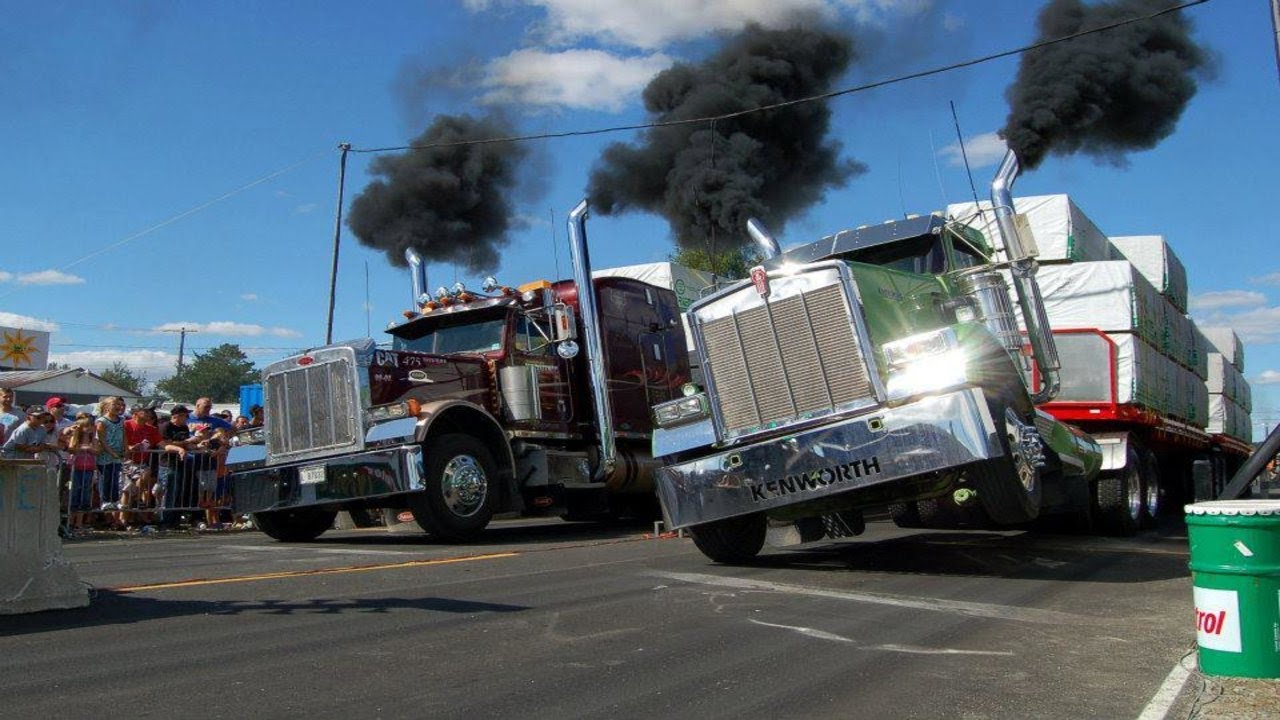 as the engine produces torque which is applied to the driveshaft, the engine block produces a counter-torque which must be blocked by bolting the block to the frame so the engine itself does not simply spin around in the sense opposite to the rotation of its crankshaft. for a fully-loaded truck starting from a standstill with a large diesel engine in it, that countertorque is huge enough to twist the frame of the truck and hoist one of its wheels off the ground, as illustrated in the OP's photo.

In this normal semi you can also see the black steel frame running from the engine mounts to the rear wheels. This solid frame provides the equal and opposite reaction torque with very little deflection or rotation. You may see 1" of suspension deflection or so when a normal semi accelerates from parked at a stop light.

The green truck in the photo is likely modified for aesthetic/theater appeal. It has a modified frame to permit that extreme rotation. This modification would actually reduce acceleration performance of the dragster (since energy is wasted in the process of lifting), but the real goal of the actors (i mean drivers ;-) is to entertain the crowd and viewers.

I think your assessment is correct. The rear wheels effectively allow the truck to 'pop a wheelie', i.e. lifting the centre of mass by a certain amount.

The frame of these trucks is flexible enough to allow some torsion, and it wouldn't take much to bias the rotation to one direction. I think you're seeing the RHS of the cab (driver's perspective) being pushed down towards the road, rather than the LHS being pulled up towards the sky. The reaction forces to the drive shaft, the weight of the driver (and associated steering components) on the RHS of the cab, etc. could all encourage the cab to tilt that way.

It is the rotational torch on the drive tires through the transmission, drive shaft, yoke and tires that lifts up the one tire not just the engine alone as stated in other answers. I have experience driving a semi-trucks to its limits loaded, unloaded and bobtail and unless the truck extremely modified the truck will never get both wheels in the air. The same why when you rev a car engine it lifts up on the direction of the rotation a little but with the transmission engaged its much more. This flexing is standard,does not hurt the frame and is designed that way to take loads on uneven terrain off road. I cannot say the same for the drive train.

The frame isn’t modified, most of these trucks work day in and day out then race at events. It’s still the same design or they wouldn’t pass inspection. It’s the amount of power they generate. They aren’t doing this just for show, they’re racing. A frame modified to twist will slow the truck down and in turn will cost them to lose races. A factory produced engine, let’s say you want big power so you opt for the 14 liter engine spec in a new truck, you’ll be around 600 hrsprs and roughly 2,050 lb ft of torque. These trucks are HEAVILY modified. Huge fuel systems, huge, multiple turbo systems, full billet transmission internals, and the list goes on. They’re pushing these engines 3 or 4 times more powerful than factory spec. Even a double frame truck is going to twist under full throttle trying to get a 120,000 pound load moving. And it’s good that it does twist. Because if something can’t absorb that much shock and force, it’ll just snap. Getting up past 4 and 5000 lb ft torque is just an unimaginable amount of power. And they don’t lift both wheels because if they did, the frame would snap somewhere around the fifth wheel. Even though the left front is up, you can see the right side is pretty light too, it’s just a long wheelbase truck and a heavy load keep it down

Go outside start your car and rev it up you will feel it pull to the right and it's all about the load. Look around you'll see the same trucks racing without trailers and they spend the tires. Once you add that much weight all that spinning has to go somewhere I don't care how strong your frame is it's going twist watch any kind of high horsepower drag racing

3
Why not use just one electric motor in a car?
2
Why do we remove (or reduce stiffness of) anti-roll bars from the front side to prevent under-steering?
1
Rigid tensioner/turnbuckle: One side tightens, but the other side loosens
1
Balancing a horizontol flat surface when weight applied to one side
2
Why do some cars have flow channels in their bodies to decrease drag?
2
Calculate maximum acceleration of a car from rest (optimum launch)
3
Why do race cars — such as Formula 1 cars — use two brake master cylinders?
2
Free body diagram of a differential-drive mobile robot
16
Why do heavy trucks use air brakes?