What are the factors limiting the height of a "tower" made of typical fired brick and mortar?

By "tower", I mean a structure whos point is to be tall, and can support a human standing on or near its top. I'm interested in the self-supporting structural aspects, not limitations of construction techniques, or environmental factors like wind loading, possiblity of earthquakes, etc. I want to understand what limits such a structure mostly from its own weight and properties of the material.

The point is to maximize height for any given land area the thing sits on. I'm trying to leave reasonable latitude for land area to understand the constraints, but let's not get silly like wrapping around the earth or end up with a star made of diamond, as a similar questions mentioned in a comment devolved to. If a maximum is required to avoid silly answers, let's say about the area of a typical Manhattan city block, with reasonable latitude on shape.

I understand this material can handle high compressive loads, practically no tension load, and has a high density as building materials go. My gut feel (I'm a electrical engineer, not so fluent with structural engineering) is that the optimum (least material for highest result) shape would be a circular crossection, probably with exponentially decreasing diameter with height. How well does that scale due to ground loading? What if this is built on bedrock? Wouldn't that be about the same properties, if not better, than the brick and mortar? Would that allow scaling some shape aribtrarily, or do the proportions of the shape change with size?

since the structure is loaded only by its own weight, the limiter will be the maximum compressive strength of the material, beyond which the bottom floor gets crushed. as pointed out by others, this can be at least partly mitigated by tapering the sidewalls. in any case, knowing the compressive strength, the density, and the dimensions of the tower, its height at the point of compressive failure of the first floor can be calculated.

I'll give you an example I first read in Gordon's book "The science of new materials".

Assume you want to build a tower as high as possible, of constant cross-section A (the easiest shape to think is a cylinder going up). Assume the material (Stone) has the following properties:

Let's say that H, is the height of the cylinder.

The total mass is:

The total weight of the tower is:

substituing the values, for granite you would get that the maximum height is just over 7.4 [km]. That, is the calculation per your request to not include te limitation of construction (earthquakes, wind etc).

For this analysis, the tower cross-section shape (the floor) shape does not come into play. However, you are right that probably a circle due to its double symmetry and lack of corners would probably be best, followed closely by a equilateral triangle.

That is a totally different ball game. A solid structure will not perform so well compared to a structure which mimics the structure of Euplectella aspergillum. Aparrently their structure offers significantly higher buckling resistance to weight ration 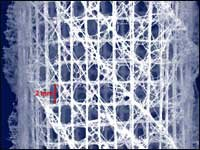 Additionally the other way that you could go (macroscopically) is build a pyramid. If you noticed, in the calculations above, the maximum tower build out of stone would be only 7.4[km], while mount Everest is close to 9[km]. This is because, Everest has a pyramid like design. The compressive forces on the bottom layer are applied to a larger area, leading to a layered design that can reach significantly higher heights.

There is a brick building in Chicago that is claimed to be the tallest that brick can build ( without crushing the bottom). It is about 200 ft. But it will have the additional weight of floors and other interior components, so I guess it is not quite an answer.

The compressive stress is, of course, a factor, but if we consider a simple brick wall, then this H calculation would not suffice since there is lateral stability to consider as well surely, any misalignment or lateral force e.g. crosswind would compromise height a lot I think.

Contrary to the claim made in another answer, there are many brickwork buildings (without a steel or concrete structure) higher than 200 ft. e.g.:

So even with medieval technology you could build in brick up to an impressive height, and with modern engineering knowledge and production techniques you can probably build Manhattan-height buildings in brick.

3
Is there a theoretical bound to how tall a structure can be built?
1
How do you account for buckling in a brick and mortar structure?

7
Boundary condition for a parallelogram-shaped excavation on an embankment
3
First glance: structural integrity of this roof
9
Steel selection for building a trailer
0
What lining design holds better for a tunnel? Spiral lining or cylindrical lining?
2
Cooling tower for nuclear power plants
1
How do you account for buckling in a brick and mortar structure?