I'm still not sure if the two standard are really comparable though. I don't know what the particulate size is for EN 1822, nor am I sure what is the difference between "integral value" and "local value" for the emissions under EN 1822. The latter in particular is somewhat worrisome because it carries a footnote that allows manufacturers to change this by agreement with the purchaser, which I suspect some may turn into a sort of click-wrap agreement.

Or maybe there's something else that I'm missing because I've found a comparison that puts the Mil Std 292 numbers below those from EN 1822, so I guess there's a difference in testing methodology that accounts for this. Does someone know the details to clarify? 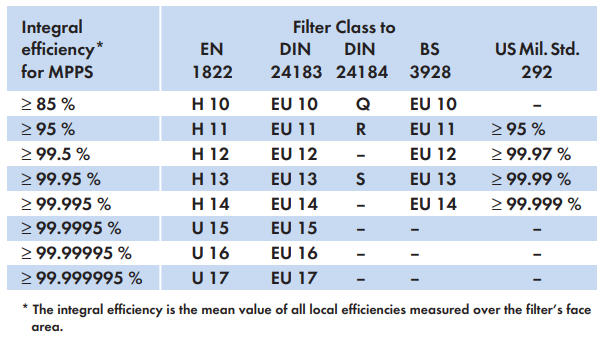 This latter table surely refers to pre-2009 versions of EN 1822, as no year is stated anywhere in the document and has "H12" and so forth in it. A similar version but using the newer EN terminology can be found on the website of a different manufacturer, but oddly there's a E11 but H12 in there. These tables don't inspire much confidence because I'm not sure 292 is even the US Mil. Std. number for HEPA filters, (the 292 standard is about rockets). Different documents state it as Mil Std 282, which is indeed about fitlers for protective cloting... but otherwise the equivalence stated is about the same [H]EPA 12 being the same as the US HEPA of 99.97%. 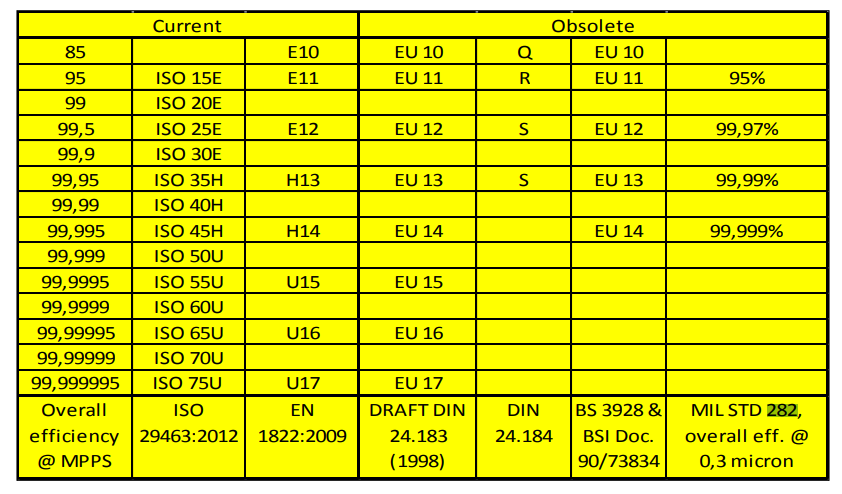 Is this correct though, and if it is what in the testing method explains the difference?

(Partial answer) it does look like the efficiency depends convexly on particle size, and has a minimum at MPPS (most penetrating particle size);

So that could explain the difference in standards. There's one 1982 LLNL tech report that says that for design considerations, the particle size should be lower at around 0.21 um, at least for a class of (single-fiber) filters

In this paper the published results of several experiments are compared with a modern filtration theory that predicts single-fiber efficiency and the particle size of maximum penetration. For high-efficiency particulate air (HEPA) filters used under design conditions this size is calculated to be 0.21 ..mu..m diam. This is in good agreement with the experimental data. The penetration at 0.21 ..mu..m is calculated to be seven times greater than at the 0.3 ..mu..m used for testing HEPA filters.

I will accept another answer if someone provides a better (or more in-depth) explanation.

Not the answer you're looking for? Browse other questions tagged standards air-quality or ask your own question.

4
How do cyclonic vacuum cleaners maintain collection efficiency with constant motion and changes in orientation?
3
Industry standard for AC wall electrical box space
0
C15 Equivalent material in IS standard
2
Which vibration standard is the most common for transported packages?
1
What is the shelf life of HEPA filters?
0
What standard and/or code covers building stormwater management?
2
Standard vs code