Difference in shear stress - one bolt vs two

So i have a little diagram to visualize: 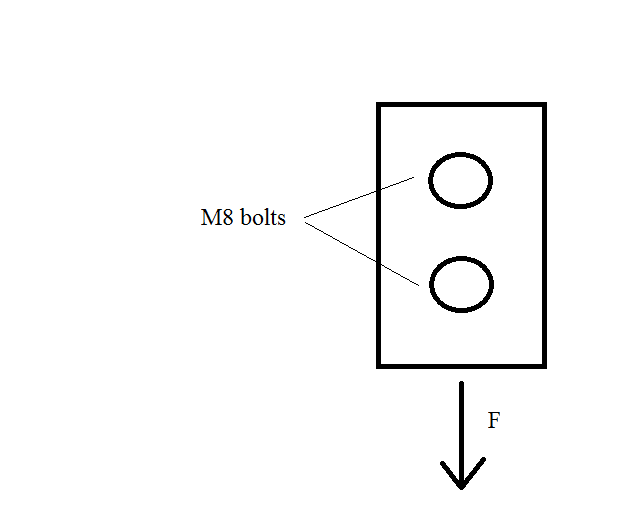 So lets say i have a 20 mm plate connected with two M8 bolts, and i apply a 30kN force in the direction shown in picture. Question is - would the force be equally distributed between bolts - i.e., each bolt will have a 15kN of shear stress? Or each bolt will still take full stress of 30kN?

Assuming a material like cold rolled steel: The steel will yield and deform slightly at small points of very high stress , equalizing the load/stress. So the bolts will have very similar loads. This plastic deformation and cold work is what makes steel so useful or "forgiving".

From an analytical standpoint, all that can be inferred is that the sum of the forces acting on the bolts must be equal to the applied force of 30 kN. This equality must be satisfied.

To see why, don't look at the bolts, but at the plate. It suffers the effects of three different forces: the applied 30 kN force at the bottom (let's call it $P$), and the reactions of each of the two bolts (let's call them $R_A$ and $R_B$). If the sum of all of these forces (let's call it $F$) were not zero

Are the holes / bolts a machined fit? If not then one is most likely taking more stress than the other.

However, when engineers do this type of analysis they take the load and divide it equally between the bolts.

A similar result is obtained when you have one bolt and three plates ie the middle plate is sandwiched...

Not the answer you're looking for? Browse other questions tagged structural-analysis statics shear or ask your own question.

5
Why do we ignore horizontal reactions at roller supports?
2
What is the difference "maximum" shear stress and shear stress
1
Determining when bolt will bend
5
Shear Force Diagram of a Simply Supported Beam with triangular load distribution
1
How to find the diameter of bolts in a flanged joint?
0
Determining max shear stress
0
Can a beam be too short to experience bending stress?
3
Difference between shear flow and shear stress
0
How does shear/viscous stress change in liquids as applied shear force is changed?
6
Metric bolt shear strength for a layman